from Turkey(Turkiye) football(soccer) Column and News by Ahmet B.Tur by Ahmet Turgut
Good news to Besiktas fans and some others …. 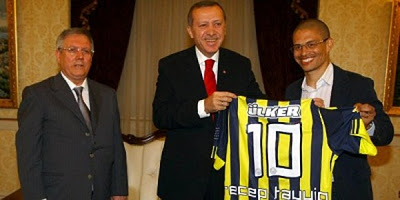 Turkey’s governing AKP tamed the army, castrated the media and dominated the judiciary, but is it cracking against a football club? Fenerbahçe President Aziz Yıldırım, Turkey’s Prime Minister Tayyip Erdoğan and the club’s best footballer Alex de Souza in the good old days…

Turkey’s Justice and Development Party (AKP), which has been governing the country since 2002, has finally “cracked,” according to many observers.

by M.A.M
Download the Full Text Submitted to the Court in Istanbul.

Turkey’s parliament is poised to override a presidential veto and approve a reduction in prison terms for match-fixing, a move that could lead to lighter sentences for suspects in a recent rigging scandal.The country’s ruling and two main opposition parties say they will again vote for the new reduced term of a maximum three years in prison later Friday.

The fate of match-fixers

from Today’s Zaman, your gateway to Turkish daily news :: Columnists by FATMA DİŞLİ ZIBAK
As Parliament on Saturday approved a sharp reduction in prison terms for match-fixing and hooliganism, after amendments to the law on match fixing and violence in sports was vetoed by President Abdullah Gül, the debate on the match-fixing law continues at full speed.