from AL JAZEERA ENGLISH (IN DEPTH)
Al Jazeera takes a closer look at why the eurozone debt crisis matters, and possible solutions to the problem.

from BBC News | Europe | World Edition
US and European markets fall sharply after Monday’s announcement of a Greek referendum on EU moves to solve its debt crisis.

French President Nicolas Sarkozy was reported to be ?dismayed? by the news that Papandreou would call a referendum on the bailout deal. Sources close to Sarkozy said, ?The Greek?s gesture is irrational and, from their point of view, dangerous.? According to the Presidents office, a phone call on the referendum will take place later today between Sarkozy and German Chancellor Angela Merkel. The German government has so far refused to comment on ?internal political developments in Greece.?

from Hurriyet Dailynews by ATHENS – Reuters
Greece?s prime minister won the backing of his cabinet yesterday to hold a referendum on a 130 billion euro bailout package but will find the stunned eurozone leaders who engineered the deal last week harder to convince.

Greek Financial Crisis and Anti-Austerity Protests: The Story So Far

from Global Voices Online by Asteris Masouras
This post is part of our special coverage Europe in Crisis.
After a year and a half of desperate rescue negotiations and bailout tranches doled out by the International Monetary Fund, the European Central Bank and the European Union, the intractable and increasingly ineffective austerity measures imposed by the ?troika? (three) on Greece’s socialist government, have been met with unrelenting protests. The drama of the European sovereign debt crisis with Greece in its center is coming to a head, as politicians desperately seek options to disentangle the European Union from mounting debt.

by Grahnlaw
Telecoms networks and services are sorted under the Commission’s Information Society web pageseCommunications. There the web page 15th Progress report on the single european electronic communications market – 2009 offers you access to the communication COM(2010) 253 in 22 EU languages, as well as to the two parts of the accompanying Commission staff working document SEC(2010) 630 final/2 with much more detail (English only), including the Country chapters (Annex 1 in Part 1 or separately).

BERLIN — The eurozone is at the center of the global financial crisis, because only there, in the realm of the second most important currency after the dollar, does the crisis hit a weak ?structure? rather than a state with real power. It is a structure that is squandering the trust of citizens and markets in its ability to resolve conflicts — while pushing the international financial system to the brink of disaster.

by Open Europe blog team
We?ll be updating this blog throughout the day with details on the state of the Greek government and the Greek Prime Minister given recent rumours about a change in both. We?ll also cover the dwindling prospects of the Greek referendum ever being held. All times are in GMT.

from Ideas on Europe by Protesilaos Stavrou
The package of measures that was announced in the latest Euro summit, was an agreement on certain policy areas that European leaders consider important, however it never was the sort of ?comprehensive solution? that Merkel and Sarkozy had promised a week earlier. The package lacks vital details in just about every aspect. It nevertheless places the foundations for steps towards three directions (i) Greek debt restructuring, (ii) private bank recapitalizations, (iii) leverage of the EFSF. Since the very beginning and after analyzing paragraph by paragraph the official document about the Main results of the Euro Summit, I concluded that the new plan will die at birth for four reasons.

by Asteris Masouras
This post is part of our special coverage Europe in Crisis.
The Greek ?haircut? debt deal reached by European politicians and banks after a year and a halfof agonizing negotiations and unpopular and ineffective austerity measures, has been touted as a solution to stem the sovereign debt crisis. 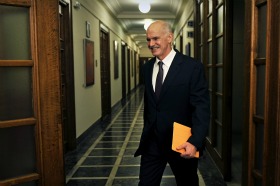 Top news: When European leaders announced a plan to solve the continent’s sovereign debt crisis last week,financial markets soared. But that optimism quickly receded on Tuesday when Greek Prime Minister George Papandreou announced that he would hold a popular referendum on the $180 billion Greek bailout. Papandreou secured his cabinet’s support for the surprise plan during a meeting that lasted until the early hours of Wednesday morning, but criticism from the opposition and some members of his own party suggest the Socialist Party leader might not survive a no-confidence vote in parliament on Friday.

from euro|topics
Greek Prime Minister Giorgos Papandreou will hold the planned referendum despite massive criticism and plunging share prices around the world. His cabinet approved the referendum on the austerity measures on Tuesday. While some commentators say Papandreou is acting irresponsibly with regard to Europe, others praise what they say is a stony but necessary path to democratic legitimation.

from Blogactiv by Protesilaos Stavrou
The package of measures that was announced in the latest Euro summit, was an agreement on certain policy areas that European leaders consider important, however it never was the sort of ?comprehensive solution? that Merkel and Sarkozy had promised a week earlier. The package lacks vital details in just about every aspect. It nevertheless places the foundations for steps towards three directions (i) Greek debt restructuring, (ii) private bank recapitalizations, (iii) leverage of the EFSF. Since the very beginning and after analyzing paragraph by paragraph the official document about the Main results of the Euro Summit, I concluded that the new plan will die at birth for four reasons. …

Greece to vote on euro membership

from FT.com – World, Europe
Europe’s leaders scrambled to overcome fresh fears about the future of the eurozone at a summit of world powers in France

EU or eurozone exit and chaotic default for Greece?

by Grahnlaw
Few have ignited as much pan-European debate as George Papandreou, who remains prime minister of Greece at least until Friday evening. Not only mainstream media are full of reports, but multilingual Bloggingportal.eu is teeming with contributions from eurobloggers. Here are a few euroblog posts.

from euro|topics
Athens will receive no more financial help before the referendum in early December. German Chancellor Merkel, French President Sarkozy and IMF head Christine Lagarde were clear on this point after their crisis meeting on Wednesday evening in Cannes. Such tactics are justified to pressure Greeks into voting for the Eurozone, commentators write.

Until now, the EU Asylum Qualification Directive 2004/83/EC of 29 April 2004[1]foresaw in art. 10 par. 1 (d) that ?gender related aspects might be considered? by national asylum authorities when examining the potential persecution of specific social groups in their country of origin. Therefore, discretion was given to the authorities assessing the asylum claim, on whether to take into consideration the gender orientation or gender identity.

from Blogactiv by Florian Pantazi
The decisions agreed upon by EU leaders during the 26th of October summit ? the leveraging of EFSP, the ?voluntary? 50 percent reduction of Greece?s debt, improved coordination of fiscal policies within the eurozone countries, the appointment of a super-commissioner with fiscal oversight responsibilities ? have all been judged as steps in the right direction by the financial community. Stock markets have reacted positively and so have a few major rating agencies.

A Greek Referendum Probably Won?t Help; but it Could

from Ideas on Europe by euro-thoughts
At the end of last week, it seemed that the biggest news on the Eurozone debt crisis would be the backslide in markets following initial positive reactions to the agreement that came out of last Thursday?s summit. However, Greek Prime Minister George Papandreou put paid to that assumption by announcing plans to hold a referendum on the agreement, so that the Greek people could have their say over whether to implement it. Papandreou?s counterparts across the Eurozone and EU seemed genuinely stunned by this news, though German Chancellor Angela Merkel and French President Nicolas Sarkozy reacted promptly by summoning Papandreou to Cannes for emergency talks.

by Asteris Masouras
This post is part of our special coverage Europe in Crisis.
Unprecedented protests in many Greek cities on October 28, 2011, disrupted parades by the military and school pupils held for the national celebration of ?Ochi Day? (No Day). In Thessaloniki, the president departed his post at the dignitaries’ podium after the parade was brought to a halt by protesters, some calling him a traitor, while in Athens, pupils marched holding mourning black armbands aloft.

from Ideas on Europe by Protesilaos Stavrou
The latest summit did not produce a comprehensive solution as many expected (see The aftermath of the October 26 Euro Summit ? No Solution). Apart from the consensus on certain policy areas and despite the vague figures and numbers that are not backed by any tangible plan; the decisions of the summit are full of gaps, with vital details remaining open to further negotiations. One of the few issues that is explained in some greater detail is the process of bank recapitalizations (see Annex 2 of this 14-page document that contains the official decisions of the latest summit). The positive aspect of this plan is that it finally accepts, with great delay, thatEuropean banks are quasi-bankrupt and are in desperate need for capital otherwise they will continue to destabilize the system. The negative is that the process of recapitalizations is designed in such a way that will produce adverse effects and recession in the short-to-medium term.

The ECB is still very much in the game

from A Fistful Of Euros » A Fistful Of Euros by Alex Harrowell
It was widely reported last week that the Bundestag had ?ruled out? or set a ?red line? against any further ECB intervention in the market for government bonds. This is nonsense, and based on the common practice of not reading German. The vote, which for a start was a vote taken after debating a statement from Angela Merkel and not anything more concrete, expressed the Bundestag?s agreement with a text containing three statements. The first of these is under the heading ?Sachverhalt? (Factual Background) and summarises the current state of play with regard to the EFSF.

by Grahnlaw
The Digital Agenda for Europe was accompanied by a Commission staff working document known as:

Both Volume 1 (general ICT competitiveness report) and Volume 2 (ICT country profiles) of the Commission staff working document 17.5.2010 SEC(2010) 627 have been published together in a glossy version.

by Grahnlaw
Competitiveness is as important as sustainable public finances for the member states of the European Union. Indeed, growth and jobs are key to higher revenue, less expenditure and better budget balance.

Information and communication technology (ICT) is a key to progress, and the EU offers an institutional framework for mutual learning.