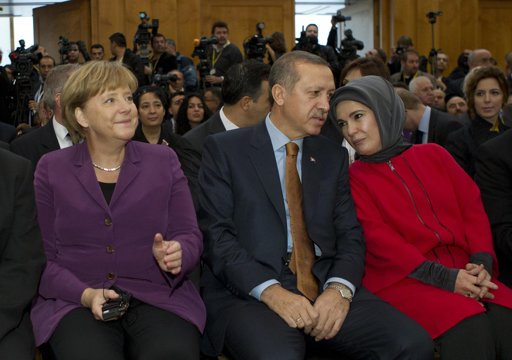 German Chancellor Angela Merkel (L), Turkey’s Prime Minister Tayyip Erdogan (2nd L) and his wife Emine attend a ceremony marking the 50th anniversary of the German Turkish labour pact in Berlin, November 2, 2011. Turkish Prime Minister Tayyip Erdogan arrived in Berlin on Tuesday to join 50th anniversary commemorations of the labour pact which brought hundreds of thousands of Turks to then-West Germany to power its post-war industrial boom. The Turkish-German deal, signed on Oct. 30 1961, was particularly significant to West Berlin, which just two months earlier found itself encircled by a wall built by East Germany’s Communist authorities to prevent its citizens from slipping to freedom through the western half. REUTERS/Thomas Peter

by By SOUAD MEKHENNET
Turks who became guest workers in Germany 50 years ago recalled the experience, which neither country realized would usher in profound and lasting social change.

My first day in ‘Almanya’

Baha Güngör heads Deutsche Welle’s Turkish Program
DW’s Baha Güngör came to Germany from Turkey – where everyone told him the Germans would be good to him – when he was a child. He remembers the long journey 50 years ago, and recounts how his life unfolded in Almanya.

by ŞAHİN ALPAY
Recently, I have been hosting an increasing number of foreign visitors. During the past week alone I have met with academics, analysts, diplomats and others coming from Spain, the United States, Greece, Japan and even Australia. ?What?s happening in Turkish foreign policy?? was their common question. Readers may be interested to know what my response to this question mainly is.

by By LIAM STACK
Turkey is hosting the commander and dozens of members of the Free Syrian Army, a group waging an insurgency against President Bashar al-Assad, and allowing them to orchestrate cross-border attacks.

The Hazards in Turkey’s New Strategy

by By JUDY DEMPSEY
Turkey’s past ”zero problems” strategy in practice meant dealing with autocratic regimes. The Arab Spring has forced a shift to supporting human rights and a look at its own problems with the Kurds.

from Today’s Zaman, your gateway to Turkish daily news :: Interviews by Ramazan Gözen*
There has been increasing military activity in Turkey?s foreign policy for the past couple of months.

from World news: Turkey | guardian.co.uk by Egemen Bağiş
The EU should stop blocking Turkey’s accession. Together we can create a more open, tolerant and prosperous Europe
Last week the European Union released the 2011 progress report on Turkey, the annual snapshot of Turkey’s reform process as an EU candidate country. Unfortunately, this year’s report seems to have had difficulty capturing the rapidly transforming image of Turkey.

Interview with Dr. Şakir DİNÇŞAHİN on the Jewish Minority in Turkey during the Second World War

Having visited a number of key European capitals over the past few months, during which I met government officials, politicians, opinion framers and ordinary people of all kinds, the conclusion I have drawn is that Turks need to understand better what is happening in Europe.

50th anniversary of Turkish migration to Europe: from expatriates to immigrants by Recep Korkut

from Today’s Zaman, your gateway to Turkish daily news :: Interviews

A tribute to Turkey | The News Tribe

Will Turkey align with Germany or France?

by ABDULLAH BOZKURT
Because of the cyclical nature of history over the centuries, we find ourselves at yet another bend in the road as we witness new emerging powers in the world while at the same time watching existing ones continue to bleed. No doubt, Turkey, along with Brazil, China, India and South Africa, is on the upswing while the US and many European states are struggling to cope with the shifting ground beneath their feet. The economic woes of the West are merely a sign of what may be coming further down the road.