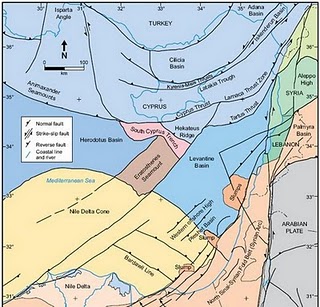 Mavi Boncuk | The Tamar natural gas discovery will supply the Israeli domestic market for decades. Currently appraised at 8.4 trillion cubic feet (Tcf) Tamar is expected to deliver its first sales in 2013.Lying to the north-west of Tamar, Leviathan holds around a further 16 Tcf, almost all of which could be slated purely for export. According to businessman Yitzhak Tshuva, part owner of Leviathan, its gas too will be ready for production by 2013, well ahead of schedule. But even at a combined total of 25 Tcf, Tamar and Leviathan only represent around a fifth of the 122 Tcf the US Geological Survey estimates lies in the Levantine Basin, much of which falls within Israeli jurisdiction.

from NYT > Turkey by By SEBNEM ARSU
In the face of menacing warnings from Turkey on Monday, the Greek Cypriot government said it was proceeding with exploratory drilling for oil and gas off the coast of the disputed island.

from Journalist in Turkey, background articles, news and weblog about by Fréderike Geerdink

Turkey?s Minister of Foreign Affairs, Davutoglu, still defines the foreign policy of his country as ?Zero problems with the neighbours?. But even though this approach quite well described Turkey?s international relations for the last couple of years (which you can read about in the article I published last year), by now it?s more of a […]

The three-nation ?Arab spring? swing of Prime Minister Recep Tayyip Erdoğan and the last-minute display of opportunist and indeed knavish Libya trip of the British premier and the small man of the Elyse Palace demonstrated once again one major issue at stake: The devastating greed of imperial mentality.

Erdoğan’s secularism or ‘Secularism as Disaster’

The Prime Minister Recep Tayyip Erdoğan is only to be celebrated for being wise and courageous to advise ?secularism? and democracy to Egyptians.

Erdoğan does not let go of Israel

Prime Minister Recep Tayyip Erdoğan does not have the intention to let go of Israel. He will chase the Netanyahu government until the Gaza blockade is lifted.

UK’s ex-minister: Israel should have apologized

Israel should have apologized to Turkey for its deadly raid on the Mavi Marmara aid ship, but instead allowed relations to deteriorate, according to United Kingdom?s former Foreign Secretary Jack Straw.

UK’s ex-minister: Israel should have apologized

Israel should have apologized to Turkey for its deadly raid on the Mavi Marmara aid ship, but instead allowed relations to deteriorate, according to United Kingdom?s former Foreign Secretary Jack Straw.

The main opposition?s deputy leader, Faruk Loğoğlu, has slammed the government for trying to increase its support inside Turkey by pursuing anti-Israeli policies

by By ANTHONY SHADID

Turkey?s foreign minister offered his vision of a new order for the Arab world, where the country?s former allies in Syria and Israel fall into deeper isolation.

The difficulty of being friends with Israel

For a long time Israel?s neighbors did not recognize Israel. There have been wars waged because of it.

An assessment of Turkish arrogance towards the Republic of Cyprus

Turkey has been producing a lot of noise lately with respect to a number of actions taken by the Republic of Cyprus regarding its sovereign power over its Exclusive Economic Zone (EEZ) and its upcoming EU Presidency on the second semester of 2012.

From the perspective of right-wingers in the United States and Israel, Prime Minister Recep Tayyip Erdoğan is ?a radical Islamist whose credentials to this effect are confirmed in his support for Iran and Hamas.?

Israel should have apologized full-heartedly

I sat my final law examinations at the University of Leeds in June 1967. In between revision, and the examinations themselves, I became glued to my radio, to listen to the latest twist in the Arab/Israeli ?Six Day War.?

Turkish Prime Minister Recep Tayyip Erdoğan?s redefinition of secularism, rather laicism, during his visits to Egypt, Tunisia and Libya last week sparked a lively debate not only in those countries (we can spare Libya, which remains in civil war) but in Turkey as well.

from Today’s Zaman, your gateway to Turkish daily news :: Columnists by ERGUN BABAHAN

?From the moment he stepped off his jet in Cairo Tuesday night to find thousands of Egyptian fans shouting ?God is great,’ this was far more than a routine visit by a foreign leader.? Canadian newspaper The Globe and Mail on Saturday ran a headline reading ?The Middle East’s new emperor,? accompanied by a big photo of Turkish Prime Minister Recep Tayyip Erdoğan. The news analysis began with the sentence I quoted above.

The Arab Spring uprisings and Palestine?s bid for statehood at the United Nations are reshaping the political dynamics of the Eastern Mediterranean region, but perhaps nothing is more important than the newly assertive role of Turkey and its split from Israel, reports Danny Schechter.

Amid tensions, U.S. and Turkey move forward on missile defense | The Cable