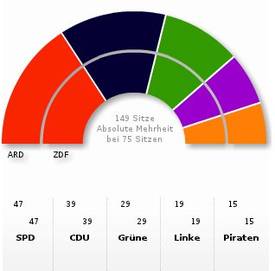 Chancellor Angela Merkel who handed her sixth election defeat this year in Berlin while her coalition partner, the Free Democrats, who favor euroskeptic tactics, failed to clear the 5 percent threshold needed to win seats. The Greens, who have criticized the FDP?s stance on the eurozone, won 17.6 percent, up from 13.1 in 2006

The meeting of the EU’s finance ministers and central bank bosses in the Polish city of Wroc?aw ended on Saturday. Discord reigned over whether to tax financial transactions, and the decision to pay the next bailout instalment to Greece was postponed. While some commentators say the participants’ indecisiveness is highly dangerous, others see some positive signs, particularly from Germany.

Investor concern about Greece?s finances and the heavy defeat of German Chancellor Merkel?s conservatives in a regional vote has taken its toll from European equities

by BERLIN
German Chancellor Angela Merkel has called on Christians to unite against the advance of secularism ahead of a visit from Pope Benedict XVI to his native Germany.

After Libya: Consequences, futures and options

from Ideas on Europe by European Geostrategy
By James Rogers and Luis Simón
As the British-French led coalition organised through the Atlantic Alliance reaches an endgame in Libya ? with the removal of the regime of Colonel Gaddafi in Tripoli ? the time is right to consider some preliminary ?big? and geopolitical consequences of the war, as well as potential futures and options:

“How is Austerity Greece doing?” by Henning Meyer

from Social Europe Journal » Blogs by Henning Meyer
There are two very interesting new publications by the International Policy Analysis Unit of the Friedrich-Ebert-Stiftung authored by Nick Malkoutzis. The first one is entitled ?Greece a Year in Crisis?. The basic findings are: Greece has taken significant steps towards getting its

from Social Europe Journal » Blogs by Fredrik Jansson
On Monday, Norwegians went to the ballot boxes in the local elections. The election was a success for the Labour Party, which had its best election in 24 years. Prime Minister Jens Stoltenberg said on election night: ?The election campaign we?ve just put behind us is one of the most special

The euro: Reaching the endgame?

Eurozone policy-makers, especially German and Dutch ones, have been unable to rise above hubris and moral posturing, leaving the eurozone with very little ammunition to confront the coming financial storm. They have stubbornly dug in their feet, preferring to deepen the crisis than to admit their mistakes. This makes a fracturing of the eurozone almost inevitable. And it will not simply be Greece (and possibly Portugal) leaving, as some German and Dutch policy-makers appear to think. This is wilfully naive. This threat goes right up to and includes France. A ?core? could be very small indeed, comprising just Germany, the Netherlands, Austria, Finland and Luxembourg. France and Germany would no longer share a currency.

“And more on the Eurozone Endgame” by Henning Meyer

from Social Europe Journal » Blogs by Henning Meyer
I was on BBC News yesterday to react to Christine Lagarde?s press conference in Washington

VIDEO: Greek cabinet meets to discuss crisis
from BBC News | Europe | World Edition
Greek Prime Minister George Papandreou has chaired cabinet crisis talks, a day after cancelling a trip to the US amid growing fears over the debt crisis.

The Annual Activity Reports of the European Commission

from Ideas on Europe by Ronny Patz
From time to time you stumble over interesting types of documents of the EU institutions, such as the European Parliament Library Briefings.

from BBC News | Europe | World Edition
The US Attorney General Eric Holder has defended the sharing of personal data between the EU and US, during a hearing with the European Parliament’s Civil Liberties Committee.