Lieberman May Become the New Qaddafi of the Middle East 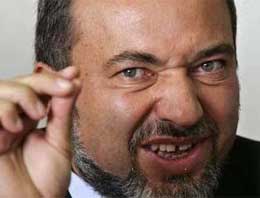 If the Turkish government is acting irrationally nowadays, then the Israeli government -or at least a key part of it- is sheer crazy.

Jerusalem fights back: Foreign Minister Lieberman formulates series of tough moves in response to Turkish steps; Israel to cooperate with Armenian lobby in US, may offer military aid to Kurdish rebels

from Yahoo news
ANKARA (Reuters) – Turkey’s plan to flex its naval muscles in the eastern Mediterranean risks being perceived as an over-reaction in Ankara’s dispute with former ally Israel and as an assertion of regional power that could alienate even its new Arab admirers.

Egypt declares state of alert after Israeli embassy broken into

from World news: Turkey | guardian.co.uk by Harriet Sherwood
Storming of building comes after demonstrations two days before Turkish leader Recep Tayyip Erdogan visits country
Egypt declared a state of alert early this morning after a group of 30 protesters broke into the Israeli embassy in Cairo last night and dumped hundreds of documents out of the windows.

Time to blockade the real ‘threat’
Ahram Online
The flotilla did not seek to travel to Israel, let alone ‘attack’ Israelâê¦ Israel could have diplomatically engaged Turkey, arranged for a third party to verify there were no weapons onboard and then peacefully guided the vessel to Gaza

Point of no return: Israel ‘must prepare for massive influx of Turkish Jews’

Is Erdoğan the new Nasser?

from Hurriyet Dailynews by HDN
Gamal Abdel Nasser?s remarkable string of successes propelled him to dominate Arab world throughout the 1950s thanks to the power of long-distance audio broadcasting.

Expert: ‘US won’t allow Turkey and Israel to clash’

from Hurriyet Dailynews by ISTANBUL
The United States which has its 6th fleet in the Mediteranean Sea, will not let Turkey and Israel stage an armed clash, says Professor Hasan Köni, an expert on international relations.

from World news: Turkey | guardian.co.uk by Harriet Sherwood
Speculation grows in Jerusalem over Turkey prime minister’s trip to Cairo amid concerns it could deepen regional tension

Mavi Marmara and our faults

from Today’s Zaman, your gateway to Turkish daily news :: Columnists by MARKAR ESAYAN
The Mavi Marmara has become a bleeding wound, not only for Muslims but also for those who are respectful of human rights and sensitive toward the injustices Palestinians have faced since World War I and the acts of cruelty that are being committed against Palestinians in their homeland.

from Today’s Zaman, your gateway to Turkish daily news :: Columnists by GÖKHAN BACIK
Turkey has recently announced its new policy towards Israel and has set about implementing it on a global level. But Israel is no ordinary state, and Turkey must necessarily tread carefully on the highly sensitive balance of global politics.

The opium of the Israelis

from Hurriyet Dailynews by HDN
After my ?open letter to Israelis,? which ran on this page last Wednesday, I received many comments from Israel, most of which I appreciated. They really helped me get a better grasp of the current mood in the Jewish State.

from Hurriyet Dailynews by HDN
The Israeli attack on the Mavi Marmara aid ship bound for Gaza on May 31, 2010, has proven to be a turning point in Turkish-Israeli relations.

Right-wing Israelis and the Kurds

from Today’s Zaman, your gateway to Turkish daily news :: Columnists by İHSAN YILMAZ
Whenever we criticize Israel?s repressive and inhumane actions against innocent Palestinian civilians, a common response from the right-wing Israelis and Zionists is that Turks have been similarly oppressing Kurds and what would Turks do if Israel sent an aid flotilla to the Kurds in Turkey. This stance shows their sheer hypocrisy with regards to humanitarian causes and this attitude will not help the Israeli people, as it will not only prevent sincere self-reflection and self-criticism but also harm their credibility in the international arena.

from Today’s Zaman, your gateway to Turkish daily news :: Columnists by KLAUS JURGENS
Has Ankara overshot the diplomatic runway? Is Turkey jeopardizing its allies? political comfort zones? Does Prime Minister Recep Tayyip Erdoğan risk an all-out verbal confrontation with Israeli Prime Minister Benjamin Netanyahu? My take on things: no, perhaps, what if?

The meaning of the ?Arab Spring tour’

The primary goal of the tour Prime Minister Recep Tayyip Erdoğan is set to embark on next week in Egypt, Libya and Tunisia is to form close relations with the new leaders that the Arab Spring has brought to these countries. But one should really view this diplomatic move more with relation to the role Erdoğan’s government wants to play within the reshaping of the Middle East.

Dar Al-Hayat (UK) 9 September 2011, p. 9 Walid Choucair Turkey has not stopped taking surprise steps on the regional front. They have been unexpected moves for the country?s peers in the form of regional powers, such as Israel and Iran, and even the Arab political order around it. Turkey?s stances have constituted surprises for

Main opposition Republican People’s Party (CHP) leader Kemal Kılıçdaroğlu has been criticizing the government’s policy towards Israel, saying the pro-Israel UN report on the Gaza flotilla dealt a direct blow to the Turkish government, which has worked hard to undermine an Israeli blockade of Gaza.