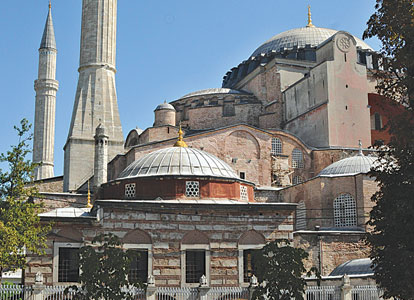 Some 9.4 million foreign tourists are expected to visit Istanbul this year, thus marking the city the third with the largest rise in the number of tourists. DAILY NEWS photo, Hasan ALTINIŞIK

by ISTANBUL- Hürriyet Daily News
Tourism revenues in 2011 will grow fastest in Istanbul among some 132 cities over the globe, surpassing even New York and Amsterdam in terms of number of visitors, according to research. Forecast for revenues stands at $10.2 billion

Istanbul: Where Europe and Asia collide
CNN
By George Webster for CNN This month, MainSail reports on the Extreme Series Grand Prix in Istanbul. Here we present a waterfront guide to this timeless, vibrant city. (CNN) — With its jumble of Byzantine cathedrals, Ottoman mosques and contemporary

Countdown starts for Istanbul Jazz Festival
Hurriyet Daily News
Featuring over 40 concerts and more than 300 local and foreign artists, the 18th Istanbul Jazz Festival will kick off Friday, continuing through until July 19. Building on its success last year, the second Tünel Feast will be run the first weekend of

Four of the best hotels in Istanbul
Telegraph.co.uk
From a former Ottoman palace to stylish boutique hotels, the four best places to stay in Istanbul, as selected by Francesca Syz. This quietly brilliant and intimate boutique hotel is the ideal option for those looking for something stylish,

Exploring Istanbul: The Journey Begins at the Taksim Square
Daily Bhaskar
People say places leave memories in your heart, but I left my heart in Istanbul. Turkey’s largest city which spans over two continents, Europe and Asia, is a perfect blend of cultures for centuries.The city is not only modern and vivacious but,

Poliparks expected to ease parking problems in İstanbul
Today’s Zaman
Parking and traffic problems in the megacity of İstanbul cause nightmares for drivers in, especially in busy districts such as Beyazıt Mercan and Söğütlüçeşme around the Kadıköy Marriage Office. In some of the city’s districts it is even hard to find

In Istanbul, Greek History on Display
New York Times (blog)
By SUSANNE FOWLER In a rare display of cross-cultural cooperation between countries with a history of enmity, a new exhibition in Istanbul features antiquities from Greece, including marble figurines, clay tankards, weapons, cooking utensils,

Istanbul ranked 4th in Europe by MasterCard
Istanbul was named as one of the world’s top performing tourist destinations in 2011, based on MasterCard’s new Worldwide Index of Global Destination Cities.