Markets hope the new government will take stronger measures, including fiscal tightening, to cool a runaway economy that expanded by 11 percent in the first quarter of 2011. Turkey’s current account deficit is seen in a danger zone. though Erdogan said

Turkey’s President Abdullah Gul (L) greets main opposition Republican People’s Party (CHP) leader Kemal Kilicdaroglu at the Presidential Palace of Cankaya in Ankara June 30, 2011. Turkish Prime Minister Tayyip Erdogan’s third term got off to a turbulent start on Tuesday when the main opposition party and minority Kurds boycotted parliament’s swearing-in to protest against bans on elected candidates. The boycott meant more than 30 percent of elected MPs refused to take their oath as parliament convened for the first time since the June 12 election in EU candidate Turkey, a country often cited as a model for democracy in the Muslim world. REUTERS/Mustafa Oztartan/Presidential Palace Press Office/Handout

from BBC News | Europe | World Edition
Opposition parties in Turkey boycott the swearing-in of the new parliament after nine MPs are barred from taking their seats.

from Hurriyet Dailynews by ANKARA – Hürriyet
PM Erdoğan has criticized opposition members who did not take their parliamentary oaths on Tuesday, telling his legislative group Thursday that the body would work with or without opposition.

from Hurriyet Dailynews by ISTANBUL – Hürriyet Daily News
Turkey’s newly elected Parliament convened Tuesday for the first time since the June 12 elections, with the independent deputies boycotting the body and the CHP refusing to take the oath.

Erdoğan: Couldn’t the BDP find anyone else?

from Hurriyet Dailynews by ISTANBUL – Hürriyet
The pro-Kurdish BDP was informed that choosing a contentious candidate for the June 12 elections was a wrong step but it refused to listen, the prime minister has said. 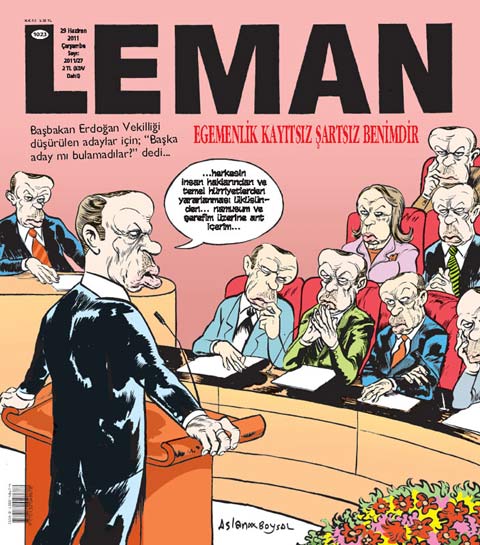 from Hurriyet Dailynews by ANKARA &#8211; Hürriyet Daily News
The main opposition leader sent a letter Friday to the international community, explaining his party?s reasons for not taking oath in Turkey?s Parliament on Tuesday.

Opposition within the CHP throws in the towel

from Hurriyet Dailynews by ANKARA- Hürriyet Daily News
The opposition within the Republican People?s Party pulls back from its demand to call for an emergency convention, a move welcomed by leader Kemal Kılıçdaroğlu. The dissidents say the decision has been made to support the party in its struggle, but rumor has it that they failed to collect enough signatures

from Hurriyet Dailynews by ANKARA – Anatolia News Agency
A rapporteur appointed by the Constitutional Court to look into a court decision that barred elected deputy Hatip Dicle from Parliament concluded his advisory report on Tuesday.

from World news: Turkey | guardian.co.uk
In all reports of the recent Turkish elections (Report, 13 June), why has there been so little coverage in the UK media about the significant success of the Kurds or of their continued repression by the Turkish authorities?
Because of a rigged electoral system, the pro-Kurdish Peace and Democracy party did not field candidates but stood as independents. Despite widespread “dirty tricks” by the authorities, including intimidation, threats, bribery and fraud, 36 Kurdish politicians were elected, nearly doubling the number of Kurdish representatives in parliament since the previous election.

by admin
Copyright show:
No
Before Turkey?s parliamentary elections in June, many Kurdish politicians saw the government?s constitutional reform initiative as a chance to advance their community?s decades-long struggle for broader cultural and political rights. Now, with six elected Kurdish candidates barred from taking their seats in parliament, Kurds are reconsidering the need for changes in Turkey?s constitution.

Turkey after the election: Business as usual | The Economist

Turkey: What Do the Kurds Think? | EurasiaNet.org

Why Are Parliamentarians in Jail?

by Jenny White
Click here for some commentary on the way the Turkish court system works, particularly with regard to the detained parliamentarians now causing a crisis as opposition parliamentarians refuse to take the vote of office as long as elected independents are incarcerated.  (see previous posts) Small excerpt: