Country of No: No Laziness or Adventurism

from Kamil Pasha by Jenny White
The Crime? Directing Turkish People to Laziness and Adventurism. The punishment: a $92,000 fine. In effect, cease publication of the humor magazine, Harakiri. 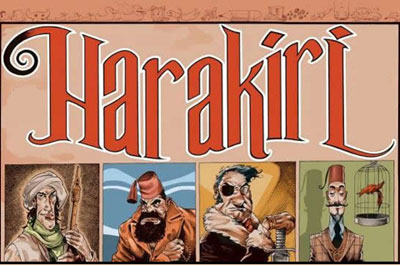 From Hurriyet (click here):
The humor magazine Harakiri has been forced to shut down after being slapped with a 150,000 Turkish Lira fine by the Children Protection Board for being a ?harmful influence on the morality of minors.?

The Short Life of the Harakiri Magazine

The Children Protection Board decided that some drawings in the satiric Harakiri magazine were harmful to children. The magazine was handed down a TL 150,000 fine that forced the owners to cease publication for good after the second issue.

And an outline of recent violations…

In its section on working conditions of journalists, the media report of the Turkish Economic and Social Studies Foundation revealed problems like low salaries, lack of unionization, male dominance and informal employment.

by By SEBNEM ARSU
Some 170 deputies refused to take their oaths of office in response to court rulings that barred eight of their colleagues, currently in jail on terrorism-related charges, from joining the assembly.

by HDN
Let?s forget for a moment all the bureaucratic-juristocratic chains of mistakes that barred Hatip Dicle?s deputyship.

The absurdity of Turkey’s oaths

by HDN
You need both authoritarianism and stupidity to believe that you can indoctrinate a whole nation by making them, and their representatives, recite words that they don?t believe

Why Turkey will not become Italy

by HDN
Attending an Italian gathering of the Council for the United States and Italy, I was struck by the extent to which Italy reminded me of Turkey before 2002.

Jailed deputies seek court permission to enter Parliament
Today’s Zaman
All nine suspects — six in the Kurdish Communities Union (KCK) trial as well as two in the Ergenekon case and a suspect in the Sledgehammer coup trial — have obtained their official deputyship status. Yet they need to enter Parliament and attend an

by STRASBOURG – Hürriyet Daily News
The pre-trial detention length is a serious obstacle to the democratization process in Turkey and it should be re-organized.

by HDN
The writers of the online Ekşi Sözlük have been warned that a ?Hate Speech Regulation Project? was initiated early this week.

The issue of freedom of expression is not new in Turkey; it is certainly one of the most contentious and long-standing issues in its history.

Tayyar, Balbay can work on press law, says chief negotiator
Hurriyet Daily News
Daily Cumhuriyet journalist and Ergenekon suspect Mustafa Balbay, who has been under arrest for three years on charges of membership in an alleged criminal organization known as Ergenekon, was elected as a deputy from the Republican People’s Party

Prosecutor asks court to reject release of newly elected MPs
Hurriyet Daily News
The prosecutor’s office has submitted a request for the release of two arrested Ergenekon suspects, who were elected as deputies from the Republican People’s Party, or CHP, to be rejected by the court. Istanbul prosecutors Mehmet Ali Pekgüzel and Nihat ?