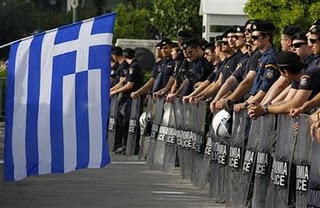 The #SpanishRevolution discussed at IN3, Barcelona

Quick notes in preparation for a discussion that will use an op-ed by Manuel Castells, one blog post by Pedro Silverio Moreno, and two other short pieces, as a springboard for discussion on the social movements related to 15-M and the acampadas in Spain. Special thanks once again to Alec Gershberg for getting this session under way.

Seeing the world through British eyes

Worldmapper: We mapped the amount of factual programs on British television for a media report by the IBT: http://wrld.at/uktv

from BBC News | Europe | World Edition
Greek politics is in flux, with Prime Minster George Papandreou announcing he will form a new government to enact austerity measures. A protestor describes the mood on Athens’ streets.

At last, Germany is making the right noises about the eurozone | Henning Meyer

by Henning Meyer
Taking a lead doesn’t come easily to Merkel. But perhaps she now sees Germany needs to light the way to a sustainable future
One cannot help but feel that the Greek tragedy is nearing some sort of endgame. The streets of Athens are burning as people try to resist yet another round of austerity medicine repeatedly prescribed by the EU/IMF and forced down their throats by the Greek government. Even though there is ample evidence that the current medication simply does not work ? instead triggering huge social and economic side effects ? policymakers at the IMF, the EU and the ECB are unwilling to rethink their diagnosis and cure.

from euro|topics
Dissatisfaction is mounting over Germany’s blockade of the Greek bailout. French President Nicolas Sarkozy will discuss the subject today with Chancellor Angela Merkel in Berlin, while Eurozone head Jean-Claude Juncker is urging Germany to act quickly. The press fails to understand Germany’s attitude and sees the costs spiralling as a result of the delay.

Staring into the abyss

The situation in Greece has shifted in the last few days (admittedly a massive understatement), previously the disagreement between the ECB and Germany over a second Greek bailout was the main threat, but with the IMF now agreeing to release the next tranche of the original Greek bailout funds, the main engine pushing Greece towards an imminent default is now the domestic political chaos.

Europe on the streets: Europrotests in the focus of research

from Ideas on Europe by Ronny Patz
Leigh Phillips of the EUobserver yesterday published a long piece on how democracy is endangered by the current technocratic reactions to the crisis. While it is important to notice and to warn when democracy is in danger, Leigh?s observations are not that new.

The European Parliament is being pro-EU, but not pro-EU democracy

by Grahnlaw
Finland emerged from the 17 April 2011 general election split between those who want to face up to the challenges of globalisation, the increasing need for internationalism and the requirements to show European solidarity and those who want an escape route to a bygone (?golden?) era of autarky

Why the ?Indignados? Matter: Spain, Revolution and the European Ideal

from Ideas on Europe
By Pablo Calderon Martinez
Adjectives such as ?paradigmatic?, ?inspiring?, ?impressive? and ?remarkable? have been widely used in academic circles to describe Spanish democracy and the process that successfully established it; referring to a ?Spanish model? of democratisation was common practice when analysing what Huntington referred to as the Third Wave of transitions to democracy. The Spanish case has been widely used as a benchmark for most democratic transitions ever since; Spain is considered to be the greatest success of the Southern European transitions in the 1970s, and the main factor that unleashed a democratic snowballing effect in Latin America that lasted more than two decades and that saw the end of military/authoritarian regimes in Argentina, Brazil, Uruguay, Chile, Mexico and many other countries. Spain was also hailed as an example for post-communist countries trying to become democratic whilst securing accession to the European Union, and has been treated as a testing ground for any explanatory paradigm of democratisation (from modernisation theory to culturalist explanations). In fewer words, although not without its problems and shortcomings, Spanish democracy has always been considered a resounding success.

from open Democracy News Analysis – by Geoff Andrews
Italy?s opposition has wounded Silvio Berlusconi. But it is still far from removing the prime minister – and even further from healing Italian democracy. Here, the case of Dominique Strauss-Kahn offers important lessons, says Geoff Andrews.
Milan?s Piazza Duomo, the vast cathedral square in the centre of the great north Italian city, was packed on 30 May 2011 with jubilant supporters of the opposition to Italy?s longest-serving post-war prime minister. Silvio Berlusconi. They were celebrating what many see as a turning-point: the first electoral victory over the ruling party in Milan during Berlusconi’s time in power, as the the opposition challenger and local lawyer Giuliano Pisapia ousted incumbent mayor Letizia Moratti.,

from euro|topics
Athens will only receive the next instalment of the bailout package provided its parliament passes further austerity measures. That was the agreement reached by the Eurozone finance ministers on Monday in Luxembourg after weeks of debate. This is Athens’ last chance, the press writes, and calls for new structures that allow Europe to take decisions faster.

The Greek Crisis: What next?

by Open Europe blog team
With the Greek and eurozone debt crisis showing no sign of easing, let’s try to assess the state of affairs – and what could happen over the next few weeks:

The effects of a Greek debt restructuring

from euro|topics
Early on Monday morning the finance ministers of the Euro Group suspended their negotiations on a second bailout package for Greece. All that is certain for now is that contrary to German demands private investors will only participate on a voluntary basis, while the parliament in Athens must pass further austerity measures. This will make things difficult for Prime Minister Papandreou, writes the press, and now considers it better to let the country go bankrupt.

The Gloom of having no Good Options

from The European Citizen by Eurocentric
The Greek government has survived the vote of confidence, and now its next test is passing more austerity measures. Austerity has little – if any – support among the Greek electorate simply because it hasn’t delivered the goods yet. It seems obvious that Greece will default at some point, but would it be better to do it sooner rather than later?

from euro|topics
The Greek parliament passed a vote of confidence for Giorgos Papandreou’s government by a slim majority late on Tuesday night. In so doing it has backed the prime minister’s austerity programme demanded by the euro countries. This is only a small victory for the struggling government, writes the press, because the next financial aid is still not a done deal.

from Brussels Blog by Joshua Chaffin
Corien Wortmann-Kool, a Dutch MEP, trekked to Luxembourg for breakfast this morning with finance ministers from her political group, the European People?s Party. The hope was that meeting over coffee and croissants might help to narrow differences between the European ?
Continue reading: “Will Greece put Europe?s six pack on ice?”

The euro crisis: What next?

from Nosemonkey’s EUtopia by nosemonkey
Random thoughts ? because, let?s face it, no one knows what?s going to happen and most economic predictions over the last few years have proven utterly mistaken.
To note: I?ve always been euro-sceptic.