Amnesty International has gathered credible evidence that detainees in Turkey are being subjected to beatings and torture, including rape, in official and unofficial detention centres in the country. The organization is calling for independent

The internet saved Turkey’s president from a coup. Now he’s doubling down on censorship.
cjr.org

Turkey’s president would not be in power today had he succeeded more fully in his efforts to curtail critical media and control online speech. That fact gave a ray of hope to some of his critics that President Recep Tayyip Erdoğan might…

The Gulen Movement Isn’t a Cult — It’s One of the Most Encouraging Faces of Islam Today
huffingtonpost.com – Jul 22

The Guardian view on Turkey: beware an elected dictatorship | Editorial

World news: Turkey | guardian.co.uk by Editorial
A brutal and indiscriminate reaction to the failed coup would threaten the values that defeated it

Funerals After Coup Attempt in Turkey

NYT > Turkey by By REUTERS At a mosque in Istanbul, President Recep Tayyip Erdogan of Turkey attended a funeral for some of those killed during the failed coup attempt this weekend.

Fethullah Gulen: Turkey coup ‘could have been staged’ The reclusive cleric Fethullah Gulen, blamed by President Erdogan for the failed coup in Turkey, suggests that the government could have staged the uprising.

NYT > Turkey by By JAMES KANTER Even before the weekend’s events, President Recep Tayyip Erdogan had represented a quandary for E.U. foreign ministers, who are meeting in Brussels
Erdogan’s People
NYT > Turkey by By SUZY HANSEN Faced with an influx of Syrian refugees, a conservative neighborhood in Istanbul struggles with the question of what it means to be a Turk.
VIDEO: Man survives after two tanks roll over him during failed coup attempt

A man survived after two tanks rolled over him during the July 15 failed coup attempt in the Üsküdar district of Istanbul. Video footage of the incident recorded by a nearby security camera showed Sabri Ünal, 34, attempting to stop the tanks by lying in front of them
Not A Video Game, It’s Just Turks Repelling A Coup
The Istanbulian by Emre Kızılkaya 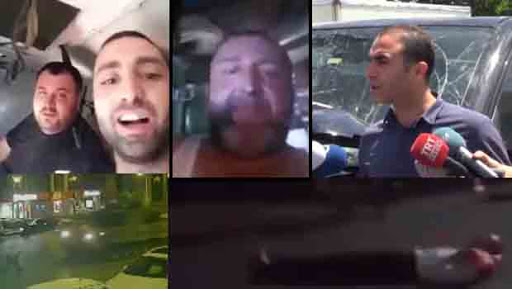 You have probably read enough about the failed coup attempt in Turkey.
‘Graveyard for traitors’ to be built in Istanbul for coup plotters: Mayor

Istanbul Metropolitan Municipality Mayor Kadir Topbaş has said the city ordered a space which will serve as a graveyard for the plotters of the July 15 failed coup attempt as no cemetery would accept their corpses, calling the plot “the graveyard for traitors”
Turkish police block distribution of satire magazine covering Gülen
,

Turkish police blocked yesterday the distribution of a satire magazine’s special edition published after the July 15 failed coup attempt, in a move its editors believed was aimed at making it pay a price for its previous cartoons mocking and criticizing the organization suspected of planning the overthrow bid
What it was like covering Turkey’s failed coup

Beşiktaş’s German striker Mario Gomez has announced that he will leave Turkey because of the “political situation,” saying that it was a “difficult decision.”
S&P downgrades Turkey’s sovereign credit rating after failed coup attempt

The coup against Turkish President Recep Tayyip Erdogan failed because it was a coup. The previous military takeover, of Sept. 12, 1980, was immediately and totally successful because it was executed by the armed forces as whole, under the chain of command headed by the Chief of the General Staff Gen. Kenan Evren. The technical term for that sort of takeover is pronunciamento, Spanish for declaration. With all the armed forces acting as one, it is enough to declare that power has been seized to actually have it. Turkey’s Bitter Divisions Will Widen After The Failed Coup

Late Friday night, a faction within the Turkish military launched a violent and ultimately ill-fated coup attempt which will make democracy in Turkey ever more elusive.

Debate: How should the EU and Nato handle Turkey?

euro|topics
US Secretary of State John Kerry has called on Turkey to observe the principles of democracy as a Nato member state and has not ruled out the possibility of the country being ousted from the Alliance in the event of non-compliance. The EU has also threatened to suspend Turkey’s membership negotiations if it reintroduces the death penalty. Commentators argue that the West is in no position to issue threats.

Political scientist: ‘Turkey is a tyranny of the masses’ Even before the attempted coup, Turkey was no longer a democracy, according to political scientist Dr Roy Karadag. He told EurActiv’s partner WirtschaftsWoche what Erdoğan has planned for Turkey next and why the EU refugee deal hangs in the balance. The Turkey coup looks like the most incompetent undertaking imaginable Whatever happened on Friday 15 July, Turkish President Recep Tayyip Erdoğan has emerged stronger than ever and can now arrest anyone he wants on charges of treason, writes George Friedman.

Politicians from the US to Egypt have fallen into chorus about holding up democracy against military usurpation following Turkey’s failed coup. The reality is that democracy’s ideals and procedures are being hollowed out. How smartphones and social media played a pivotal role in Turkey’s failed coup, and the plotters failed to realise the crucial role of modern communications.

Mogherini on Turkey: ‘No country can become an EU member state if it introduces the death penalty’ EU High Representative for Foreign Affairs Federica Mogherini stressed on Monday (18 July) that “no country can become an EU member state if it introduces the death penalty”, after Turkish President Recep Tayyip Erdoğan said on Sunday that the country should reintroduce capital punishment after last week’s attempted coup.
Turkey May Review Relations With US if Washington Fails to Extradite Gulen
Sputnik International
MOSCOW (Sputnik) – Late on Friday, Turkish authorities said that an attempted coup took place in the country.Turkish President Recep Tayyip Erdogan and other officials have blamed Gulen staying in self-imposed exile in the United States and his …
Deputy mayor of Istanbul shot in the head at his officeNewstalk 106-108 fm
EU, Nato and US send warnings to Turkey as its post-coup crackdown continuesThe National
Erdogan Is Blaming the Coup on a Shadowy Turkish Cleric Who …Foreign Policy (blog)
The Weekly Standard (blog) –Stuff.co.nz

Turkey sends four dossiers to US over extradition of Gülen

The president will take this chance to weaken the media, judiciary and military. He has one-man rule in his sights

How heavily the bloody coup attempt in Turkey has traumatised the country may be beyond anyone’s imagination. Needless to say, the perpetrators, in what seemed like an ill-planned, fast-forward action, have delivered a deadly stab to the country’s already wounded democratic system, which had been sending an SOS out to the world for some time. Turkish officials say that nearly 8,000 police officers have been suspended on suspicion of having links to the weekend’s failed coup.

Debate: Does democracy still have a chance in Turkey?

euro|topics
Following the failed coup in Turkey the government has had 6,000 people arrested and removed more than 2,700 judges and public prosecutors from their posts. The fact that a majority of the population resisted the coup was by no means a victory for democracy, some commentators believe. Others are relieved that a military dictatorship has been prevented and place their hopes in the opposition.

Debate: Who was behind the attempted coup?

euro|topics
Turkey’s President Erdoğan has blamed his former ally Fethullah Gülen, a Muslim cleric currently living in exile in the US, of orchestrating the attempted coup. Gülen has roundly rejected the allegations. While some commentators say Erdoğan himself was behind the coup others pin the blame squarely on Gülen and his followers.

Predictions about the consequences of Turkey’s failed coup focus on how it fulfils Erdoğan’s desire for an omnipotent presidency. But the danger that awaits is much greater than that.

Turkey’s president, Recep Tayyip Erdoğan, weeps at the funeral for his top campaign manager and teenage son, who died during the failed coup attempt. Thousands of mourners attended the funeral ceremony in Istanbul on Sunday, where Erdogan burst into tears as he addressed the crowd. He promised to carry the country into the future in unity and soildarity. Photograph: Burak Kara/Getty Images

President Erdoğan seems intent on purging his enemies. The EU must use all its diplomatic powers to steer him away from reinstating capital punishmentThe military coup that was launched, and that failed, between Friday night and Saturday morning, showed the two faces of today’s Turkey in sharp relief. On the one hand, there was the old tendency of the military to take responsibility for the nation, with officers casting themselves as the guardians of law and order and the secular state. On the other, there was a new sense of pride in even flawed democracy that brought people, young and old, religious and not, into the streets to oppose an illegal seizure of power. The people won; so far, so good.

It has been reported that a custody order has been issued for President Erdoğan’s top Military Aid Colonel Ali Yazıcı and Colonel Tevfik Gök; Private Secretary of Minister of Defence Fikri Işık has been taken into custody.

What we learned from the coup attempt in Turkey

Turkey: what happens next

This from Dani Rodrik, who is Professor of International Political Economy at Harvard’s Kennedy School.

There is less uncertainty about what is likely to happen next. The coup attempt will add potency to Erdoğan’s venom and fuel a wider witch-hunt against the Gülen movement. Thousands will be sacked from their positions in the military and elsewhere, detained, and prosecuted with little regard for the rule of law or the presumption of innocence. There are already alarming calls to bring back the death penalty for putschists, which recent experience shows is a very broad category for Erdoğan. Some of the mob violence against captured soldiers portends a Jacobinism that would jeopardize all remaining due-process protections in Turkey.

Why the defeated coup in Turkey could make democracy weaker there

washingtonpost.com – Op-Ed Columns by By Ezgi Basaran
The crackdown after the foiled attempt won’t be pretty.

Coup attempt could have long-term repercussions for Turkey President Recep Tayyip Erdoğan said that Friday’s failed coup (15 July) was a “gift from God”, giving him the chance to re-shape the country, and purge the country’s elite from enemies, who accuse him of creeping Islamisation in the traditionally secular state.

European foreign ministers will urge Turkish President Tayyip Erdoğan today (18 July) to respect the law and human rights in dealing with defeated coup plotters, but have limited leverage over their strategic neighbour Footage shows the moment a soldier surrenders and is pulled from his tank by a police officer, after being attacked by a crowd.

Coup attempt highlights widening faultlines in Turkish alliance with US

President Recep Tayyip Erdoğan has vowed that the government will discuss with the opposition reintroducing the death penalty in Turkey, following the failed military coup attempt of July 15

In standing up to their military the Turkish people have at last broken with the past and tamed the army – but at what price?At about 11pm on Friday, I was passionately debating Pokémon Go at a dinner party in Istanbul when someone announced that a military coup was taking place. “Really – actual jets? Tanks at the airport – seriously?” Everyone was incredulous, scanning their phones, until someone spotted a helicopter from the balcony. Reality hit home, and we hastily took our leave. In corner shops middle-class locals were stocking up on water and – bizarrely – pet food.

, NYT > Turkey by By GARDINER HARRIS, The United States top diplomat on Sunday denounced claims made by Turkey’s labor minister of American involvement in Friday’s coup.