Made a list to keep track of #TurkeyPurge.#Turkey #Erdogan pic.twitter.com/1IEBlrFOX0

Council of Higher Education Demands Resignation of Every Dean The Council of Higher Education has demanded resignation of 1,577 deans of whom 1,176 from public universities, 401 from foundation universities.

Ministry of National Education has declared that 15,200 public officials have been suspended on charges of coup attempt and that investigation has been launched into those.

At least 59,644: # of people detained, removed from their jobs or stripped of professional licenses so far #TurkeyCoup #TurkeyPurge

The Turkish president, Recep Tayyip Erdoğan, has refused to rule out executing the ringleaders of last week’s failed coup, despite repeated warnings from western leaders who said the use of the death penalty would end Turkish hopes of joining the European Union. RTÜK has announced it has revoked broadcasting right and license of all radio and TV organs which it claims to be “in support and relation with Gülen movement”. 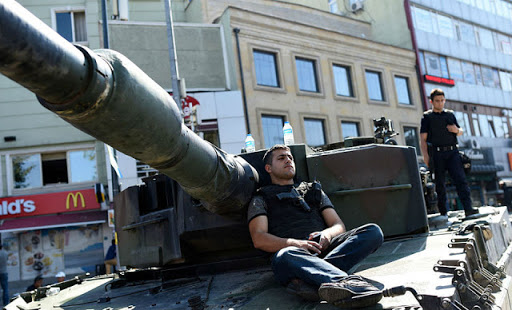 Russian Journalist Trushinin Has Been Taken into Custody, Deported Russian journalist Valentin Trushinin who came to Turkey to follow the coup attempt has been taken into custody in Atatürk Airport and then deported.

Religious Affairs: No Religious Service for Bodies of Coup Plotters The Presidency of Religious Affairs has declared that funeral won’t be held for those killed in coup attempt.

We asked people living in Turkey how they have been affected by the military coup attempt. Here they share their experiences

Bahçeli: If AKP Is Ready For Death Penalty, Count Us in Too The MHP Leader Bahçeli has supported AKP regarding bringing back death penalty. ”We will do what is needed with inner peace. We are ready to discuss death penalty regarding coup and terrorist threat.”
Turkish Markets Set for More Losses As Moody’s Considers Downgrade to Junk, WikiLeaks Promises Erdogan Email …
ETF Daily News
Following Monday’s huge drop, TUR shares were down $0.12 (-0.31%) in premarket trading Tuesday to $38.88. Even with the huge drop, TUR has still gained more than 7% year-to-date. Given the huge amount of uncertainty within Turkey right now, don’t be … The Amnesty has stated that human rights in Turkey are in peril following the coup attempt which resulted in the deaths of at least 208 people and almost 8,000 arrests.

U.N. High Commissioner for Human Rights Zeid Ra’ad Al Hussein on July 19 called on Turkish authorities to respond to the attempted coup by reinforcing the protection of human rights and by strengthening democratic institutions and checks and balances

President Recep Tayyip Erdoğan has reiterated that the death penalty was not off the table for those suspected of plotting a coup against the Turkish government, in an interview with CNN broadcast on July 18

Two helicopters and 25 special forces personnel, who were heading for a raid targeting President Erdoğan in Marmaris, have been missing since the failed July 15 coup attempt, Abdulkadir Selvi has stated Former Governor of İstanbul Hüseyin Avni Mutlu has been suspended.

Since Turkey’s failed military coup on Friday, more than 6,000 people in the civil service, security forces and military have been arrested. Writers and journalists fear that Turkey’s authoritarian president, Recep Tayyip Erdoğan, will use the failed putsch as grounds to dramatically escalate his continuing purge of opponents, particularly in the media. Phoebe Greenwood goes to Istanbul to meet the journalists risking life sentences to report and publish stories critical of the Erdoğan government

Hearing explosions during the coup attempt was scary enough, but so are the abuses that are being carried out by Erdoğan’s supporters in the name of ‘democracy’I was at a barbecue in the garden of the British embassy bar in Ankara on Friday night when F16s started roaring overhead. We soon heard that the Bosphorus Bridge in Istanbul had been blocked off, too, and there was talk from various off-duty officials of an attempt at a military coup. It seemed so unlikely.

EU, Nato and US send warnings to Turkey as its post-coup crackdown continues
The National
On Monday night, WikiLeaks announced it would soon release more than 100,000 emails and 500,000 leaked documents related to Turkey’s political power structure. “AKP supporters should pay attention,” the organisation tweeted tauntingly, referring to The Interior Ministry fired nearly 9,000 police officers on Monday, officials said, coming after the arrests of 6,000 military personnel and suspensions of nearly 3,000 judges. The Council of Higher Education Chairperson has invited rectors of all universities to the meeting and said “The steps that we take to clean our academic community from this formation will be discussed.”

Turkey’s Prime Minister Binali Yıldırım has suspended the annual leave of more than three million civil servants nationwide until further notice, according to a government order published on July 18

The events of this weekend were deeply disturbing for all of us.  We join our Turkish friends in mourning the tragic loss of life caused by attempts to violently overthrow Turkey’s democratically-elected government.  Coups have no place in a modern democratic society. I applaud the Turkish nation’s resolve against this violent intervention and their support for democratic institutions.

The president will take this chance to weaken the media, judiciary and military. He has one-man rule in his sights

Footage shows the moment of attack on Turkish intel HQ

NYT > Turkey by By ZEYNEP TUFEKCI Who would have guessed that free online communication would come to Recep Tayyip Erdogan’s rescue?

In Istanbul, Optimism Fades to a Familiar Melancholy The coup attempt showed Istanbul to be perhaps Turkey’s most important city, but it is enveloped by a deep unease about terrorism, refugees and gentrification.

Erdoğan: ‘We Will Build Military Barracks in Gezi Whether They Like It or Not’ Here is the list of fake news spreading in social media after the attempt of military coup on 15th July, 2016: Attention: This list indicates some graphic and disturbing visuals Claim: President of Azerbaijan, Ilham Aliyev stated that in case of a

Turkey’s artists face growing government pressure
Al-Monitor
Hence, the Bilgi students’ banner juxtaposing the ruling party’s attitudes on arts and rape. The war on sculptures has, however, continued. A piece by a Vietnamese artist on display outside a cultural center in a CHP-run district in Bursa was