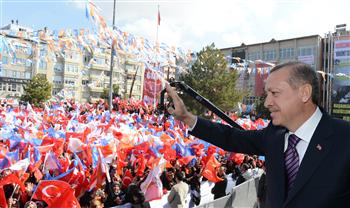 Prime Minister Recep Tayyip Erdoğan has geared up his rhetoric against the movement of U.S. based Islamic scholar Fethullah Gülen, calling for a boycott of the movement?s schools

Statements like this have led the recently-appointed European Union Minister and chief negotiator Mevlut Cavusoglu to retort that the “US is well-known for its Internet restrictions, especially regarding Wikileaks,” appearing on the Turkish news

Erdoğan gets ready for anti-Gülen campaign

In its bimonthly meeting on Feb. 26, the National Security Board (MGK) decided to focus on the activities of Gülenists as a threat to Turkey?s security

The massive Ergenekon and Balyoz trials, which helped send a large number of high-profile Turks (numerous generals among them) to jail on charges of planning a coup, were hailed by many as an important step in finally confronting the troubling history

Erdogan is source of Turkey?s problems

A second audio recording, presented as the voice of Turkish Prime Minister Tayyip Erdogan asking his son not to accept an amount of money on offer in a business deal but to hold out for more, was published on YouTube by an anonymous poster using a pseudonym on Wednesday (26 February).

Erdoğan said a similar post on the video-sharing site on Monday, allegedly of him telling his son Bilal to dispose of large sums of cash as a graft investigation erupted, was faked by his political enemies.

Q&A: Erdogan and the illicit recordings

The scandal of illicit recordings said to be of PM Erdogan

The Turkish president signs a law giving the government more control over the country’s judiciary weeks after a bribery inquiry rocked the government.

The AKP government has been fervently pushing through legislation ahead of crucial local elections in March 2014 with the air of a heavily wounded giant whose actions are not the result of intelligent calculation or rationality so much as an instinct for survival.

Turkey?s top security board met to discuss the alleged ‘parallel organization’ within the state and its activities

Gov’t officials say a phone call recording allegedly taking place between the PM and his son about how to is ‘montaged,’ while the opposition party defends the opposite view

Turks Are Glued to a Sensational Drama, This One Political

Although the Turkish period drama ?The Magnificent Century? has become an obsession in the country, the show gripping many Turks is their nation?s own political crisis.