Internet Freedom Day: This Year We Go to War for Net Neutrality

This time of year is always the worst of times and best of times for internet freedom. And on this second annual Internet Freedom Day — the anniversary of the successful SOPA/PIPA Blackout protest — we need to keep fighting for network neutrality, especially since it turns out that the real problem isn’t the court’s decision … but the FCC‘s response to it. Here’s the insider story.

Why Sundance Is Going Ga-Ga for Internet Addiction

Suddenly the internet is a hot topic at the Sundance Film Festival. Could it be because our online narratives just as important as our offline ones? 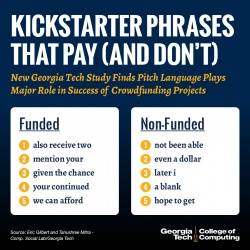 In ?The Language that Gets People to Give: Phrases that Predict Success on Kickstarter”(PDF), a paper for the 17th ACM Conference on Computer Supported Cooperative Work and Social Computing, Georgia Tech researchers from the School of Interactive Technology present the results of their statistical analysis of every single Kickstarter since June 2, 2012. The study attempted to determine which words and phrases correlated with success or failure in a Kickstarter campaign, after controlling for funding goals, video, social media connections, categories and pledge levels.

The Rise of Android: From Obscurity to the Top

Eight years ago, hardly any one was aware of the operating system called Android. Today, more than half public on the globe is using Android in their smartphones or tablets. Android, the smartphone operating system has traveled a beautiful journey from no where to the top, in less than eight years.

Tim Wu is the law professor and activist who coined the term “net neutrality” — the principle that ISPs should get you the data you request, as efficiently as they know how, without deliberately slowing down some sites unless they’ve paid bribes for “preferred carriage.” The FCC had made a halfhearted and legally doomed rule to protect American net neutrality, refusing to use its full regulatory power for fear of offending the powerful telcoms corporations it is meant to regulate.