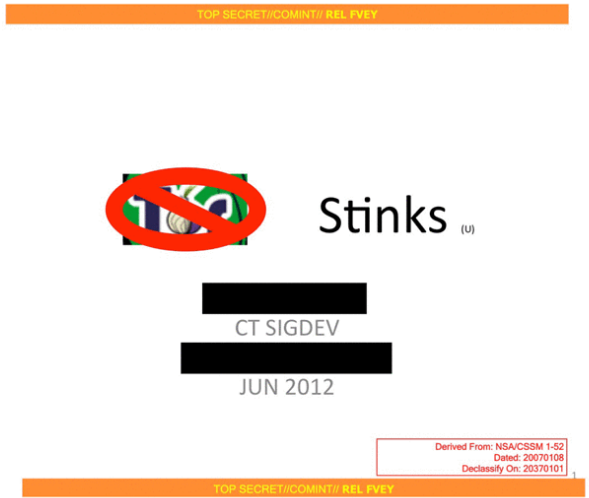 Despite the fact that online anonymity tool Tor was developed with US government funds, the NSA really does not like Tor.

Android vs malware: how to run a secure, open ecosystem

A presentation by Android Security chief Adrian Ludwig at Berlin’s Virus Bulletin conference lays out a fascinating picture of the security dynamic in the open Android ecosystem, through which Android users are able to install apps from the official, Google-operated Play Store, as well as from anywhere else they fancy.

Silk Road prosecution: how does the US criminal justice system actually work?

Popehat‘s Ken White (a former federal prosecutor) uses the arrest of alleged Silk Road founder Ross “Dread Pirate Roberts” Ulbricht to explain how the criminal justice system works, including the difference between a grand jury indictment and a criminal charge, and how to understand sentencing guidelines and “maximum possible sentences.” It’s a great way to use current events to deepen your understanding of important, complicated systems.

The FBI seized over $3.3 million in digital currency after busting up the online drug marker known as The Silk Road, and on Friday morning, someone spotted what is likely the online address where the feds are keeping all that money. The seized funds are in the form of bitcoins, the world’s most popular digital currency, and bitcoin addresses are public things. You can’t take the money, but you can see it.

Copyright Monopoly ? Johnny Olsson:?I?ve followed and participated in the copyright debate for years, and I?ve come to realize there are certain patterns that repeat themselves. You can roughly say there are three lines of defense: One that appeals to emotions, one that appeals to pragmatism, and one that appeals to a sense of responsibility. I?m going to take this opportunity and try to break them down.

The 29-year-old man accused of masterminding the notorious Silk Road drug forum appeared in court minutes ago for a planned bail hearing, but his lawyer asked for a continuance until next week to give him more time to prepare.

The Silk Road Online Drug Marketplace by the Numbers