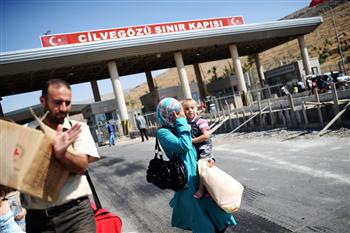 The UN’s refugee agency says two million Syrians are now refugees, as the US and France push for military action over chemical weapons claims.
Syrian child refugees, alone and exploited
Despite threats of violence, child refugees in Lebanon and Jordan often have to fend for themselves.
Syrians uneasy about western intervention
Some Damascus residents who blame the Assad regime for chemical attacks still aren’t keen on western involvement.

France?s Plan of Attack in Syria

?Punishment? against the Damascus government, as French President François Hollande put it, would consist only of aerial strikes on military units that have used chemical weapons, according to a source in the French Cabinet. Chemical ammunition warehouses would be spared in order to avoid uncontrollable explosions. The militaries of potential coalition forces believe they know exactly where these warehouses are.

What Arlington could tell Obama before a Syria attack

As President Obama weighs a strike on Syria, he will meet with military advisers, consult with allies and seek congressional approval.

Why attack Syria now is the question that needs to be answered?

The Syrian civil war has been ongoing for over two years, more than one hundred thousand Syrian have lost their lives, and over two million have become refugees. We do not know the actual numbers as many, if they have the means, have fled to friends and family in the surrounding nations and further afield.

Commenting on Conservative Home‘s special jury on the events in Syria Open Europe’s Christopher Howarth argues that Anglo-French co-operation on defence and foreign policy has taken a knock from the UK’s decision to pull out of military action in Syria:

David Cameron?s Syrian fiasco will reverberate through many aspects of politics. But how will it affect the UK?s international standing?

Syria in the era of ?à la carte? alliances

Even after the reported chemical attack on Aug. 21, the world is as divided as ever on Syria
Political conflicts steer Turkey?s defense business relationships
Divergences and convergences on domestic and foreign politics have recently become a game-changer in bringing fortunes and misfortunes to Turkish defense companies
Strange logic from Islamists on Syria
Prime Minister Recep Tayyip Erdoğan and Foreign Minister Ahmet Davutoğlu have made it no secret

Explore the strength, bases and weapons of the United States’ and Syria’s armed forces.

America must stick to a course on Syria

Washington needs to quickly formulate a strategy that it is prepared to implement and live with, whatever the consequences, writes Richard Haass

Thinking about the Somethings to be done about Syria

With breathtaking paternalism, the Obama Administration has decided ?something must be done? in Syria.  The ?something? it has in mind is the dropping of dozens of Raytheon?s BGM-109 bombs (aka the Tomahawk cruise missile) throughout Syria, particularly around its capital, Damascus.

The Sunday Mail claims that a British company was given an export license to sell chemicals to Syria that could be used to make chemical weapons. The government says the licenses were revoked, the chemicals never made it to Syria, and that they could not be used for that purpose in any case. [BBC]