The Egyptian interim president?s spokesman has slammed Turkey?s stance over the military takeover, adding that Cairo?s patience was ‘running out’

Turkish President Abdullah Gül has conceded that Turkey and its closest ally, the United States

Erdogan Plays The Victim Again, This Time in Egypt 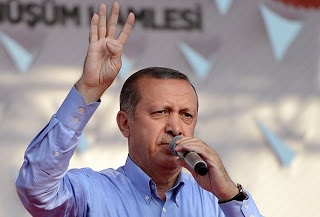 Say no to a feckless Syria strike

The Libyan war gave us the doctrine of ?leading from behind.? Now, in Syria, we are about to see the birth of a new Obama Doctrine: military action ?just muscular enough not to get mocked.?

As Washington weighs a military strike against Syrian leader Bashar al-Assad, the human fallout of two and a half years of conflict that has sent millions into flight is no longer contained to the Middle East. Hundreds of refugees are trying to get into Europe from the Western Balkans.

“We have no other solution,” said 25-year-old Syrian Mohammed Bakr, a clean-cut student of electrical engineering who has fled the besieged city of Aleppo after his home was struck by a rocket fired in an unrelenting civil war. “We have nowhere else to go,” he said to border patrols on a hilltop between Serbia and Macedonia.

Red lines and dangerous incoherence: Syria and the international community

While the region slips further into instability, the rejection of military action over Syria by the US Congress would be a huge stepping stone to undoing the US and western way of war since 9/11.

Syria: return to the Middle Ages

If the US decides to unilaterally attack Syria, Iranian Foreign Minister Javad Zarif?s recent observations on the subject will be fulfilled: “If any country attacks another when it wants, that is like the Middle Ages.”

Hezbollah mobilizes ahead of US strike

Lebanon?s Shiite Hezbollah group, a close ally of the Syrian regime, is redeploying its forces ahead of possible U.S. strikes on Damascus

NATO chief Anders Fogh Rasmussen said on Monday he had seen evidence about an Aug. 21 attack in Syria

In a move to fend off growing demands for a parliamentary vote, Prime Minister Jean-Marc Ayrault briefs party leaders ahead of a debate

Smuggling Syrian refugees out of Egypt