Best of Ballmer: The products and moments that marked the tenure of Microsoft?s CEO

Microsoft CEO Steve Ballmer announced today that he will be stepping down from his position within the next 12 months. The change was somewhat unexpected and poses questions not only about his successor, but how the company should change and refocusmoving forward. 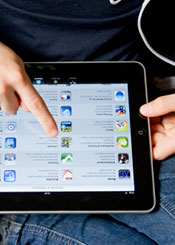 As teens gain access to mobile devices, they have embraced app downloading. But many teen apps users have taken steps to uninstall or avoid apps over concern about their privacy. Location information is considered especially sensitive to teen girls, as a majority of them have disabled location tracking features on cell phones and in apps because they are worried about others? access to that information.

Many teens ages 12-17 report that they usually figure out how to manage content sharing and privacy settings on their own. Focus group interviews with teens suggest that for their day-to-day privacy management, teens are guided through their choices in the app or platform when they sign up, or find answers through their own searching and use of their preferred platform.

At the same time, though, a nationally representative survey of teen internet users shows that, at some point, 70% of them have sought advice from someone else about how to manage their privacy online. When they do seek outside help, teens most often turn to friends, parents or other close family members.

When we released our ?Teens, Social Media and Privacy? report in May, one thread of news coverage focused on teens? ?waning enthusiasm? for Facebook. This theme surfaced during our focus group discussions with teens and stood in contrast to the excitement that was associated with newer platforms like Instagram and Twitter. We were not the first to suggest that teens were starting to diversify their social media portfolio, and as such, our report became part of a larger meme that swiftly declared Facebook?s imminent demise.

But sampling other items at the social media buffet is not the same as swearing off salad forever. As recent coverage has noted, our national survey data did not indicate a decrease in the total number of Facebook-using teens, even though the focus group findings suggest that teens? relationship with Facebook is complicated and may be evolving.

Has The FBI Dismantled Anonymous?

A Long List of What We Know Thanks to Private Manning

Too often (that is, most of the time), the value and import of the Manning/WikiLeaks disclosures are ignored or dismissed, just as Snowden’s NSA scoops are often derided as “nothing new.” So for those who either suffer from memory loss or ignorance on

Truthdig Bazaar · Time of Useful Consciousness. By Lawrence Ferlinghetti $22.95. The Naive and the Sentimental Novelist.