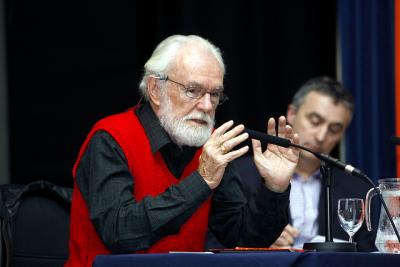 Preoccupying: an interview with David Harvey

David Harvey highlights the importance of challenging the state and addresses the everchanging ideal of the city and the social groups that sustain and contest it.

A series of public events in Wroc?aw, Poland?s European Capital of Culture in 2016, have been disrupted by radicals. Those responsible are not only supported by Law and Justice. They have also received strong material support from the present government of Platforma Obywatelska [Civil Platform].

(It took me a while to figure out how to post here since Savage Minds is now in a permanent state of exception. We are all Agambenians now, apparently.)

Two weeks ago the University of California system-wide Faculty Senate announced that they have passed an open access policy for all 10 campuses. The policy covers 8000 tenure-track faculty, and as many as 40,000 papers annually, making up 2-3% of the worldwide scholarly journal content. More details (and some videos of me looking really tired) are here.

The dignity of dissent: E.P. Thompson and One Nation Labour

E.P. Thompson was an advocator of freedom of speech and maintaining every citizen’s right to dissent. In light of this, how would he have viewed the state of the way One Nation Labour aim to shape it?

Forbes has revealed the richest fictional character for 2015. The list is led by Scrooge McDuck, who has a net worth of over $65 billion from mining and treasure hunting. Scrooge was followed by Smaug, the dragon from The Hobbit. Smaug’s treasure is worth $54.1 billion. Carlisle Cullen from the Twilight saga came in third. Forbes says the uber wealthy vampire has investments worth $46 billion. Cullen was followed by Tony Stark, Charles Foster Kane, Bruce Wayne, Richie Rich, Christian Grey from 50 Shades of Grey and Tywin Lannister from Game of Thrones. You can see the full list here. Take a look: