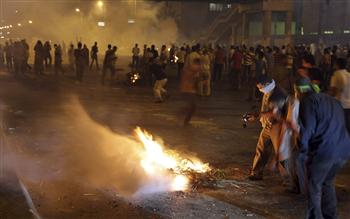 Death toll from attack on Morsi supporters rises to at least 70: Muslim Brotherhood

Racism in the US & the Headscarf in Turkey

At this point, I’d like to mention Sana Rahim, a young Pakistani-American girl who went to Istanbul Bilgi University for a summer exchange program in 2009 but because she wears a headscarf she had a problem in being allowed to study at the university

Yasemin Çongar is the author of four books in Turkish, including Artık Sır Değil (No More A Secret), a detailed analysis of the US diplomatic cables on Turkey first made public by WikiLeaks. A former Washington bureau chief of Milliyet (1995-2007)

The common ground in Salafism and Liberalism

One of the most memorable details of the Egyptian coup d?état was probably the backdrop of the live broadcast

UNDP set to move its regional center to Istanbul

Turkish and U.N. officials have reached an agreement in principle to move the United Nations Development Programme

Mortar fired from Syrian territory kills one in Ceylanpınar

A stray mortar fired from the Syrian town of Ras al-Ayn, killed a father and injured his two sons in the Turkish border town of Ceylanpınar