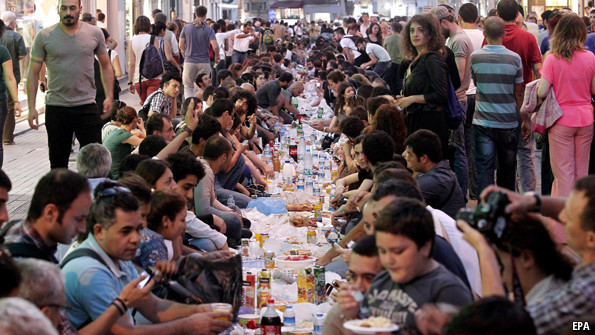 WITH his scruffy beard, baggy trousers, plastic slippers and prayer beads, Ihsan Eliacik seems the archetypal conservative Muslim. He is anything but that. At a gathering of anti-government protesters in Istanbul?s secular Besiktas neighbourhood he was applauded when he railed against Turkey?s prime minister, Recep Tayyip Erdogan, after breaking the Ramadan fast, the Iftar (pictured), with a motley bunch of students, hippies and gays.

The Gezi spirit and the forums

Gezi Resistance has raised awareness about the importance of public spaces and the need for democratic platforms of deliberation. The local park forums are open to everyone who wants to join, and the only rule is to be respectful to others? cultural and ethnic backgrounds, and sexual orientation.

Reframing the agents of resistance at Gezi Park

As the bearer of an underlying democratization process in Turkey with all its paradoxes, AKP still goes unchallenged insofar as the different groups of opposition who became visible in Gezi Park still cannot put forth convincing arguments to win the ?50 per cent?.