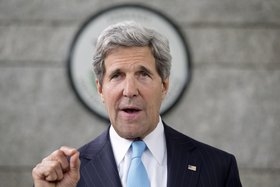 Top news: The Arab League on Wednesdaybacked a plan by U.S. Secretary of State John Kerry to restart peace talks between Israelis and Palestinians.  The endorsement, carried by the Jordanian state news agency, came after Kerry met with an Arab League delegation in Amman on his sixth trip to the region since taking office. In supporting Kerry’s “great efforts” to revive the peace process, the Arab Leave reiterated its commitment to the Arab Peace Initiative, first proposed by Saudi Arabia in 2002, but stressed willingness to adjust the pre-1967 borders through mutually agreed land swaps.

The Guardian (UK) Wednesday, July 17, 2013, p. 26 James E Baldwin * The democratic Islamist parties can avoid alienating opponents ? Tunisia?s gets this, Turkey?s does not. Egypt?s coup was not just a major shock for Mohamed Morsi, but also for the Middle East?s most successful Islamist party: Turkey?s AK party. When news of

The Brotherhood should have listened to Erdoğan

International relations contains many ironies. It will be recalled that Prime Minister Recep Tayyip Erdoğan

Syria war at the gates of Turkey

The Egyptian plight and the future of inclusive democracy

Many people hailed July 3rd outer of Mohammed Morsi as the second revolution in Egypt in the span of two years. The controversy, however, still continues in the intellectual circles among those who consider what happened a revolution and those who consider it a coup. Each group advances its reasons to legitimize its position and defend its take on the crisis. Any objective analyst, however, would call it what it was; a coup d?état supported by large throngs of protesters under the banner of a wide and well organized opposition, Jabhat al Inqadh Al Watany (National Salvation Front), dissatisfied with the Muslim Brotherhood.

Turkey’s support for rebels in neighboring Syria is helping to fuel anti-government protests that continue to unsettle the country. But analysts say the demonstrations aren?t about to prompt Prime Minister Recep Tayyip Erdoğan?s government to alter its policy on the Syrian conflict

Turkey will not send a congratulatory message the ?coup administration? in Egypt

Forget legitimacy: the Egyptian Army?s intervention has come at the expense of trust

The west needs to take a step back from the ?coup or revolution? debate to consider what the overthrow of Morsi means for democracy in Egypt, and remember why democracy is the best bad system. The Army?s intervention has sowed the seeds of mistrust for generations.

Egypt?s current crisis has been called the worst in the country?s history. In fact, it bears a striking resemblance to a previous episode, almost 60 years ago, when Gamal Abdel Nasser replaced a fragile constitutional order with a military autocracy.