The time is now for wealth taxes in Britain

Taxing wealth is an underexplored option in the UK, given the scale of wealth inequality. A new project confronts this head on, with proposals for radical reform.

Real or imagined, there is a widespread grievance in Britain’s ethnic majority that they no longer come first. Does belonging justify increased entitlement, or is this privilege rightly being swept away?

*All links lead to texts in Spanish unless otherwise noted.

The 1929 stock market crash produced an economic crisis that put millions of people in financial straits. The economic collapse meant large-scale job loss, and consequently, misery for millions of families. The situation became the perfect storm for the rise of fascist movements, which came to power in Germany and Italy, and whose sinister effects we all know well.

Beauty and the Beast on Britain and Europe

The war of words over Europe in Britain cannot be called ‘debate’. A former Europe minister examines two serious and opposite thinkers on Europe, and asks whether their arguments could have impact in Britain.

The Europe debate goes on and on. But debate may be a misnomer. What we are witnessing is preaching not debate. We hear the utterance of fixed opinions not the dialogue that seeks to change minds. Rather late in the day, commentators who have gone along with the modish salon Euroscepticism especially prevalent in London are waking up to the fact that Britain leaving Europe is now serious politics.

Structures and Solutions for the EU?

The economic crisis has been the main topic of discussion for a few years in the European Union.  Apart from sovereign debt and the financial aspect, there are three other fundamental dimensions to the crisis that Europeans must resolve: The political and social dimensions, and the question of competitiveness. 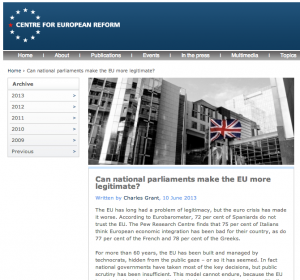 Latvia has been given the go-ahead to become the 18th member of the Eurozone in January 2014. The country had fulfilled all the conditions for introducing the single currency, the European Commission announced on Wednesday. Latvia has earned its membership by submitting to a macroeconomic shock therapy, some commentators write. Others accuse the Commission of just aiming to improve the battered reputation of the monetary union for political reasons.

The quest for solutions to the Eurozone crisis has been interspersed by Franco-German controversies. But national differences, which are inevitable in the economic sphere, do not impede vital convergence. Making good use of differences to take Europe forward is the permanent challenge for both countries.

A European watchdog in Paris is going to snatch regulatory control of Libor from the British ? or so the European Commission is proposing. It is the stuff of nightmares for the UK Treasury. The political land-grab is the most striking element of a broader shake-up to restore faith in the largely unregulated and, in some cases, shockingly amateur business of compiling benchmarks for everything from heating oil and coal to mortgage rates.

Greek bailout: what did the IMF really recognize as problematic?

On June 5, 2013, the IMF published an ex post evaluation of the macroeconomic adjustment programme for Greece. Not few were those who ventured to interpret parts of the content of this report as yet another mea culpa from the side of the international organization and from there proceed to criticize the other two EU institutions participating in the ?troika? mechanism, the European Commission and the European Central Bank, for their unwillingness to publish anything that could qualify as genuinely self-critical.

France?s Economy is in a Second Recession

One of the first demonstrations against President François Hollande saw few thousands march peacefully against the strict austerity measures unveiled by the Socialist government. France is the worlds?s fifth-largest economy, with subsided borrowing costs and a continuing modest household debt. Furthermore, a high birth rate coupled up with per hour worked, make French employees rather productive.

Husby and territorial stigma in Sweden

This statement appeared at the beginning of June in the Swedish broadsheet SVD, calling for a public investigation into the recent uprisings in Swedish suburbs.

The pyres of Spring

The riots which beseiged Stockholm’s suburbs in late May, are not indicative of some ?exclusion? from mainstream Swedish society, but of the absence of society itself.

When Jeremy Bentham came up with the idea of Panopticon, a new prison model, in 1787, he surely didn?t have in mind that three centuries after constant surveillance would be possible in the non-material world: via the Internet.

Your guide to EU free movement and access to welfare

As the secretariat to the All Party Parliamentary Group for European Reform, Open Europe has prepared a new report looking at EU free movement and the lifting of transitional controls on Bulgaria and Romania in 2014.

Usury in the UK 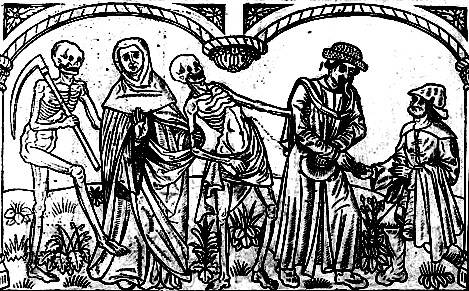 A UK Parliamentary committee blasted the Office of Fair Trading — a consumer watchdog agency that is supposed to regulate moneylenders — for doing effectively nothing to curb the growth of usurious, predatory moneylenders who attack poor and vulnerable people. There are 72,000 consumer credit firms in the UK, some chargin annual interest rates of 4,000%, but the OFT has never fined a single firm for breaking lending rules. On some rare occasions, it did shut down firms, but did nothing to stop them from reopening immediately under another name.

The far right in Greece has become completely independent from the right, and is turning into a loose canon against New Democracy rather than SYRIZA or the other parties of the centre-left.

French President François Hollande and German Chancellor Angela Merkel spoke out in favour of appointing a full-time Euro Group boss on Thursday in Paris. They plan to present proposals for who should occupy the post at the EU summit in June. Commentators see this joint stance as a feigned truce and point out that only the day before Hollande had criticised that the EU was interfering too much in French affairs.

Any expansion of NATO to include Sweden and Finland would upset the balance of power.

Britain and benefit tourism: a story full of holes

What can an EU citizen entering Britain expect from its welfare system? And is this fair? A Citizens Advice Bureau adviser gives us the real story on migrants and benefits.

[All links lead to French-language webpages unless otherwise stated.]

A violent fire destroyed an abandoned factory in the eastern French city of Lyon squatted by families from the Roma community, killing two women and 12-year-old child. In the aftermath of the tragedy on May 13, 2013, the survivors relocated into a school open only in the evenings, leaving them outside in the rain during the day.

What Europe? What bottom up? A reply to Etienne Balibar

For its citizens, Europe has become a cold and alienating power, instead of the welcoming space it was meant to be. Where did that political and intellectual left which in the last two decades has been decisively Europeanist go wrong?

As the FTT threat wanes (a sizeable victory for the UK we might add) another battle threatens to flare up in the wider debate about financial regulation within the EU ? albeit a smaller but still concerning one.

The IMF angered the European Commission with its self-critical remarks on the Greek bailout programme on Thursday. Among other things it admitted having underestimated therepercussions of the austerity policy. Some commentators criticise the Fund’s constant misjudgements. Others defend the bailout package, saying it has made reforms possible and given Europe more time to address the situation.

The Woolwich attack can be seen as a more scrupulous, even moral, development within terror tactics. It tells us nothing about the “Muslim community”, and reveals the success of the security forces rather than the failure.

The education secretary’s reforms fly in the face of all that we know about creativity and how best to nurture it. If we want our children to prosper in the world yet to come his plans must be opposed.