What Is TPP? It’s the Biggest Global Threat to the Internet Since ACTA

The United States and ten governments from around the Pacific are meeting yet again to hash out the secretTrans-Pacific Partnership agreement (TPP) on May 15-24 in Lima, Peru. The TPP is one of the worst global threats to the Internet since ACTA. Since the negotiations have been secretive from the beginning, we mainly know what’s in the current version of this trade agreement because of a leaked draft [PDF] from February 2011. Based upon that text, some other leaked notes, and the undemocratic nature of the entire process, we have every reason to be alarmed about the copyright enforcement provisions contained in this multinational trade deal.

Civic Engagement in the Digital Age

The well-educated and the well-off are more likely than others to participate in civic life online ? just as those groups have always been more likely to be active in politics and community affairs offline.

With CISPA dead, a look ahead to the Senate?s coming work on cybersecurity

Why do governments get Internet surveillance so wrong?

This weekend saw the election of the first Pirate Members of Parliament to a national-level, proportional parliament. (Pirates have previously been elected into the European Parliament, the Czech Senate, multiple state-level parliaments, and many local councils.)

Why Los Angeles could become the next technology epicenter

from The Next Web by Ilya Pozin

Los Angeles is one of the world?s largest and most glamorous cities ? it dominates the entertainment industry, produces tremendous wealth and stands as symbol of American promise and success.

Support for Online Free Speech Widespread in the Arab World

Just a little more than two years ago, the world witnessed the overthrow of three North African dictators and ensuing protests across much of the Arab world on television and social media, the latter of which was much lauded as a catalyzing tool. But while 2011 was a time of hopefulness and increased openness throughout much of the region, 2012 brought about increased repression, both online and off. From Bahrain, named an ?enemy of the Internet? by Reporters Without Borders, to Egypt, the trend is toward censorship, surveillance, and increased regulation.

The latest incarnation of the Linux Kernel was released this week, and for the first time, it includes code for running Linux on some Google Chromebooks. Chromebooks come loaded with Chrome OS — a web-happy, Linux-based operating system designed by Google — but the new kernel code will make it easier to run other versions of the popular open source operating system on these machines.

Infographic: how money corrupts Congress, and what to do about it 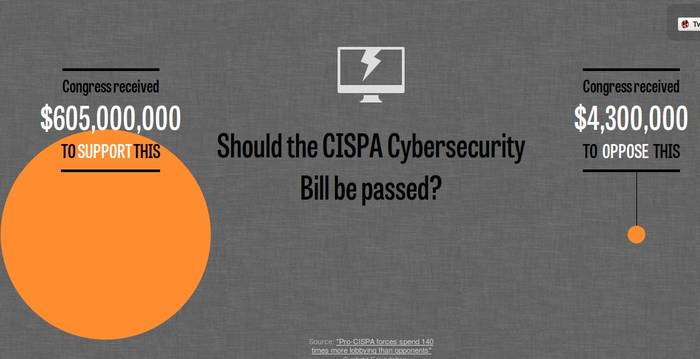 from EFF.org Updates by Rebecca Jeschke