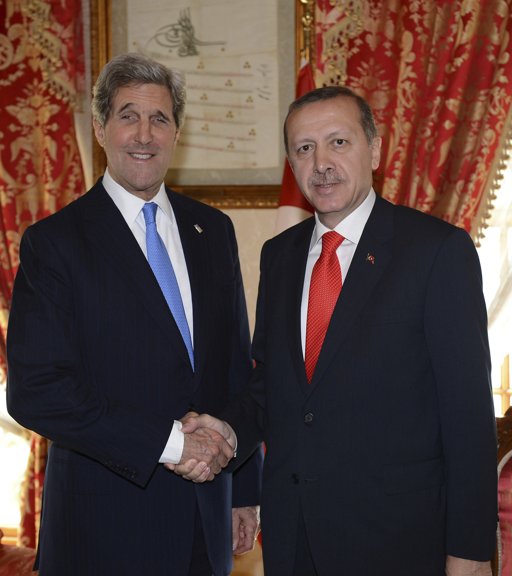 U.S. Secretary of State John Kerry (L) shakes hands with Turkey’s Prime Minister Tayyip Erdogan in Istanbul April 7, 2013, in this handout photo provided by the Turkish Prime Minister’s Press Office. Kerry said on Sunday it was not up to Washington to set a deadline for Turkey and Israel to normalise ties but stressed the importance of restoring a full relationship between the two. REUTERS/Kayhan Ozer/Turkish Prime Minister Press Office/Handout

US Secretary of State John Kerry said Sunday that Turkey can play a major role in the Middle East peace process, calling it a “vibrant and energised” country.

US secretary of state John Kerry said Sunday that the door remained open for a diplomatic solution to Iran’s nuclear ambitions but that talks could not go on forever.

Israel and Turkey Pull Together

Both countries fear spillover from the civil war in Syria, and are particularly concerned with the fate of Syria?s stockpile of chemical weapons, reports Mike Giglio.

Kerry in Turkey for talks focused on Syria, Mideast

US Secretary of State John Kerry arrived in Turkey Sunday to discuss Syria’s civil war and the Middle East peace process as well as to bolster the Turkish-Israeli rapprochement brokered two weeks ago by Washington.

Kerry Moves to Help Turkey and Israel to Restore Ties

from NYT > Turkey by By MICHAEL R. GORDON

The ties of Turkey and Israel have been frozen since 2010, but Secretary of State John Kerry is to meet with Turkey?s premier to discuss an agreement between the nations

VILNIUS (Reuters) – Turkish President Abdullah Gul said on Wednesday the financial crisis in Cyprus presented an “important opportunity” to end the division of the island, split between the Greek

Turkey ‘s foreign minister on Saturday hit back at Syrian President Bashar al-Assad’s claims in an interview that Ankara made a pact with Israel against Damascus.

Turkey can be key to Middle East peace process: US top diplomat

ISTANBUL? Israel and Turkey must stick to their agreement to end a nearly three-year estrangement as a building block for wider Mideast peacemaking, Secretary of State John F. Kerry said Sunday. Kerry did not sugarcoat concern that Muslim politics in Turkey could delay or derail the deal struck last month among President Obama and the volatile leaders of two key U.S. allies. He added stops in