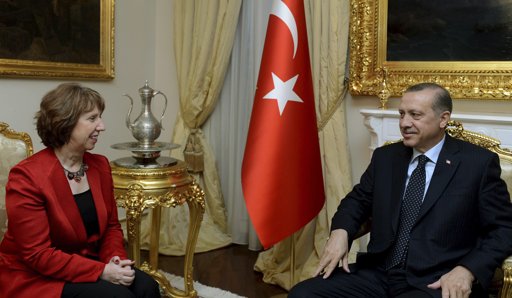 Turkish Neo-Ottomanism is Threatened by Iran

While Turkey is tied to the West through multiple institutions, like NATO, it is still ruled by the AKP party, whose ideology was described in leaked American diplomatic cables appearing in WikiLeaks from a few years back as ?neo-Ottoman? ? meaning it

Financial Times (UK)  Tuesday, April 2, 2013, p. 6 By Joshua Chaffin in Nicosia Divided island. The south?s woes may drive the two sides towards a settlement and new opportunities, says Joshua Chaffin From his office in Nicosia, the divided capital of Cyprus, Hasan Gungor can almost watch the economic crisis unfolding across a barbed

International Herald Tribune (USA) Tuesday, April 2, 2013, p. 7 By Charles Kupchan and Soli Ozel * During his recent visit to Israel, President Barack Obama pulled off a major breakthrough in relations between Israel and Turkey. After forging very close ties during the 1990s, Jerusalem and Ankara have of late gone their separate ways.

There have been four major changes in politics in the last two years in the Eastern Mediterranean.

Turkey is not indifferent toward Israel?s energy projects for transferring the Eastern Mediterranean natural gas and oil to the international markets, Turkish Energy Minister said.

Normalization of the ties with Turkey is one of the most pressing aims on the Israel?s agenda.

BEIRUT: Syrian President Bashar al-Assad accused Turkish Prime Minister Recep Tayyip Erdogan of not having said ?a single word of truth? about Syria?s conflict, in an interview with Turkish media posted on the web.

Turkish President Abdullah Gül said the financial crisis in Greek Cyprus presented an “important opportunity” to end the division of the island.

ANKARA (Reuters) – U.S. Secretary of State John Kerry will visit Turkey on Sunday as part of a trip to Europe and Asia to consult allies on issues including Syria’s civil war, Turkish Foreign Minister Ahmet Davutoglu said on Wednesday. Washington regards Turkey , which shares a 900-km (560-mile) border with Syria, as a pivotal player in backing the Syrian opposition and planning for an era after .