Officials spell out the tough Bank of Cyprus “haircut” that depositors holding more than 100,000 euros must take as part of an EU-IMF bailout.

The German Greens are outraged that the Turkish media has been restricted in reporting the trials of the neo-Nazi group responsible for the killings of 8 Turks.

Italian President Giorgio Napolitano is considering resigning to make way for new elections after all attempts to form a government failed this week.

Voices in Europe Claim: ?Europe for the People, Not the Markets?

From March 11 to 17 European citizens organized a week of protests against the austerity measures imposed on the countries of the European Union as a strategy for ending the economic crisis. Known as the European Counter Summit [es], it is the response to the European Summit in which European leaders gathered [es], and an occasion to make the voices heard of those citizens who defend a ?Europe for the people and not for the markets?. They also reject the negative effects of the policies of cuts and they demand a series of changes in the European Union. People from different countries have protested in the streets and commented on the events through Twitter under the tag #EuropeanSpring.

A better path must be chartered between an untenable taxpayer backing of lenders and the unrealistic punishing of their creditors, says Nicolas Véron

Cyprus ‘will not leave the euro’

Cyprus President Nicos Anastasiades says the island will not leave the euro, as the central bank announces a slight easing of capital controls.

Bankrolled by resurgent Turkey, northern Cypriots have little sympathy for economic troubles in south of the island

From the street in front of his shop not far from the UN-patrolled “dead zone” that runs through Cyprus like a scar, Ozkan Zeki offers his opinion about the great economic crisis that has struck the island’s Greek-controlled south.

The banks in Cyprus armed themselves with five billion euros in cash in preparation for their reopening at noon today. Cyprus and the ECB now fear massive capital flight from the island, which they hope to counteract by limiting money transactions. Cyprus is already experiencing a disorderly bankruptcy, commentators note in horror, criticising that a cornerstone of the EU, the free flow of capital, is being sacrificed.

Cyprus and the Eurozone Social Dimension

from Blogactiv by Elio Pennisi

Government ministers and senior economists warn of a ?brain drain? that could further hurt the country?s already bleak economic prospects

Cyprus crisis: swan-song of the Eurozone

Harsh measures imposed on Cypriot political and financial authorities to address bank failures reveal, once again, that the entire architecture of the EU is in tatters. The geopolitics surrounding the Greek Cypriot crisis is pulling the EU further apart and into the unknown.

from Ideas on Europe by bulgarianperspective 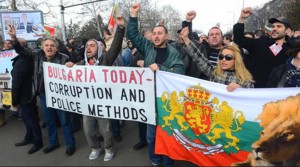 Bulgaria?s constitution includes a wide range of social rights. However, the ?democratic, law-governed and social state? has been characterized as ?chronically incapable of coping with its social problems or improving its level of economic prosperity?.  Moreover, the Bulgarian ?minimal state? often cannot provide its citizens even with basic necessities, such as food, electricity, central heating, or medical care. The post-socialist radical and extensive privatization and economic restructuring have led to systemic impoverishment, decimating entire sectors of the economy and society.

Italian centre-right leader Silvio Berlusconi opposes the idea of a new technocratic government for Italy like that led by Mario Monti.

Germany?s plans for treaty change ? and what they mean for Britain

Last year, German leaders talked of the need to strengthen the eurozone through changing the EU?s treaties. One person who listened carefully was David Cameron. The British prime minister may have assumed that what Germany wants in the EU these days, it gets. When he made a big speech on Europe in January, Cameron predicted that the EU would need a new treaty in the next few years. He implied that Britain would be able to extract concessions from its partners, in return for signing the treaty ? all in time for the referendum on UK membership that he promised in 2017.

Has Germany really gone off the idea of an EU treaty change?

“Austerity Kills ? Not Only Economic Growth” by Andrew Watt

Romanian and Bulgarian migration to Britain: facts behind the fear

Is Britain on the verge of another mass-migration, as with the Poles? Behind the rhetoric on Romanians and Bulgarians set to flood the country, sucking up jobs and benefits, the actual expected impact of the lifted restrictions has gone unspoken.

Violent extremism in Greece: focusing on the far-right

from Project Syndicate by Dominique Moisi

France?s current direction is a source of deep concern in Germany, whose evolution should be seen as a source of inspiration. Indeed, with too much pomp, too many stumbling blocks, and a dearth of dynamism, France today can and should learn from Germany.

from Eurozine articles by Dimitar Bechev

As the Bulgarian post-communist transition faces its moment of crisis and the government resigns, the political class and the economic model it oversaw are the subject of deep dissatisfaction. Dimitar Bechev outlines what went wrong, and what can be expected of Bulgaria’s spring of anger.

Under the pressure of ever-worsening economic news, the Dutch are beginning to ask whether their government’s austerity policies have been counterproductive

Eli Rabett publishes a translation of Stefan Rahmstorf?s superb German-language discussion of what climate scientists expected from a world with unusually low spring maximum sea-ice cover, what their computer models forecast, and just how closely the forecasts correspond to the weather North-West Europe is putting up with.