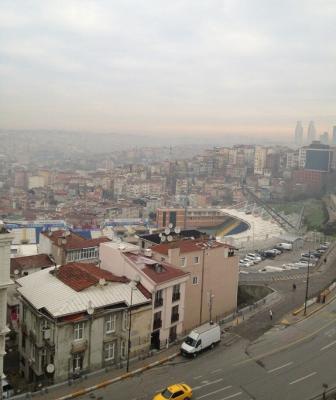 PSY shared the photo above while he was in Istanbul. Some did not like this “ugly” photo that represents Istanbul. Well but isn’t it one of the ways to represent Istanbul?

from Mavi Boncuk by M.A.M
Mavi Boncuk | Pyotr Smirnov founded his vodka distillery in Moscow in the 1860s under the trading name of PA Smirnoff, pioneering charcoal filtration in the 1870s, and becoming the first to utilize newspaper ads along with charitable contributions to the clergy to stifle anti-vodka sermons, capturing two-thirds of the Moscow market by 1886. His brand was reportedly the tsar’s favorite. When Pyotr died, he was succeeded by his third son Vladimir Smirnov (? – 1939). The company flourished and produced more than 4 million cases of vodka per year.

Emrah Güler ANKARA – Hürriyet Daily News
This year?s !f Events include a workshop for blossoming online activists, a gathering with the featured families of LGBT people of the documentary ?Benim Çocuğum? and !f²: Istanbul Live, the simultaneous screening of five festival films in 31 cities in Turkey and its neighbors

As chronicled by Istanbul Eats, the Tünel end of Istanbul?s famed İstiklal boulevard was some two years ago the site of a heated burger war. It all started when a former Turkish basketball-player-turned-restaurateur who had spent time studying in California opened up Mano Burger, a mostly successful recreation of the kind of burger joints the owner frequented in the United States.

The House Hotel Nisantasi, Istanbul: review
Telegraph.co.uk
On the European side of the city, Nisantasi is Istanbul’s Knightsbridge, so this is an address that impresses locals and returning visitors. For first-time tourists, however, its designer store-laden streets lack the colour and character of downtown

Istanbul Municipality Forces Neighborhood To Make Way For Planned …
Green Prophet
Until a recent urban renewal project that forced most residents out, the neighborhood of Tarlabaşı was home to a diverse array of Istanbul’s minority populations. In the early 20th century, Tarlabaşı’s winding streets and colorful buildings were home

His second proposal was to turn toward Bursa, since the city will coalesce withIstanbul as the gulf passage project that will bypass the İzmit gulf with a bridge to directly connect Istanbul to Bursa and İzmir is put into effect. The minister also

The reason for the hike is the increasing cost of flour, yeast, fuel and natural gas, according to the Istanbul Chamber of Bakers, which said that flour and yeast prices had soared by 25 percent in the last year, making the hike unavoidable. Effective

Hi all, I’m going to Istanbul at the end of the month and want to get to my hotel from the airport by metro and tram. I know I need to change at Zeytinburnu to get

Istanbul and its old world charm

I am standing in the heart of Istanbul, a magical city that’s been the cradle of many civilisations. My senses are teased from all directions. The sound of the evening call comes to my ears from the Suleyman mosque, competing with vendors’ cries and

Istanbul paints itself as a hub for modern art

Turkey is a country famed for its rich, artistic heritage and now, the country is also proving itself to be a platform for the contemporary art market as well. Galleries are springing up throughout the capital attracting the artworld’s elite, hungry