Everything You Need to Know About the EU Google Probe

from euro|topics
Leading German politicians have voiced concern that Italy’s ex-prime minister Silvio Berlusconi could return to power. In the run-up to the country’s parliamentary elections on February 24 and 25, Berlusconi’s right-wing coalition has been rapidly gaining ground against the leading left-wing alliance. In view of Italy’s economic entwinement in the EU, commentators see such intervention in Italy’s election campaign as entirely legitimate, charged as it is with populist overtones.

Outcome is unpredictable, with public anger against establishment likely to lead to a fragmented parliament, and snowstorms adding to uncertainty, writes Guy Dinmore

Keeping the lights on: The UK’s looming energy gap and the EU

by Open Europe blog team
The UK’s energy regulator Ofgem’s chief executive Alistair Buchanan made headlines this week by highlighting a looming UK energy generation crisis saying that it:
“will face a tougher challenge over the next few years because of the possibility of a prolonged lack of spare power station capacity.”

by Centre for European Reform
In mid-February, the EU and the US agreed to launch negotiations aimed at sealing a Transatlantic Trade and Investment Partnership (TTIP). Like Yogi Berra, cynics might be tempted to dismiss the project as déjà-vu all over again. After all, this is hardly the first such initiative the two sides have launched. In 1990, they signed a Transatlantic Declaration; in 1995, a New Transatlantic Agenda; in 1998, a Transatlantic Economic Partnership; and in 2007, they established a Transatlantic Economic Council (TEC), a body that was supposed to give political impetus to freeing up commercial relations across the Atlantic. Past attempts to lower the barriers that impede trade and investment across the Atlantic are a story of rising ambition, but frustratingly elusive results. So why bother?

from euro|topics
The European Court of Human Rights and the German Constitutional Court strengthened the adoption rights of same-sex couples in Austria and Germany in two separate judgements delivered on Tuesday. Some commentators welcome these steps towards equal rights for same-sex partnerships. Others fear that children could suffer from the effects of this progressive course.

from euro|topics
The uncertainty over the outcome of the parliamentary election in Italy contributed to losses on the European financial markets on Thursday. Record unemployment, huge debts and lacking competitiveness are taking their toll on the country. The markets have lost their patience, commentators conclude, and call on the new government to push through unpopular reforms to get Europe’s patient back on its feet.

from open Democracy News Analysis – by Francesca E.S. Montemaggi
As Italy is heading to the polls on Sunday for ?the most important election in 30 years?, the vote of Italians living abroad will partly determine the formation of the next government. How do these expats feel about Italian politics, and how are they going to vote? 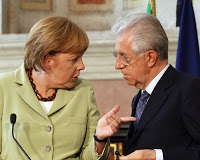 Mario Monti has never claimed to be a professional politician. His lack of political experience became evident when he said,
[German Chancellor Angela] Merkel fears the success of left-wing parties [in Italy], especially in an election year for her. I don’t think she has any desire to see [Pier Luigi Bersani’s] Democratic Party arrive in government.

Italy election: Why voters back Berlusconi, no matter what

A Fistful Of Euros by Brent Whelan
Launched in an act of treachery that brought down Mario Monti?s technocratic government, the Italian national election campaign will end one way or another, to the relief of many, Saturday evening. What might have been a sustained debate on the merits of austerity measures in a prolonged recession, on the future of Italian employment and its welfare state or a host of other pressing issues, has instead taken on the quality of an unsavory burlesque revue. Its stars: authentic if acerbic comic Beppe Grillo, whose 5 Stars protest movement may yet shape the outcome, and sick joker Silvio Berlusconi, whose foolish headline grabs have used up much of the electoral space. But it has been a lavish, large-cast production, with indictments flying, old allies back-stabbing, off-color jokes and evanescent affiliations, a Fellini-esque procession of oddities and crudities unworthy of the noble republic Italy could nonetheless become.

from euro|topics
Bulgaria’s Prime Minister Boiko Borisov announced the resignation of his centre-right government on Wednesday, citing the nationwide protests against rising electricity prices and rioting as the reason. Some commentators believe Borisov has fallen victim to his own lust for power. Others predict that as a cold strategist Borisov will make a triumphant comeback in the upcoming elections.

It only took 37 years but the ?Multi-speed? patent is good news for Europe

They?re still those who talk about a ?multi-speed? Europe as something of the future. Well, first, as ever, multi-speed is an inappropriate expression ? the point is that the end destination for different EU countries no longer is the same (i.e. the Eurozone and the UK). Secondly, different levels of participation are already a fact of life in the EU.