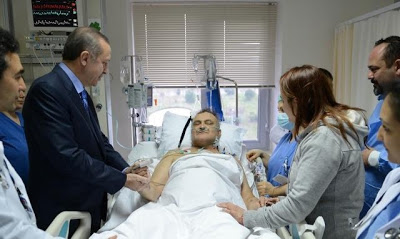 So, why did he visit him at an Istanbul hospital today?

Is Turkey Immune From the Radical Salafi Virus?

from Kamil Pasha by Jenny White
Nervana Mahmoud, writing in the Daily News Egypt, worries that Turkey?s schmoozing with other Muslim countries will expose Turkish society to the virus of radical Salafism. I have argued in my writings that Turkey?s extreme nationalism, Hanefi and Sufi-inflected forms of Islam immunize them to a great extent against non-Turkish transnational forms of Islamism. Naksibendi, Alevi, and members of the Gulen movement are unlikely to be drawn to any form of literalist Islam. Also, among Turkey?s pious Muslim leaders (including some theologians) and in the public in general, there tends to be an antipathy towards anything Arab (except their money, whether through tourism or investment) and a belief that Turkish Islam is superior, that it had been polluted by Arab culture in hundreds of years of rubbing shoulders under the Ottomans. This in a sense is also Mahmoud?s point: that political and economic interaction of the kind that the AKP government is pursuing in the region through these links exposes Turkish society to radical Salafi ideas that then insinuate themselves into the population. That cult follows money, and that exposure without backtalk breeds accommodation.

Turkey and the Kurds: progress on the horizon

from World news: Turkey | guardian.co.uk
If a Kurdish spring happens, the rewards for both sides are significant ? not just the end of a conflict that has claimed 40,000 lives

from Hurriyet Daily News
A rapprochement between the ruling Justice and Development Party (AKP) and the Peace and Democracy Party.

from Hurriyet Daily News
Parliament began debating a bill to prevent the financing of terrorism on Feb. 6, as the opposition party fears the government may misuse the bill.

from Hurriyet Daily News
The main opposition Republican People?s Party (CHP) has marked an early start to getting prepared for its local election campaigns.

AKP says proposal on judiciary not a ?coup?

from Hurriyet Daily News
A proposal introduced by the ruling Justice and Development Party (AKP).