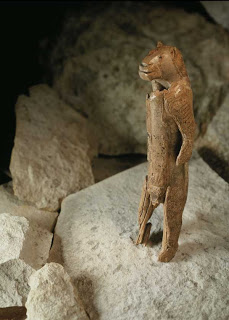 Ice Age Lion Man is world?s earliest figurative sculpture
Even more exciting than the discovery of new pieces, the sculpture?s age has been refined using radio-carbon dating of other bones found in the strata. This reveals a date of 40,000 years ago, while until recently it was thought to be 32,000 years old. Once reconstruction is completed, several tiny, unused fragments of the mammoth ivory are likely to be carbon dated, and this is expected to confirm the result.

An anthropologist’s view of world of indie filmmaking

It’s been five years since Sherry Ortner stepped from the academic world into the inner circle of independent filmmakers and producers gathered in Park City, Utah, to participate in the nation’s largest and most well-known celebration of the indie film

Interview: An Anthropologist on Tiger Woods

from Savage Minds: Notes and Queries in Anthropology ? A Group Blog by Adam Fish
I had the pleasure of pitching a few questions to Orin Starn, Chair and Professor of Cultural Anthropology at Duke University, about ?popular anthropology,? golf, Ishi?s brain, and the right PC sports to play if you?re an anthropologist (its not golf!).

Will Self: the joy of armchair anthropology
The Guardian
In Barry Lopez’s haunting, poetic book about the hyperborean realms, Arctic Dreams, there’s a magnificent story about an Inuit family who are washed out to the seas on a calved iceberg. Nothing is heard of them for about 30 years, until one day they

Wade Davis, The Wayfinders, and more from anthropology blogs

from Anthropology Report by Jason Antrosio
Thank you to reader and archaeologist Hugh McKenzie for highlighting the Wade Davis book The Wayfinders: Why Ancient Wisdom Matters in the Modern World. The audio portion of the lectures is archived at the CBC Massey Lectures link below, and the book gets fantastic reviews on Amazon. So, first some links to The Wayfinders by Wade Davis and then good stuff from the anthropology blogs.

The Foraging Spectrum ? and a spectrum of anthropology