Syrians revolt, fly own flag at refugee camp in Turkey

Syrian refugees started a riot in a Gaziantep refugee camp today, taking down the Turkish flag and replacing it with their own. 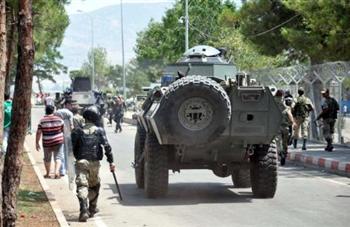 Eight injured in riots at Syrian refugee camp in Turkey

from Yahoo news
KILIS, Turkey (Reuters) – Four Syrian refugees and four members of the Turkish security forces were hurt on Sunday when riots broke out at a refugee camp in Turkey near the Syrian border, the Dogan News Agency said. The clashes erupted when a group of 1,500 or so ethnic Turkmen refugees from Syria arrived at the camp, near the town of Islahiye, witnesses told Dogan. Television footage showed .

from World news: Turkey | guardian.co.uk by Samir Aita
All observers accept that the regime will fall. But do Syria’s neighbours have the power to create a stable united nation?
History is accelerating in Syria, but in which direction? The assassination of heads of the security and military apparatus last week was a serious setback for the Syrian regime. It came at a crucial moment, as elements of the Free Syrian Army were struggling to put the regime under pressure in its Damascus stronghold. Morale was boosted in the anti-regime camp, and other groups joined the battle, freeing different cities and border points.

from Hurriyet Daily News
Both Turkey and Russia will refuse to accept any division of Syria, Turkish Prime Minister..

from Global Voices Online by Amira Al Hussaini
This post is part of our special coverage Syria Protests 2011/12.
Syrian refugees at the Kilis Refugee Camp, on the Syrian-Turkish border, protested against water shortages. Four policemen and 10 refugees are reportedly injured.

Visa restrictions are shutting Turkey out of the EU | Egemen Bağış

from World news: Turkey | guardian.co.uk by Egemen Bağış
The idea of Turks flooding into the EU is absurd, yet ours is the only candidate country to be kept outside the Schengen zone
Istanbul enjoyed the honour of being recognised as the European capital of culture in 2010, and the European capital of sports this year. Such events not only highlight Turkey’s strong national identity and fundamental European values, but also show how this culturally diverse and geographically unique place defies categorisation, straddling east and west, custom and modernity ? and is the quintessential European city.

Turks Seek Freedom to Travel to Europe Without Visas

from NYT > Turkey by By SUSANNE GÜSTEN
Surveys indicate that support by Turks of joining the European Union has declined. But one thing Turks want from the Union is visa liberalization and the freedom to travel to Europe.

Are you hiding something from us?

from Hurriyet Daily News
Dear officials, You have muddled the plane incident so much, you have got it wrong to such an extent that now even your own public …

Will Turkey Divorce Iran Over Syria?

from Kamil Pasha by Jenny White
And here?s an article by Giorgio Cafiero about the fate of Turkey?s rivalry/marriage of convenience with Iran in the face of their split over what should be done about Syria. Will Iran and Turkey divorce over this issue? Click here.

from Kamil Pasha by Jenny White
An interesting new Pew poll was just released that compares Turkey, Pakistan, and countries in the Middle East with regard to values, expectations, their view of specific countries, political parties, personalities.  Here?s the report.

by Acturca
GTE Commentary (Istituto Affari Internazionali) No. 2, July 2012, 2 p by Ian O. Lesser * The escalation of the turmoil and violence in Syria, coupled with the tense military confrontation along the Turkish-Syrian border, underscore the marked deterioration of the strategic environment in Turkey?s Middle Eastern and Mediterranean neighbourhoods. Of all Syria?s neighbours, Turke

from Yahoo news
Turkey is no longer the ‘sick man of Europe,’ prospering as much of the Continent flounders. But experts warn that those fortunes could quickly shift.

Analyst: EU-Turkey relations are bad, but should not get worse

EurActiv Czech Republic, 20 July 2012 Adéla Denková EU-Turkey relations are as bad as they that can be at the moment, largely because of the Cyprus EU presidency. But they should not get any worse because the two sides are dependent on each other, Ayla Gürel * of the Peace Research Institute in Oslo tells