by Turkish Digest
Commission sends strong message to Ankara after Erdogan`s circular
FAMAGUSTA GAZETTE
? Sun, Jun 17, 2012
The European Commission has sent a strong message to Ankara, following a circular issued by the Turkish Prime Minister to Turkish technocrats and diplomats, asking them not to take part in any EU meetings that will be chaired by the Cyprus EU Presidency, which begins in July. 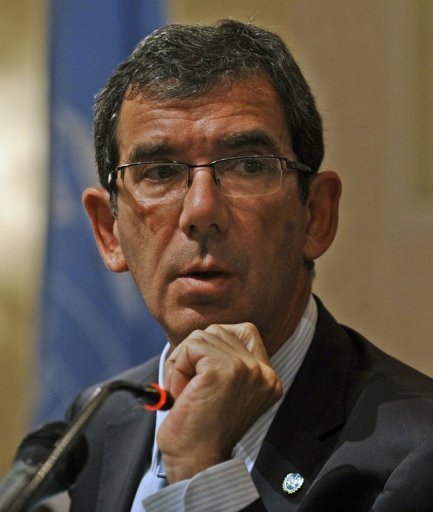 Ambassador Jean-Maurice Ripert, head of the EU delegation in Turkey, listens to a question during a press conference in 2010. European Union diplomats are expressing growing concern at what they see as the increasingly militant stance taken by Turkey’s ruling Islamists. (AFP Photo/Farooq Naeem)

Commentary: Davos on Tour in Istanbul | The National Interest

by Turkish Digest
Davos on Tour in Istanbul

The arrival of the World Economic Forum in Istanbul this week was overshadowed in the Turkish media by the arrival of Madonna and her entourage,

Is Turkey a Western Country? AP, Reuters and AFP Have Different Answers

from Hurriyet Daily News
A Turkish lawyer said on Thursday that Israel had offered to pay $6 million to victims of Israel’s storming of a Gaza-bound Turkish aid flotilla.

from Yahoo news
ISTANBUL As President Obama was feeling his way in foreign policy during his first months in office, he decided to cultivate a friendship with Turkey?s headstrong prime minister, Recep Tayyip Erdogan . Over the past year, this investment in Turkey has begun to pay some big dividends ? anchoring U.S. policy in a region that sometimes seems adrift. Read full article

from World news: Turkey | guardian.co.uk by Conal Urquhart
£4m paid to Jewish foundation in Turkey, which will distribute the money to the victims and their families
The Israeli government has offered £4m in compensation to the families of Turkish activists killed by Israeli commandos who stormed a ship taking part in an aid flotilla in May 2010, according to a lawyer representing the victims.

from NYT > Turkey by By RICK GLADSTONE

Turkish reflections: What I learned at the Istanbul World Political Forum

But on the other hand, AKP rule has been heavy-handed in a variety of disturbing ways, most notably in the protracted detention of the so-called Ergenekon suspects and in its various efforts to manipulate or intimidate the Turkish press.

from Journalist in Turkey, background articles, news and weblog about by Fréderike Geerdink
Is the famous Turkish musician Arif Sag just a hot headed Turk who just can?t deal with the fact that he needs to follow certain rules to enter the Netherlands? Or is his frustration about the treatment he got from the border control at Amsterdam Schiphol airport justified, and part of a bigger problem, namely

from Journalist in Turkey, background articles, news and weblog about by Fréderike Geerdink
ISTANBUL ? A concert of the Turkish singer Arif Sag was cancelled last weekend because of the strict visa restrictions on nonEU citizens arriving in the Netherlands. Sag was questioned at length at Amsterdam?s Schiphol airport and was made to wait so long that he no longer wanted to enter the country and took the

Source: Council on Foreign Relations From the publication web page : Turkey is a rising regional and global power facing, as is the United States, the challenges of political transitions in the Middle East, bloodshed in Syria, and Iran’s pursuit of nuclear weapons. As a result, it is incumbent upon the

Turkey?s sweet talk: Do African leaders read between the lines?

by Turkish Digest
Turkey?s sweet talk: Do African leaders read between the lines? Send to a friend
Thursday, 24 May 2012 21:41

from Mavi Boncuk by M.A.M
Diamond Jubilee Special | Since acceding to the thrones in 1952, Queen Elizabeth II has undertaken a number of state and official visits as well as trips throughout the Commonwealth, making her one of the most widely traveled monarchs in history. As the sovereign of more than one independent state, Elizabeth II has represented both Canada and the United Kingdom on state visits, though the former on just two occasions. For the countries where Elizabeth is sovereign, other than the United Kingdom, the relevant governor-general will usually carry out state visits on Elizabeth’s behalf.Her Majesty Queen Elizabeth II was born in 1926, the elder daughter of King George VI and Queen Elizabeth. She ascended to the throne in 1952 at the age of 25 and has reigned through more than five decades of social change and development in Britain. She is married to His Royal Highness Prince Philip, Duke of Edinburgh, and has four children and eight grandchildren.

The Congressional Research Service (CRS) works exclusively for the United States Congress, providing policy and legal analysis to committees and Members of both the House and Senate, regardless of party affiliation. As a legislative branch agency within the Library of Congress, CRS has been a valued and respected resource on Capitol Hill for nearly a century.

A special relationship with Turkey

by Acturca
The Washington Post (USA) June 8, 2012, p. A19 David Ignatius, Istanbul As President Obama was feeling his way in foreign policy during his first months in office, he decided to cultivate a friendship with Turkey?s headstrong prime minister, Recep Tayyip Erdogan. Over the past year, this investment in Turkey has begun to pay some