In Turkey, nations meet to plan for new Syria

from Yahoo news
Dozens of countries on Sunday sought to set conditions for a new Syria, pushing for tighter sanctions and diplomatic pressure to further isolate President Bashar Assad, while urging the opposition to offer a democratic alternative to his regime. 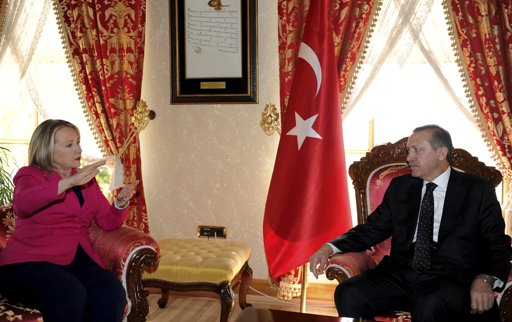 Turkey’s Prime Minister Recep Tayyip Erdogan and U.S. Secretary of State Hillary Clinton (L) talk during a bilateral meeting part of the “Friends of Syria” conference in Istanbul April 1, 2012. Erdogan said the “legitimate demands of the Syrian people must be met, right here, right now” as Western and Arab countries met in Istanbul on Sunday to try to agree on how to support armed rebels fighting to unseat President Bashar al-Assad. Erdogan was addressing a meeting of mostly foreign ministers from around 70 countries including the United States and leading European Union and Gulf powers who call themselves the “Friends of Syria”. Assad’s forces pounded a pro-opposition neighbourhood of Homs city with artillery fire and mortars on Saturday, as his crackdown continued a day after the Syrian Foreign Ministry announced that the year-old revolt was over. REUTERS/Prime Minister’s Press Office/Yasin Bulbul/Handout

from Hurriyet Daily News
The UN must act to stop the violence in Syria, a major conference heard today as bloodshed on the ground claimed more lives.

from Hurriyet Daily News
Turkey’s Prime Minister Recep Tayyip Erdoğan said today Ankara would not back any plan that would help the regime in Damascus to stay in power.

US map of new Middle East

by Acturca
CNN (USA) Business 360 Global Exchange March 30th, 2012, Baghdad As Iraq?s capital emerges from almost a decade of conflict and civil strife it is becoming an economic battleground for Turkey and Iran. Turkish firm Tefirom is contracted to build Baghdad Mall. Featuring a five-star hotel more than 100 meters tall, it is set to

by Acturca
Financial Times (UK) Thursday, March 29, 2012, p. 11 By David Gardner and Daniel Dombey His pictures and posters are these days almost as ubiquitous as those of Mustafa Kemal Ataturk, founding father of the modern Turkish nation. Recep Tayyip Erdogan has come to tower over the country?s political landscape.Elected last June for the third

by Acturca
The Cairo Review of Global Affairs (AUC) 4/2012, Winter 2012 Hugh Pope * The swirling currents of daily political life in Turkey enjoy a wild unpredictability. But in November 2002, when Recep Tayyip Erdoğan?s Justice and Development Party (Adalet ve Kalkınma Partisi, or AKP) swept to power with surprising strength, it turned out that it

by Acturca
Sada (Carnegie Endowment for International Peace) March 29, 2012 By Nora Fisher Onar * Turkey is often touted as an inspiration for the rest of the Middle East?a characterization it accepts and pursues. In recent years, Turkish policy makers have worked hard to establish ?Turkey Inc.?: a model of a relatively free, stable, and increasingly

Moment of truth approaches in Istanbul over Iran’s nuclear programme

from World news: Turkey | guardian.co.uk by Julian Borger
Multilateral talks due to resume on April 14 under the shadow of oil sanctions and military threats
The most likely date and venue for the resumption of nuclear talks with Iran are April 14 in Istanbul, where the last round of negotiations collapsed over a year ago.

Is Turkey becoming Iran or Russia?

from Today’s Zaman, your gateway to Turkish daily news :: Columnists by ORHAN KEMAL CENGİZ
As soon as I look at the tweets that are running across the screen, I saw this striking message from my close friend Ziya Meral, saying: ?Every interview I gave, every journalist I talked to all across the globe had one anxiety: Is Turkey becoming Iran or Russia??