KONY 2012 is a film and campaign by Invisible Children that aims to make Joseph Kony famous, not to celebrate him, but to raise support for his arrest and set a precedent for international justice. 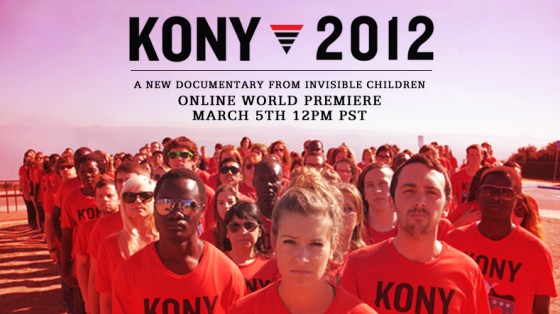 Kony 2012 began as an unexpected viral video that Invisible Children, a California-based non-profit, uploaded to Vimeo on February 20th and to YouTube this past Monday.  Today those two videos have over 65 million views, ?Kony? is a trending topic on Twitter, and the phrase ?Kony 2012? returns over 4,000 hits on Google.

KONY 2012 May Be Flawed, But Slacktivism Isn?t the Enemy 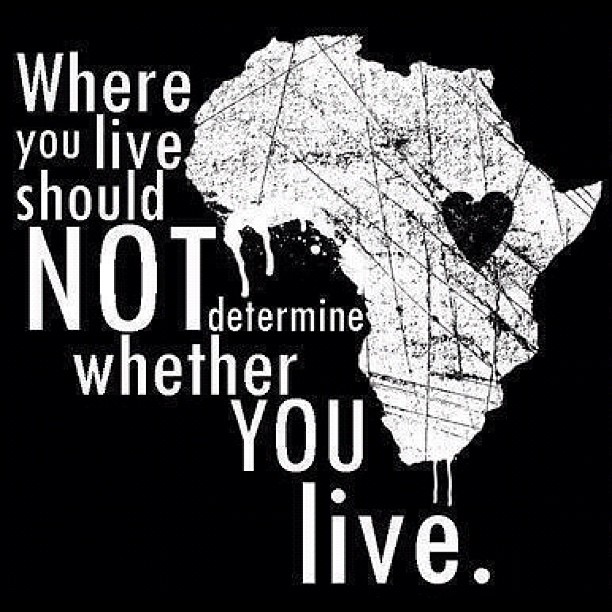 from technosociology by zeynep
By now, you probably know the story. A previously little-known group made a slick video with just the right mix of ?the triumph of the human spirit? meets deep human tragedy about Ugandan warlord Joseph Kony. The video goes super-viral.  In just a few days, it is viewed more than 60 million times on just Youtube alone. Then comes a swift backlash and many people criticize the content of the video?ranging from its factual errors, to questions about the group?s finances, to the implicit ?White Savior Complex?.  That is indeed an important discussion, one that has been covered in-depth elsewhere and not what I want to focus on here. (I wrote a bit about those topics in my short op-ed in the New York Times here).

from Global Voices Online by Ndesanjo Macha
This post is part of our special coverage Kony 2012.

from Mashable! by Sonia Paul

Digital Activism Research: Learning a Lot About a Little 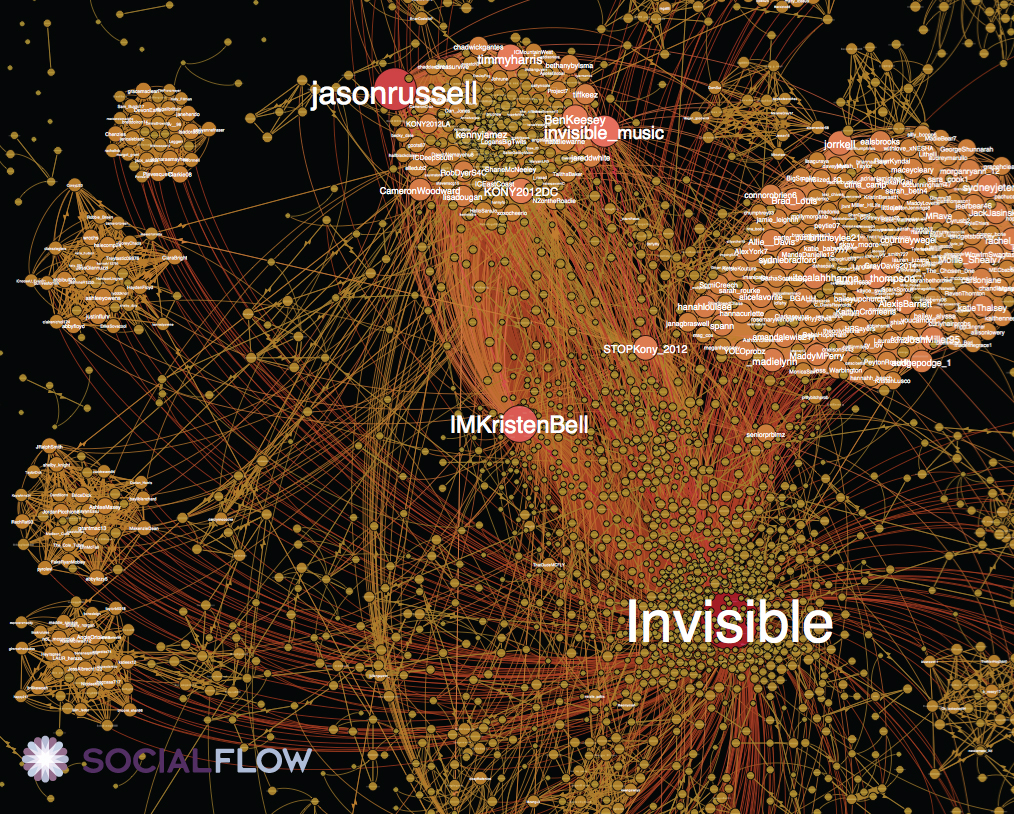 Kony tweets: a gorgeous N of 1 (source: Gilad Lotan)
We now know a tremendous amount about the Kony 2012 campaign and excellent analysis keeps rolling in: on the Ushahidi blog, Patrick Meier has posted a variety of responses from Ugandans and Ethan Zuckerman hasposted a gorgeous visualization from Gilad Lotan of the first 5000 Kony tweets (see left). At a panel at SXSW yesterday, I learned that Invisible Children plans to release their own data on the campaign.

After Kony 2012, ?What I Love About Africa? Reclaims Narrative

from Global Voices Online by Lova Rakotomalala
Anyone following online citizen media closely this month, would inevitably have come across the heated global debate over the Invisible Children viral campaign to stop Ugandan war criminal and rebel army leader

The Power of Youth: How Invisible Children Orchestrated Kony 2012

from apophenia by zephoria
To many people unfamiliar with Invisible Children, the Kony 2012 campaign looked like a brilliant example of ?viral? media spread. The center of the campaign is a compelling 30-minute film where a father talks to his son about the evil practices of the Ugandan war lord Joseph Kony. The father makes it clear that his number one goal is to make Kony a household name in order to ?raise support for his arrest and set a precedent for international justice.? In the days that followed, critics stepped up and critiqued the simplistic narrative (and colonial rhetoric) put forward by Invisible Children. (If you haven?t read it, I strongly recommend Ethan Zuckerman?s ?Unpacking Kony 2012.?) Yet, what about the media campaign itself? Activists (and brand marketers) everywhere are in awe of what appears to be a magical campaign that came out of nowhere. But there?s more than meets the eye here.

[Cross-posted from the Ushahidi blog]

Invisible Children?s #Kony2012 campaign has set off a massive firestorm of criticism with the debate likely to continue raging for many more weeks and months. In the meantime, our colleagues at Al-Jazeera have repurposed our previous #SomaliaSpeaks project to amplify Ugandan voices responding to the Kony campaign: #UgandaSpeaks.

Why Kony 2012 Brought Out the Cyber-Skeptic in Me

from The Meta-Activism Project by Mary C Joyce
I spend most of my time on this blog defending digital activism, but when I heard about the Kony 2012 video, even before I watched it, I decided to express my opinion by posting this picture on my Facebook page:

from social media vb by Deborah Sweeney
What works in the macro scale works in the micro scale, so even if you would never think that your own social media campaign could ever be received with this level of reaction, it is better to be safe and prepare a response just in case.

from …My heart’s in Accra by Ethan
Teju Cole, who just won a prestigious award for his novel ?Open City?, offers a brief essay, in Twitter form, as a reaction to Invisible Children?s Kony 2012 campaign:

from social media vb by colindelany
Guest article! In the piece below, Abigail Collazo (editor of @Fem2pt0 and a progressive communicator, feminist organizer and Democratic strategist, currently at Turner Strategies) looks at a viral phenomenon that made the NY Times today.

from …My heart’s in Accra by Ethan
This Monday, March 5th, the advocacy organization Invisible Children released a 30 minute video titled ?Kony 2012?. The goal of the video is to raise awareness of Joseph Kony, leader of the Lord?s Resistance Army rebel group, a wanted war criminal, in the hopes of bringing him to justice.

from social media vb by socialintelligenceevolution
Kony 2012 is s a well crafted and effective campaign, and thus worthy of thoughtful analysis and reflection. Let’s identify some key learnings that you can take away from their strategies and tactics.

from FP Passport by Joshua Keating
First, a brief housekeeping note: Yesterday’s guest post on the Kony 2012 campaign was written by Michael Wilkerson, not me. If you link to it from your blog, Facebook page, or Twitter, (thanks!) please give Michael full credit.

from open Democracy News Analysis – by Jo Tyabji
Invisible Children’s controversial campaign highlights the pressing question of international engagement in conflict, which openSecurity seeks to address through our debate ‘Peacebuilding from a Southern Perspective’. 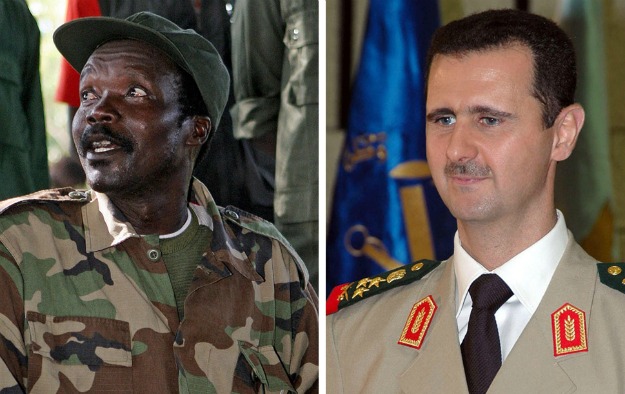 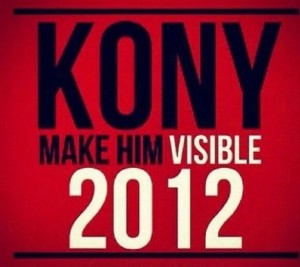 by Ethan
Two important reads on Invisible Children and the #Kony2012 campaign:
Gilad Lotan of SocialFlow has been crunching the data on the spread of Kony2012 on Twitter and has some very interesting preliminary results. (He?s also been at SXSW this past week, so this is an impressive effort, as he?s been doing analysis while appearing on panels, including a panel on the Kony campaign.) I?m hoping to work with Gilad on some further data-crunching, but his initial findings are fascinating.

from Mashable! by Sonia Paul

KONY 2012: How Social Media Fueled the Most Viral Video of All Time