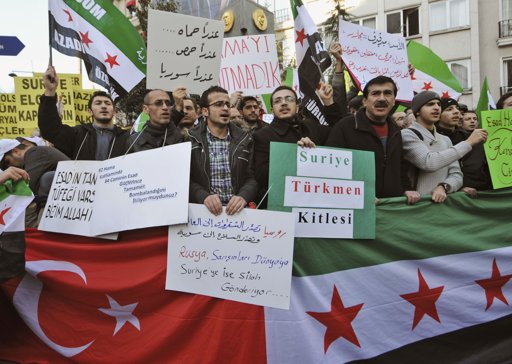 Syrians living in Turkey and human right activists stage a protest outside the Syrian consulate to condemn the latest killings in Syria, in Istanbul, Turkey, Saturday, Feb. 4, 2012. The banners read: “Assad has arms, we have God” and ” Syrian Turkmen community.” Syrian forces unleashed a barrage of mortars and artillery on the battered city of Homs for hours before dawn on Saturday, sending terrified residents fleeing into basements and killing more than 200 people in what appeared to be the bloodiest episode in the nearly 11-month-old uprising, activists said.(AP Photo)

ISTANBUL: About 400 protesters threw objects and tried to storm the Syrian consulate in the Turkish city of Istanbul Sunday, Xinhua reported. Police fired tear gas to disperse the protesters in front of the consulate located in Nisantasi area of

Photo: Anonymous / AP Hundreds of Syrians living in Turkey and human right activists shout anti-Assad slogans as they stage a protest outside the Syrian consulate to condemn the latest killings by Syrian regime in Syria, in Istanbul, Turkey, Sunday 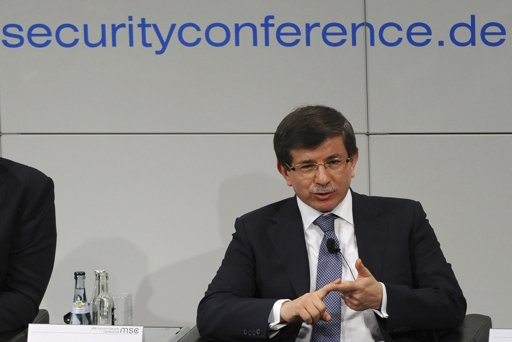 Islam, democracy and prosperity: Turkey scores in Mideast, but the model has flaws

from Yahoo news
ISTANBUL (AP) ? For adversaries in a long-distance spat, they made an odd couple. Turkey’s leader, a brash visionary who propelled his country to regional prominence, tangled with an American author who dwells on the existential in his work.

The Story of the Turkish Fast Food that Conquered Germany | EurasiaNet.org

When Germany started bringing over Turkish guest workers in the 1960’s, little did the country’s leaders realize that it was also importing what was to become Germany’s top-selling fast food: doner. Indeed, in many German cities, doner is as much part of the culinary landscape as bratwurst and other sausages.

Interview with Dr. Beken SAATÇİOĞLU on her current and forthcoming research projects about EU?s Membership Conditionality and Turkey?s EU Accession

from Changing Turkey in a Changing World by Changing Turkey
Dr. Beken Saatçioğlu (Boğaziçi University, Turkey)
Dr. Saatçioğlu has MA and PhD degrees on International Relations and Comparative Politics at University of Virginia (2009). She also completed  her Postdoc in KFG Research College?s ?The Transformative Power of Europe? project at Free University of Berlin (2010)
Changing Turkey: Could you inform our audience about your research interests and recent projects on

Tags: turkey as a model, turkey vs. syria, turquie