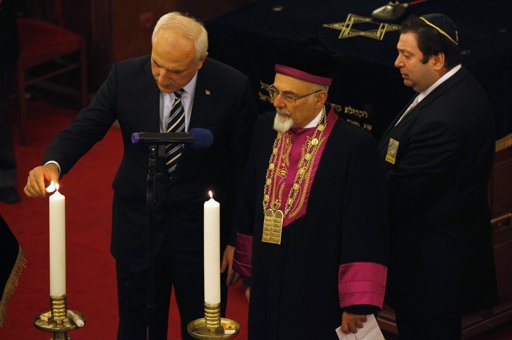 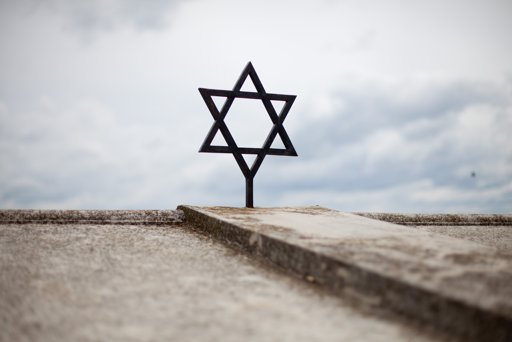 The Star of David is seen in a cemetery. Turkish public television will show an epic French documentary about the Holocaust, the first broadcast of its kind by national media in a Muslim state, it was announced Wednesday. (AFP Photo/Andrei Nacu)

from Hurriyet Daily News
Turkish Nobel Laureate Orhan Pamuk has denied having a relationship with Turkish-Armenian artist Karolin Fişekçi through an official notice issued through his lawyer yesterday, and has requested that she stop making statements about him to the press.

Turkish Nobel Laureate Orhan Pamuk has denied having a relationship with Turkish-Armenian artist Karolin Fişekçi via an official notice issued by his lawyer Jan. 23 in which he requested she stop making statements about him to the press.

from Kamil Pasha by Jenny White
An article by Karolina Tagaris about how much Greeks love Turkish soap operas (click here for full essay).
ATHENS (Reuters) ? When an Athens taxi driver learned his passenger was the boss of an Istanbul-based company that brings Turkish TV dramas to Greece he reached for his phone, called his wife and put her through to the man sitting in the back seat ?She had to know what happens next,? Global Agency chief executive Izzet Pinto said with a laugh. ?I was expecting success but not like this.? 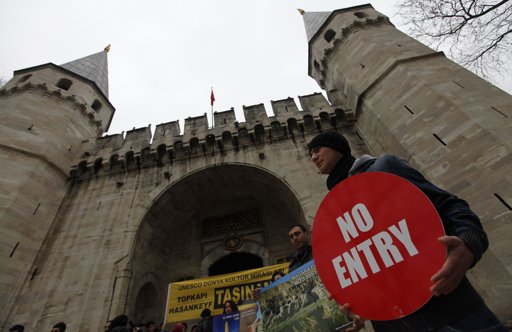 Villagers from Hasankeyf and members of Turkey’s Nature Association block entrance of the Topkapi Palace to protest Ilisu dam project, in Istanbul January 26, 2012. The Ilisu Dam and hydroelectric power plant project, which would swallow up more than 80 villages and hamlets by the time of its planned completion in 2013, will also affect Hasankeyf, a town on the banks of the River Tigris known for its unique archaeological heritage that includes Sumerian, Roman and Ottoman monuments. REUTERS/Murad Sezer

from Yahoo news
Turkey, where jewelry, fabrics and spices have been haggled over in bazaars for centuries, was among the last European countries to embrace modern shopping centers. It?s catching up quickly.

By AYLA ALBAYRAK Thousands of people held placards and a portrait of the slain journalist Hrant Dink during a commemoration ceremony in front of the offices of the Armenian newspaper “Agos” in Istanbul on Wednesday. ISTANBUL?Tens of thousands of Turks

from Global Voices Online by Onnik Krikorian
Thousands have marched in Turkey to commemorate the fifth anniversary of the murder of Turkish-Armenian journalist and Agos newspaper editor Hrant Dink. Angering Turkish nationalists with his outspoken position that the 1915 massacre and deportation of as many as 1.5 million ethnic Armenians as the Ottoman Empire collapsed constituted genocide, Dink was shot dead outside his office in Istanbul on 19 January 2007.

from NYT > Turkey by By SUSANNE GÜSTEN
Hundreds of women a year in Turkey are killed by their husbands, lovers or male relatives. With most of them dying despite seeking police protection, one group has issued a call to arms.

from Bianet :: English
The Court of Appeals upheld the life sentence handed down to the former husband and murderer of Ayşe Paşalı. Çalışkan from the Platform to Stop Women Murders appreciated the decision as a precedent and the yield of the women’s struggle against violence against women.