from EurActiv.com
The European Court of Justice issued yesterday (24 November) a historic ruling establishing that member states cannot impose the filtering of the Internet for the purpose of preventing illegal downloads of copyrighted files.

from Ideas on Europe by Ronny Patz
There is the tendency by those who follow EU social media to focus on the social media aspects of all this. There is the risk to lose sight that quite some substance is dealt with in EU-focused or EU-covering blogs.

by Grahnlaw
Ronny Patz made some interesting observations about policy-oriented euroblogs. He mentioned and linked to a number of interesting blogs in different policy areas.

Europe in Blogs and Social Networks ? Further thoughts ahead of the academic workshop #ViaEU

from Ideas on Europe by Ronny Patz
Hard EU politics ? in particular EU law-making ? is not made in social media, it is not or almost not influenced by social media communication, but it becomes more accessible through social media as political and institutional activities and conflicts are more frequently visible at the time they occur.
That?s the main statement I?ve decided to begin with for my talk tomorrow. Whether we are EU citizen, EU-focussed academics or policy-specialists whose policies of interest are influenced by EU-level decisions, social media allows us to observe more in detail and more ?in time? when and where there are relevant developments, not just in Brussels but also in the dozens of other locations EU politics are shaped at (e.g. on Malta).
Social media, and that?s where ?social? comes into play, then also allow (in principle) the interaction of the different groups among each other but also with other groups, especially at the time when things happen. 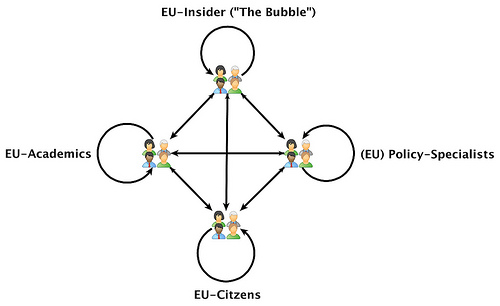 from open Democracy News Analysis – by Paulina Tambakaki
Is democracy a luxury good which the global and European economy simply cannot afford ? at least, given the exceptional character of the current euro crisis?

from Blogactiv by Michael Berendt
It?s curious how centre-right governments have come to dominate the political scene as Europe faces its biggest economic crisis for a generation. Given the fierce pressures on public spending, the battle by public sector workers to protect their jobs and pensions, whittling down of welfare programmes and high levels of unemployment, especially among young people, […]

from open Democracy News Analysis – by Kirsty Hughes
The UK has a choice over whether to be a small player on the margins of Europe. But to become so without any serious national debate is surely a major error.

by Grahnlaw
In concrete terms the French president Nicolas Sarkozy and the German chancellor Angela Merkel accepted the invitations from the Italian prime minister Mario Monti to visit Rome in a near future.

The (un)controlled disintegration of the eurozone

from Ideas on Europe by Protesilaos Stavrou
Ever since 2008 when the shock wave coming from the collapse of Wall Street hit Europe, the euro edifice has been unraveling, partly due to its problematic structure, its institutional gaps, but also thanks to the ill thought policies of the European leadership that have been adding more pressure to the collapsing single European currency.

Why the ??Indignados?? Movement is Not Happening in Belgium

Crises of euro and democracy

by Grahnlaw
Our national leaders never have the time to make the EU democratic, but they always have time for another eurozone failure.

from open Democracy News Analysis – by Julien Etienne
Rather than offering any illumination into the causes of the Greek crisis, Channel 4’s ‘Go Greek for a Week’ held the mirror up to British society’s image of itself – but our delusions of fair play and national propriety are just that.
Earlier this month Channel 4 broadcast ?Go Greek for a Week?, a reality show cum documentary in which a fake Greek consultant visited three British citizens: a hairdresser, a bus driver, and an orthopaedic surgeon. He proposed to each that they ?go Greek?, which means, as the audience quickly realises, retiring early with handsome pensions, being paid all sorts of extras for doing one?s job according to description, cheating on tax, and paying and being paid bribes.

by Open Europe blog team
Following the Commission’s ‘Stability Bonds’ proposal on Wednesday (see our previous post here so the title makes more sense) and ahead of an upcoming paper presenting our more in depth examination of the potential for eurobonds, we’d though it would be worth highlighting a few of our concerns on recent eurobonds proposals expressed in our ‘No Way Out’ paper.

from euro|topics
German Chancellor Angela Merkel and French President Nicolas Sarkozy agreed on Thursday on plans to amend the EU treaties in a move to impose budget discipline on the countries of the Eurozone. Italian Prime Minister Mario Monti also supported the initiative. Commentators say Monti’s presence will facilitate the euro bailout, which will gain momentum thanks to the resolutions.

All new EU websites coming up?

from Ideas on Europe by Ronny Patz
?Unfortunately, those looking for documents gave the lowest satisfaction rating, with 13 percent ranking the site either ?poor? or ?very poor?.?
That?s one of the findings of a user survey the EU Commission web team have made ahead of the revamp of the Commission?s website. And this was one of the reasons for my life hacking posts last week (here and here) trying to show how one can still find documents on EU websites.