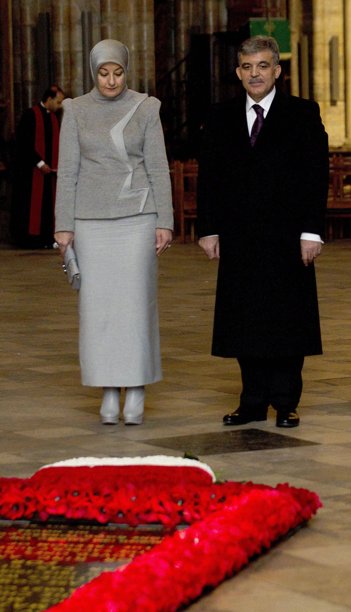 Abdullah Gul visits Britain as EU turns its back on Turkey

from World news: Turkey | guardian.co.uk by Nicholas Watt
Turkish president in Britain for state visit as hopes of joining EU crumble in the face of opposition from France and Germany
Amid all the drama of the eurozone crisis, the political world has missed out on a highly significant development in the EU. This is the junking of Turkey’s hopes of joining the EU.

Why is the West kissing Erdoğan now?

from Hurriyet Dailynews by HDN
We have been through many, many things in the past months, some of which have been unbelievable.

by Acturca
The Daily Telegraph (UK) 22 Nov 2011 By William Hague * The case for a strong bilateral partnership between Britain and Turkey has never been stronger, writes William Hague. Last year within three months of becoming Prime Minister, David Cameron arrived in Ankara. When asked ?Why Turkey?? and, ?Why so soon?? he said: because Turkey […]

by Acturca
Politics.co.uk, Tuesday, 22 November 2011 By Matthew Champion As Turkish president Abdullah Gul begins a three-day state visit to the UK, the country traditionally at the crossroads between east and west finds itself facing an ancient dilemma once again. Amid the carnage of the crisis that has unfolded throughout the eurozone since early 2010, the […]

STEVEN A. COOK – Steven A. Cook is the Hasib J. Sabbagh Senior Fellow for Middle Eatern Studies at the Council on Foreign Relations at From the Potomac to the Euphrates. His book, The Struggle for Egypt, will be published by Oxford University Press in the Fall.

by Acturca
Daily News Egypt, November 22, 2011 Dani Rodrik * When questioned recently about a constitutional law professor who was arrested for lecturing at an institute run by the country?s main pro-Kurdish political party, Turkey?s interior minister, Idris Naim Sahin, couldn?t hide his irritation: ?I am having a hard time understanding those saying a professor should […]

from Hurriyet Dailynews by ANKARA – Associated Press
Erdoğan reminded Assad of the bloody end of the Libyan leader Moammar Gadhafi, as well as past dictators, including Adolf Hitler.

Once for Obama and once for Gül

by ADEM YAVUZ ARSLAN BUGÜN
Britain places a lot of importance on the visit of President Abdullah Gül, so the country had been preparing for it for days.

from Hurriyet Dailynews by LONDON – Agence France-Presse
Turkish President Abdullah Gül said there was “no place for authoritarian regimes” in the Mediterranean region, heaping more pressure on the embattled Syrian regime.

from Hurriyet Dailynews by BERLIN – Agence France-Presse
The German government admitted gross failures by the security services in dealing with a new brand of far-right ‘terrorism’ today.

by Ian Black
Foreign ministers keep up pressure on Assad to end violence, as Damascus agrees in principle to Arab League monitors in Syria

The opening of Turkey’s Syria venture

from Hurriyet Dailynews by HDN
Turkey seems to be ready to lead the mission in Syria. The government has hesitated to take a stand against Assad, when the opposition rallies first started last spring in Syria. At the time, most of the ex-Islamist writers opposed to the idea of confrontation with Syria and defined it as a trap of the imperialists to ?divide and rule? the Muslim world.

Lessons of the Arab Spring

from Today’s Zaman, your gateway to Turkish daily news :: Columnists by ŞAHİN ALPAY
The 44th annual world conference of the International Association of Political Consultants (AIPC) was held in İstanbul this past weekend. I was asked to moderate a panel titled ?Arab Spring, False Spring? Quest for Democracy or Prelude to Anarchy?? Since most of the participants were political consultants from the West, I seized the opportunity to raise a few points on the lessons of the Arab Spring they should consider sharing with their clients. With some additions, this is what I told them.

The cost of losing a European perspective

from Hurriyet Dailynews by HDN
German Justice Minister Sabine Leutheusser-Schnarrenberger said yesterday that the neo-Nazi murders revealed during investigations into the murders of eight Turks and a Greek in Germany might grow into a bigger scandal.

from Yahoo news
LONDON (Reuters) – Turkey appears to be preparing for some form of civil war in neighboring Syria, wary of any unilateral intervention but fearful fighting there could quickly escalate to a broader sectarian conflagration in the Arab world. “I observe a simmering threat in the region based on a Sunni-Shiite divide,” Turkish President Abdullah Gul said on Wednesday. “It … has the potential to ..

Turkey has a key role in Syria ? now and in the future | Simon Tisdall

by Simon Tisdall
The Arab League’s suspension of Syria has outraged Assad, but it is Ankara’s hardline stance that may yet prove decisive

Why Turkey cannot break into EU despite economic crisis

by Acturca
BBC News (UK) Saturday, 12 November 2011 By Kevin Connolly, Istanbul The eurozone crisis seems to show no sign of stopping, but for some countries outside the European Union, like Turkey, the appeal of membership remains strong. If you put your mind to it, you can write popular music lyrics about pretty much anything ? […]

Would a two-speed Europe open to Turkey?

from Blogactiv by Georgi Gotev
Whether we like it or not, the EU is becoming a two speed union. Sarkozy says there is ?too much integration? among the 27 and too little among the 17 eurozone members.

Ahmet Davutoğlu: ?No visa, no signature?

from Blogactiv by Cem
No visa, no signature, says FM Davutoğlu ? November 20th 2011
Turkish Foreign Minister Ahmet Davutoğlu said Saturday that Turkey knew the European Union (EU).
ISTANBUL- Speaking at the Session of Ministers as part of the ?World Turkish Entrepreneurs Congress? in Istanbul, Davutoğlu said that Turkey ?was playing with the rules of the EU?.

by AMANDA PAUL
Leaving İstanbul airport last week I was picked up by a very chatty taxi driver. After discovering I worked in Brussels he swiftly moved to the subject of Turkey’s EU membership. As is usually the case with taxi drivers, unlike many politicians and academics, he came straight to the point, bluntly stating, ?They [the EU] do not want us; they don’t even want to give us a visa!?