In 1991, a 30-year-old woman was sworn in as a parliamentarian in Turkey’s national assembly. After reciting the oath of allegiance, she added a sentence in her own language. As a result, she was removed from the building, stripped of her parliamentary immunity and sentenced to 15 years in prison. Her name was Leyla Zana, Turkey’s first Kurdish female MP.

The assigned mission for Zana

by HDN
An anomaly was left behind to a great extent on Saturday. With the exception of 10 deputies ? eight of them were imprisoned and thus had a ?valid excuse,? and two of them were vacant out of solidarity with the imprisoned deputies ? all parliamentarians were sworn in as Parliament started the new legislative term with an ?instruction? from President Abdullah Gül to write a ?transparent and pro-freedom new constitution.?

Who Fails; Kurds or Democracy?

by HDN
Finally, the Peace and Democracy Party, or BDP, decided to end its boycott and went to the Grand National Assembly. Everybody seems to be happy, so far. 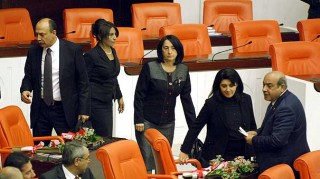 The oath and the constitution

from Journalist in Turkey, background articles, news and weblog about by Fréderike Geerdink
Saturday the Turkish parliament was opened for the new legislative year. Usually just a ceremonial procedure, this time a historic day: the pro-Kurdish BDP party ended its boycott of parliament, and thus Kurdish activist and politician Leyla Zana also returned to what now is again a bit more like the heart of Turkish democracy. Leyla

Ertuğrul Kürkçü in the Parliament with “Ten Red Carnations”

by FATMA DİŞLİ ZIBAK
Ongoing operations across Turkey against suspected members of the Kurdish Communities Union (KCK), a political umbrella organization that includes the Kurdistan Workers? Party (PKK) terrorist organization, that has so far resulted in the detention of at least 100 people, will not contribute to efforts to find a peaceful solution to Turkey?s long-standing Kurdish problem, Turkish columnists agree.

Will KCK detentions work for peace?

by FATMA DİŞLİ ZIBAK
There is a general view in the Turkish media that ongoing operations across Turkey against suspected members of the Kurdish Communities Union (KCK), a political umbrella organization that includes the outlawed Kurdistan Workers? Party (PKK), will not contribute to efforts to find a peaceful solution to Turkey?s long-standing Kurdish problem.

by HDN
After my ‘A glossary of Turkish political terms’ (Apr. 16, 2008), I gather there may be a need for an update, although this one may remain insufficient due to editorial space limitations which did not exist in 2008. All the same, some entries astoundingly remain intact!

Whither the PKK problem?

by HDN
Let?s take a closer look at how the Justice and Development Party, or AKP, government and the Kurdistan Workers? Party, or PKK, have positioned themselves as constitutional debates, on the one hand, and terrorist activities, on the other, gain pace.

Are we executing German foundations extrajudicially?

by HDN
One of the biggest strengths of the Justice and Development party, or AKP, is that it can make some decisions without any complex.

from Today’s Zaman, your gateway to Turkish daily news :: Turkish Pre by Ahmet Altan
You should question yourself and what you have done, as well as life and death, rather than that woman [independent deputy Leyla Zana]; you should be ashamed and bow your head after many years of brutality.

from Today’s Zaman, your gateway to Turkish daily news :: Columnists by ŞAHİN ALPAY
Last week I took part in two discussions. The first one, titled ?What does Turkey think?? took place in Vienna as part of a meeting jointly organized by the Bruno Kreisky Forum, the European Stability Initiative and the Center for Liberal Strategies (Sofia).

Impressions from first day of Parliament

from Today’s Zaman, your gateway to Turkish daily news :: Columnists by FATMA DİŞLİ ZIBAK
President Abdullah Gül?s speech, which mostly focused on the new constitution, the Peace and Democracy Party?s (BDP) return to Parliament, and independent deputy Leyla Zana?s return to Parliament 20 years after she was expelled for speaking Kurdish were the most noteworthy things from the first day of the new legislative year in Parliament, say columnists sharing their impressions from the inauguration ceremony on Saturday.

The Kurdish question through the eyes of Leyla Zana

from Today’s Zaman, your gateway to Turkish daily news :: Columnists by LALE KEMAL
I was curious as to how the oath taking ceremony of Kurdish deputies was going to take place in Saturday?s opening of Parliament, which was set up after the June 12 elections.

by By SEBNEM ARSU
Activists were held in a nationwide sweep tied to an investigation of insurgent attacks.

And Now For A New Constitution

by Jenny White
Parliamentarians from various parties are beginning to hold talks about what should be in the new constitution that is now on the table. Few details are available as of yet, but lots of opinion. Here?s columnist Ihsan Dagi (click here for the full column), followed by a few of my own observations: