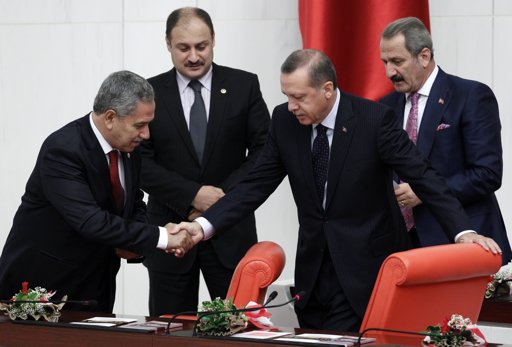 Turkey’s Prime Minister Recep Tayyip Erdogan (2nd R) shakes hands with his deputy Bulent Arinc as he arrives to the Turkish Parliament for a debate at parliament after summer recess in Ankara October 1, 2011. REUTERS/Umit Bektas

The pro-Kurdish Peace and Democracy Party?s (BDP) decision to end its boycott and return to Parliament at the beginning of the legislative term on Saturday has raised hopes for the prospect of achieving a solution to the Kurdish problem at a time of increased violence and tension in the country.

by FATMA DİŞLİ ZIBAK
Everyone is wondering whether the pro-Kurdish Peace and Democracy Party (BDP), which has been boycotting Parliament since June, will return to Parliament and be sworn in on Saturday, when Parliament begins its new legislative term.

Dissociation in the Kurdish issue

by ETYEN MAHÇUPYAN
The Kurdistan Workers’ Party’s (PKK) attacks and murders against randomly selected civilians remind a number of observers of the possibility that we might be on the verge of a civil war. It is envisaged that the state will respond to this by retaliation and that a ground operation in Kandil will lead the Kurds to resort to violence in the cities. Had we experienced this a decade ago, most probably these expectations would have come true, but we are living in a different world now. The difference is transparency.

Erdoğan and the BDP

by YAVUZ BAYDAR
As the Kurdish deputies affiliated with the Peace and Democracy Party (BDP) declared their decision to take the oath and join Parliament, Prime Minister Erdoğan did not seem to move an inch from his tough position. He mentioned the BDP in demeaning terms, but also called on all Kurds to show ?resistance? to the Kurdistan Workers’ Party (PKK).

Kurdish issue: What should be the first step?

by ESER KARAKAŞ STAR
Prime Minister Recep Tayyip Erdoğan?s proposal to ?fight against terrorists while negotiating with politicians? in order to end the Kurdish problem is a nearly perfect formula, but I do have one small objection.

by HDN
The recent rise in the number of Kurdistan Workers? Party, or PKK, attacks is making the Recep Tayyip Erdoğan government very angry, which is striving to manage the process, especially in order to decrease the speed of terrorist acts and reduce their negative impact.

by ANKARA &#8211; Hürriyet Daily News
The prime minister calls for a constitution draft before mid-2012 as his party and the opposition agree on a commission to lead the process

by HDN
Turkey?s Parliament is going to start a new legislative year on Oct. 1 with an exclusive agenda to write a new constitution for the country.

by ANKARA &#8211; Hürriyet Daily News
The Peace and Democracy Party, or BDP, received an acceptance at the highest level in Ankara as soon as it announced its decision to end a parliamentary boycott, diffusing political tension partially before the opening of the Parliament on Saturday.

Stop beating on the BDP

The return of the Kurdish deputies

by BERİL DEDEOĞLU
The decision of the Peace and Democracy Party (BDP) to return to Parliament will open space for the vitality of civil politics. This has been a difficult decision for them because there are people in this political party who still believe that their voices will not be heard in Parliament and that the governing party, which enjoys a comfortable majority, doesn’t even care to listen to the BDP’s demands.

by Emre Aköz Sabah
There are those who were happy to hear that the pro-Kurdish Peace and Democracy Party?s (BDP) parliamentary deputies have decided to take their oaths and join in the work of Parliament.

by FATMA DİŞLİ ZIBAK
Recent statements by President Abdullah Gül about a helicopter crash in which Grand Unity Party (BBP) leader Muhsin Yazıcıoğlu and five others lost their lives in 2009 have made it almost certain that the crash was not an accident but an assassination.

from Hurriyet Dailynews by MALATYA – Doğan News Agency (DHA)
Seven suspects, including four active-duty soldiers, were arrested Sunday in connection with the alleged disappearance of devices containing flight information from the helicopter crash that killed the Great Union Party, or BBP, leader.

Was Yazıcıoğlu a secret witness?

by HDN
The helicopter accident investigation into Great Union Party, or BBP, leader Muhsin Yazıcıoğlu?s death entered a new stage with an operation the other day.

Is a solution still likely?

by FATMA DİŞLİ ZIBAK
Nowadays, the most important agenda item in Turkey is the outlawed Kurdistan Workers? Party (PKK), which has recently stepped up its violence, killing dozens of civilians and security officials across the country, and how the problem of terrorism can be resolved.

by MÜMTAZER TÜRKÖNE
What Prime Minister Recep Tayyip Erdoğan says is explicit. The government has initiated a new process against the Kurdistan Workers’ Party (PKK). The new part in the remark ?Combating terror, negotiating with politics? is important.

PKK’s target is the AK Party

by ERGUN BABAHAN
Analysts who have received reliable information from police intelligence sources report that the Kurdistan Workers’ Party (PKK) is apparently pursuing a plan that would force the government to step down within the next six months.

by KLAUS JURGENS
This Saturday Turkey’s lawmakers are back in the capital city of Ankara as Parliament begins a new legislative period. Although over the upcoming months many important items will form part of Parliament’s day-to-day agenda, one overarching issue is most definitely going to dominate proceedings: the drafting of a new, civilian constitution.

Reasons behind PKK attacks on teachers

by FATMA DİŞLİ ZIBAK
The outlawed Kurdistan Workers? Party (PKK), which recently increased attacks on civilians, has begun to target teachers in particular, through both armed attacks and kidnappings.

TAK, an armed wing of the Kurdistan Workers’ Party, assumed responsibility for the explosion of a minibus in Ankara on 20 September. Three people died in the blast.

A soldier and two village guards were killed in armed conflicts with the PKK in Van. An attack on a police team in Diyarbakır left one police officer dead. A total of twelve people died in armed clashes within the past four days.

Enter a rough period of war with the PKK

from Hurriyet Dailynews by HDN
The Turkish state is outlining a brand-new approach in the fight against terrorism by the outlawed Kurdistan Workers? Party, or PKK.

What is the Kurdish question? , Ruwayda Mustafah Rabar

from open Democracy News Analysis – by Ruwayda Mustafah Rabar
What is the Kurdish question? When assessing this tragic history, it is essential to see what Kurds have endured for years, not just in Turkey.