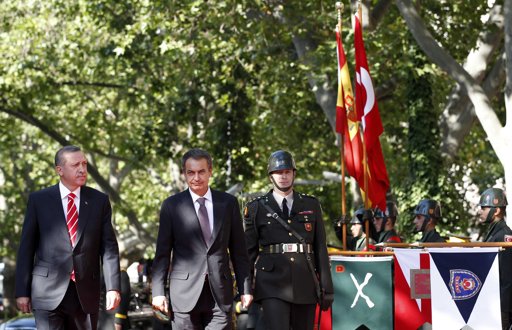 US Ambassador in Ankara Francis Ricciardone said on Thursday that Turkey and Israel should definitely keep diplomatic channels open.

A row between the ruling party and the main opposition over handling the current crisis with Israel escalated Thursday.

Turkish warships will escort any Turkish aid vessels to Palestinians in the Gaza Strip, Recep Tayyip Erdogan, the prime minister, has announced.

He also said Turkey had taken steps to stop Israel unilaterally exploiting natural resources from the eastern Mediterranean, according to al-Jazeera’s Arabic translation of excerpts of an interview conducted in Turkish.

from Today’s Zaman, your gateway to Turkish daily news :: Columnists by BÜLENT KENEŞ

In my Wednesday article, I tried to analyze the Turkish-Israeli tension from the perspective of domestic politics in both countries, drawing attention to the fact that the psychological, socio-political climate is depriving Israel of a rational and effective leadership. In this article, I will try to peer into the historical and conjuncture-related reasons of the tension that has recently erupted between the two countries.

Erdoğan and the Gaza visit

Prime Minister Recep Tayyip Erdoğan has recently voiced a tentative intention to visit the Gaza Strip in the next few weeks, noting that such a visit would take place after an assessment of the issue by the Foreign Ministry.

from Today’s Zaman, your gateway to Turkish daily news :: Interviews by Hani Abueshiba

Over the past few days, the common theme among editorials has been that Turkey’s decision to expel the Israeli ambassador and withhold all new military agreements was not entirely surprising.

Visit to Gaza is not the issue

from Today’s Zaman, your gateway to Turkish daily news :: Columnists by YAVUZ BAYDAR

Thanks to a well-rooted democratic tradition, more and more voices of reason and cries of conscience are being heard from Israel, despite the fact that its society, to a large extent, resembles a bunch of sleepwalkers, which reminds one of the great author Hermann Broch, oblivious to the massive changes taking place in the region.

Turkey’s prime minister says his country will in future escort aid ships travelling to the Gaza Strip, amid an escalating row with Israel.

Amnesty International has said it stands by its initial response to the report into the Gaza flotilla, despite the human rights group focussing almost solely on the UN’s findings against Israel.Following the publication of the Palmer Report, Amnesty International issued a statement which made no mention of the report’s criticism of Turkey for failing to do enough to stop the flotilla.An Amnesty spokesman later said: “Our statement focuses on the Palmer report’s findings on Israel? because our analysis focuses on the human rights violations that occurred during the 2010 raid on the flotilla.”

A United Nations review found that Israel?s naval blockade of Gaza was appropriate, but the way commandos boarded a flotilla trying to break the blockade was excessive.