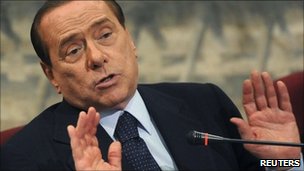 from BBC News | Europe | World Edition
Share prices in British banks have fallen amid fears that Italy could be the next Euro-zone country to need a financial bail out.

from Ideas on Europe by euro-thoughts
As EU leaders attempt to steer through the ongoing debt crisis in the Eurozone, it seems that short-term, temporary fixes are the central focus, while long-term solutions that will help to prevent future crises have received far less consideration. This is not so surprising, as the immediate challenges posed by a possible Greek default or spreading contagion to Italy, the Eurozone’s third-biggest economy, surely warrant a great deal of policy makers’ attention. However, there is also a need to address long-term challenges to the stability of the Eurozone, which requires honest reflection on the difficulty of maintaining a monetary union between such a diverse set of economies, with little supranational economic governance.

Europe to be blamed for Belgium crisis

from Blogactiv by Georgi Gotev
Belgium is descending into new chaos.  In a nutshell,  Flemish separatist N-VA leader Bart De Wever has given Waloon Socialist leader Elio di Rupo the middle finger, as Het Nieuwsblat described it. He was able to do so, because CD&V, the Flemish centre-right party, is siding with N-VA. The resulty is political paralysis which can lead the country to death.

from RAND: Features: Featured Research
Although most European terrorism plots of jihadist inspiration over the last five years appear to have been conducted independently, the most serious ones have tended to involve operational connections to groups operating outside of Europe.

by AMANDA PAUL
Earlier this month Poland took over the EU’s rotating presidency. The Poles have been preparing for their moment in the sun for at least two years and therefore there are high expectations for Warsaw to produce good results. Coming after the Hungarian presidency, that may not be too difficult.

by Grahnlaw
Ensuring the free movement of goods, persons, services and capital is an ongoing work in Europe, since the launch of the common market by the 1957 EEC Treaty. Professor Mario Monti assessed the need for progress in his report to Commission president José Manuel Barroso:

Mario Monti: A new strategy for the single market – at the service of Europe's economy and society (9 May 2010)

The Flotilla, the Greeks and Israeli Hasbara in Overdrive

from WhirledView by Patricia H. Kushlis
By Patricia H. Kushlis
In this year’s tussle between the Israeli government and European and North American peace activists whose aim is to highlight the five year Israeli blockade of Gaza through a high visibility freedom flotilla of small boats attempting to run it and deliver aid and mail, the Israeli government is stuck in overdrive, an overdrive that began weeks – perhaps months – before the boats were even to have set sail.  The goal:  to prevent them  from leaving port and thereby to avoid a repeat of last summer’s disaster.

from FT.com – World, Europe
Future of Giulio Tremonti, the finance minister, is of greatest concern after prime minister's criticism of his three-year package

from FT.com – World, Europe
European leaders are prepared to accept Athens should default on some of its bonds as part of a new bail-out plan

The European Commission published its proposals for the 2014-2-20 EU budget at the end of June. The British media were incensed about proposals for new ‘EU taxes’, a planned nominal rise in EU budget spending at a time of austerity and alleged threats to the British rebate. However, rather than focusing on the British net balance, the Cameron government should make a strong and constructive case for thorough budget reform. The Commission’s proposals are a missed opportunity.

by Grahnlaw
The first part of the Digital Agenda retrospective appeared here.
Industry views on the coming European Digital Agenda and an own-initiative report in the European Parliament preceded the publication of the communication from the Commission 19 May 2010: A Digital Agenda for Europe.

The dual nature of the Greek crisis

Did Latvia really lose that much competitiveness???

from euro|topics
Coalition talks in Belgium are back at square one again. Elio Di Rupo, the Socialist assigned with forming a government, on Friday asked King Albert II to relieve him of the task but so far his request has been turned down. If a government does not start fighting the huge national debt soon, according to the press, the EU will also be affected.

Cameron on Murdoch: how his language reveals the crisis in British democracy, Anthony Barnett

from open Democracy News Analysis – by Anthony Barnett
British Prime Minister David Cameron gave a press conference on the scandal of Murdoch's tabloid hacking and suborning the police. In it he produced a new definition of democracy. What does it signify?

The government of Cyprus has utterly failed – They must resign immediately

What’s in a meeting?

from Behind the Scenes by Honor Mahony
So we all know that EU council president Herman Van Rompuy is fond of a good meeting. When he first took on the post, he famously said he wanted EU leaders to gather 12 times a year.
The response: the silence of the seeds of an idea falling on thoroughly non-fertile soil. He modified the original suggestion to a somewhat vaguer let’s-meet-more-often.

from FT.com – World, Europe
The state providing less means hard work and ability no longer guarantee success, and there is a widespread sense things are becoming more difficult

In Defense of Decadent Europe: Is it “the best place on Earth to be born”?

from euro|topics
The risk premium for Italian state bonds soared to an all-time high on Monday after Italian leader Silvio Berlusconi criticised his finance minister's planned austerity programme. The crisis is homegrown, the press believes and calls for rapid action both in Rome and in Brussels to save the shaky euro.

Hungary’s choices one year on: in the land of ‘Revolutionary Voting Booths’, Yudit Kiss

from open Democracy News Analysis – by Yudit Kiss
The EU has to deal with a government that came to power democratically and uses its power to dismantle the democratic institutional system. Fidesz' ‘solutions’ are desperately wrong. But the problems are real. Europe can only offer attractive alternatives to its peoples, if it finds viable solutions to these problems. What happens in Hungary is not the internal affair of 10 million Hungarians. It is a litmus test for Europe's capacity to defend its basic democratic values.