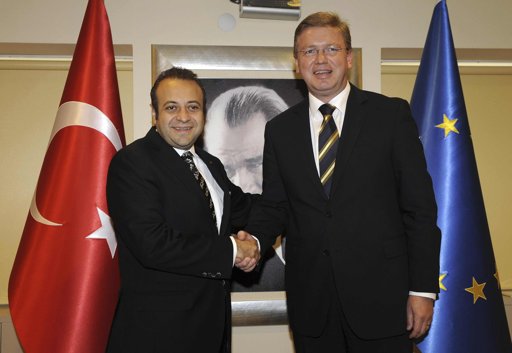 from Hurriyet Dailynews by ANKARA- Hürriyet Daily News
Opposition leader Kemal Kılıçdaroğlu meets with EU Enlargement Commissioner Stefan Fuele. During a press meeting Fuele says the commission was pleased that the CHP deputies have taken their oaths in Parliament

by ANKARA- Hürriyet Daily News
Stefan Fule, the European Union commissioner in charge of enlargement, will not meet either Turkey’s president or prime minister Wednesday in Ankara following talks in Istanbul with the business community.

from Yahoo news
Turkey warned EU on Wednesday that relations between EU and Turkey would freeze if Greek Cypriots took over European Union (EU) Presidency in 2012 before a solution over Cyprus dispute is reached.

Is the road heading back toward the EU?

by HDN
The most striking aspect of the 61st government’s program being debated in Parliament (even if it is not so much of a surprise to many observers) is the strong emphasis it has given to the goal of full membership in the European Union.

by HDN
It’s very interesting to see that the two-week long oath-taking crisis of the main opposition party has ended just a day before Stefan Fule, the European Union’s commissioner responsible for enlargement, visits Turkey.

Most European citizens (for example, more than 60 percent in France and Germany) believe that Turkey should not become part of the European Union. There are various reasons for this opposition — some valid, some based on prejudice: Turkey is too big; Turkish migrant workers might swamp other members; Turkey has a shaky human rights record; Turkey oppresses the Kurds; Turkey hasn’t solved its problems with Greece over Cyprus.

Is a Turkish-Israeli reconciliation imminent? by Alon Ben-Meir*

from Today's Zaman, your gateway to Turkish daily news :: Interviews
The fact that Israeli and Turkish officials have begun to renew dialogue at a time of significant uncertainty and turmoil in the broader Middle East is, of course, no coincidence.

Israel has no need to beg for reconciliation with Turkey, an apology is enough

by KERİM BALCI
Tuesday's Haaretz daily published an article written by renowned Ottoman and Middle East historian Professor Ehud Toledano on reconciliation efforts between Israel and Turkey. Toledano's article was titled “Israel has no reason to beg for reconciliation with Turkey” and subtitled, “Why should Israel get down on its hands and knees and apologize, anyway?”