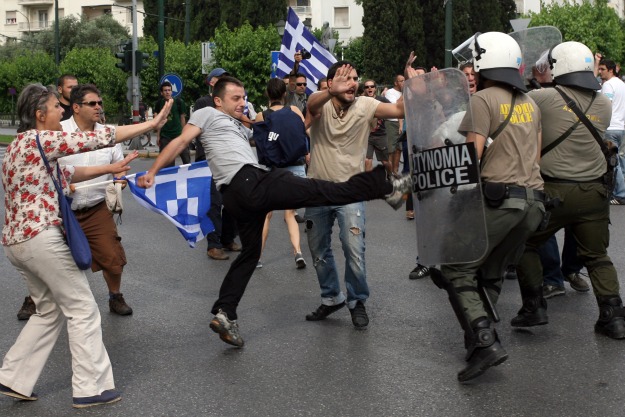 “Greece burns ? when will Europe stop fiddling?” by Andrew Watt

from Social Europe Journal » Blogs by Andrew Watt
Greece is visibly descending into a major political and social crisis. Violent demonstrations on the streets. Political infighting. The imminent collapse of the government. Does anybody really believe the crisis can be resolved by replacing the finance minister, Papaconstantinou, by former ECB…

from euro|topics
Greek Prime Minister Giorgos Papandreou will reshuffle his cabinet today and ask for a vote of confidence on Sunday. In this way the socialist hopes to bolster his party’s ability to govern in the face of ongoing protests rocking the country and Wednesday’s failed talks with the opposition. The press says Papandreou is the right man for the job and demands more money for Athens, including from the banks. 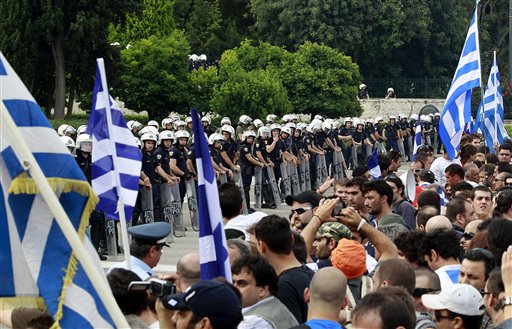 Beside the general aggression and violence which marked this Wednesday in Greece, the call for a national strike and the symbolic blocking of Parliament was relatively successful. According to a local correspondent, at least 100,000 people gathered in today Syntagma, the major square of Athens, to protest against the plans of austerity accorded between the Greek government, the IMF and the European Bank. Apart from some private sector businesses which did not follow the strike that was programmed a week ago, all public institutions were closed today. Rallies took place in different parts of Athens, although with more intensity in Sintagma main square, and all other important cities of Greece.

from WL Central by Bivol

from Blogactiv by Georgi Gotev
Commission President Jose Manuel Barroso has asked all the Commissioners to provide him with material, preparing the Commission proposal for the next long-term EU budget, sources tell me.  The proposal will be made public before the end of this month.

from euro|topics
The Eurozone finance ministers failed to agree on a second rescue package for Greece on Tuesday in Brussels. The major bone of contention is Germany’s demand that private investors share the costs. The press weighs up the pros and cons but overall sees little hope for beleaguered Greece.

from open Democracy News Analysis – by Sahiba Trivedi
China’s development of a space programme threatens to increase Sino-US tension as the latter’s dominance of space, with all its military and commercial potential, is undermined.
China?s sky-high space ambitions have the potential to upset the current world order. Within the coming decade, China may become capable of challenging America?s dominance over space and its monopoly over global navigational systems.

from Social Europe Journal by George Irvin
The answer is ?yes??ostensibly, Greece has defaulted. This de facto debt repudiation follows from several factors: first, the Greek austerity measures are clearly not working given that its GDP contracted 5.5% in 2011Q1 and the debt/GDP ratio rose to 140%; secondly, last Monday the S&P.