A new decree to free officials jailed for corruption has sparked outrage across Romania.

Aljazeera.com–3 hours ago
“I do not want to divide Romania,” a pale and tired-looking Grindeanu said in a televised address, sparking cheers and celebrations late into . “I won’t have to tell him his father was a coward,” business minister Florin Jianu said of his young son, as tens of thousands marched against a law that would protect corrupt officials.
Romania protests: Children central to anti-government rally
BBC News | Europe | World Edition Parents explain why they have brought their children to anti-government protests in Bucharest.
Debate: Mass protests against corruption in Romania
euro|topics
Bucharest is currently experiencing its largest demonstrations for the past 26 years. On Thursday evening almost 90,000 people once more marched against the government’s controversial decrees. The measures, which are viewed as a bitter setback for the fight against corruption, would among other things ease punishment for corrupt officials. The government hadn’t reckoned with such a mass mobilisation, commentators agree.
Romania to withdraw corruption decree after mass protests
BBC News | Europe | World Edition The country’s PM says the decree decriminalising some corruption offences is to be repealed. 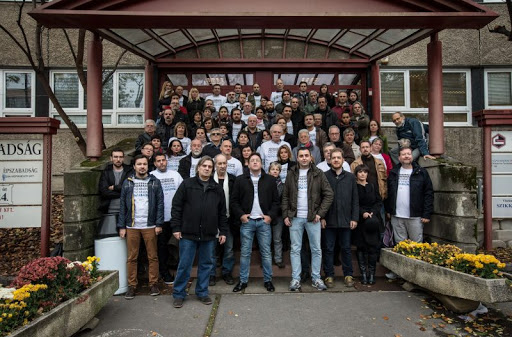 The staff of Népszabadság. Used with permission from “Népszabi” editorial team Facebook page.

A Hungarian court has ruled that the sudden closure of leading opposition daily Népszabadság last October was illegal, because its owners should have consulted with the employee committee in a bid to keep publishing and avoid laying off all its staff. Anger over Donald Trump’s immigration crackdown grows as the PM says she looks forward to his visit. Former European Parliament President Martin Schulz slammed Donald Trump for planning to build a wall at the US-Mexico border and supporting torture during a speech today (29 January) after Social Democratic Party leaders endorsed him as their candidate to take on Angela Merkel. The Social Democrats hope he can unseat Chancellor Merkel in September’s election.

Debate: Does SPD have a chance of winning with Schulz?

euro|topics
The SPD officially designated Martin Schulz as its candidate against Angela Merkel in Germany’s parliamentary elections. Recent polls show that Schulz is gaining support for his party, which has jumped up three points to 24 percent. The polls also show that if the chancellor were directly elected to office the ex-president of the European Parliament would garner 41 percent of the vote – as much as Merkel. This prompts the press to re-examine Schulz’s chances of success.

Benoit Hamon to be Socialist candidate in French election Debate: Are May’s good ties with Trump dangerous for EU?

euro|topics
At their meeting in Washington US President Donald Trump and British Prime Minister Theresa May stressed the common ground between their countries. Trump announced that the Brexit will be “fantastic”, while May emphasised the importance of a bilateral trade agreement. Commentators warn that the British PM’s visit should sound alarm bells for the EU.

In the same week that GCHQ chief Robert Hannigan stepped down and the man responsible for the 2014 Celebgate nude photo hack was jailed, a mobile phone insurance firm released findings of their research into internet privacy. The survey, which was given to British adults across the country, found that internet privacy is very important to one in every three people, and 15% describe their feelings as being worried about personal device surveillance and tracking.