News in Turkish here
And the failed coup attempt leads to a purge in higher judiciary and military circles.. A roundup…

A total of 2,839 soldiers have been detained over the charges of coup attempt, Prime Minister Binali Yıldırım said July 16 in a press briefing.

Turkey’s commander of air forces was taken hostage while attending a wedding on July 15, by soldiers that have engaged a failed coup attempt

Footage shown on CNN Turk shows military officers, who were barricading the Bosphorus bridge in Istanbul, surrendering on Saturday morning. Earlier, Turkish President Recep Tayyip Erdogan addressed thousands of flag-waving supporters outside Istanbul’s Ataturk Airport on Saturday telling them he is in charge and the coup won’t succeed. It comes after elements of the military attempted a coup on Friday evening Even though the coup attempt appeared to be failing by early Saturday morning in Turkey, the country has suddenly become another tumultuous one in a region that knows no end of turmoil.

Attempted coup in Turkey – in pictures

After a night of chaos and bloodshed that saw an army faction try to oust a civilian government in Turkey for the fifth time in 60 years, retribution begins

A photographer of the Yeni Şafak daily newspaper, Mustafa Cambaz, has lost his life after being gun fired by a group of soldiers who have staged an attempted coup

Protesters in Turkey Take On Military

NYT > Turkey by By REUTERS
Turks climbed aboard tanks and roughed up soldiers in Istanbul early Saturday, after the military attempted a coup Friday night.

NYT > Turkey by By REUTERS
More than 2,800 personnel across Turkey were rounded up after the attempted coup on Friday.

Only hours after a coup attempt the Supreme Council of Judges and Prosecutors (HSYK) has sustained 2,745 judges on July 16, apparently because they are suspected to be linked to the U.S.-based Fethullah Gülen

Turkish president Recep Tayyip Erdogan tells his nation on Saturday that his government is working to crush a coup attempt after a night of explosions, air battles and gunfire that left dozens dead and at least 150 people wounded.
Erdogan called the coup plot a “betrayal” adding that those responsible will “pay a very heavy price”

Turkish police arrest a soldier in broadcaster CNN-Turk’s offices on Saturdaymorning. It comes after soldiers entered the Dogan Media Centre in Istanbul building early on Saturday morning, brandishing machine guns and telling employees to vacate the building. The station is back on air after police apparently entered the building and arrested soldiers who had taken it over 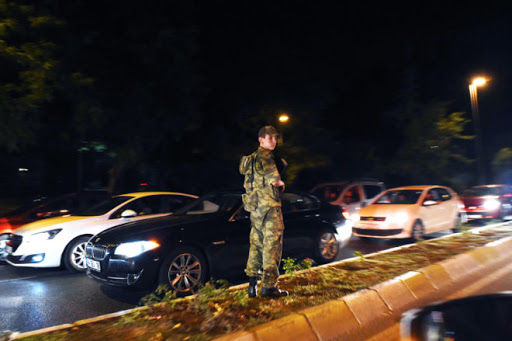 On Friday afternoon the images started rolling in on Twitter. Was it a terror attack, or a coup? We quickly learned.

A summary of what we know so far about the attempted coup in Turkey on Friday night that saw at least 194 people killed and 2,839 arrests. A faction of the Turkish military attempted to overthrow president Erdogan but failed as Erdogan supporters and forces loyal to the government resisted the insurrection

Turkey has had several military coups in its modern history. A historian explains why.
Vox
RB: That was called the Ergenekon affair. There was evidence of plans for a coup that surfaced, and that became central in these trials that convicted leading military figures and removed them from power and put them in jail. Most of those generals …
Turkey’s Erdogan Avoids Fate of Egypt’s MorsiWall Street Journal
What’s Going On in Turkey?The Atlantic
A brief history of recent military coups in TurkeyQuartz
NBCNews.com –Santa monica Observed –Hindustan Times
all 3,059 news articles »

Any country that would harbor Fethullah Gülen, the leader of the parallel state that is regarded as the mastermind of July 15’s coup attempt would not be Turkey’s friend, the Turkish prime minister has said By noon, there were few signs that those who had taken part in the coup attempt were still able to challenge the government, and many declared the uprising a failure.

Turkish President Recep Tayyip Erdoğan appears on television through a FaceTime video connection to address the nation as a coup threatens to topple the government. People claiming to speak for the Turkish military said the army was now in charge of the country

U.S. President Barack Obama and Secretary of State John Kerry agreed that all parties in Turkey should support the democratically-elected government of Turkey while Kremlin expressed its grave concerns over the recent developments.

News of an attempted military coup in Turkey, with soldiers manning strategic points in Ankara and Istanbul and sudden announcements in the media, is a throwback to more unstable times – but appears to reflect growing unease in a country disenchanted by the rule of an unpopular president.

At 8am on Saturday, there were still tanks on the Bosphorus bridge. They stood on the tarmac that links Istanbul’s Asian and European shores, their turrets pointing at jaunty angles – as they had since 9pm on Friday, when their sudden appearance gave the first hint that a coup was under way.

Tourists advised to be vigilant in Turkey following coup attempt

The new foreign secretary, Boris Johnson, has expressed grave concern about the attempted military coup in Turkey, urging an end to the bloodshed and advising British tourists to closely monitor official Foreign Office advice about travel to and from the country.

PM Yıldırım Calls on People to Take to Streets

Prime Minister Binali Yıldırım in the press statement he has held together with the Chief of General Staff General Hulusi Akar has called on the people to take to the streets also this evening.

TRT National Television Newscaster: They Forced Me to Read Declaration

Turkish Radio and Television Corporation newscaster Tijen Karakaş has gooing live on CNN Türk has noted: “Our hands have been tied in the back. They have threatened me with a gun and forced me to read a declaration”.
Coups and Plots in Turkey Over Past 50 Years
NBCNews.com
The shadowy Ergenekon group first came to light when a cache of explosives was discovered in a police raid on an Istanbul house. Eventually hundreds of people went on trial for an alleged coup attempt against then-prime minister Recep Tayyip Erdogan, …
What’s Going On in Turkey?The Atlantic
A brief history of recent military coups in TurkeyQuartz
One-time ally who became Erdogan enemyFinancial Times
Haaretz