Ahmet Davutoğlu, Turkey’s prime minister, was keen to make a point. All the evidence suggested that the Syrian Kurdish People’s Protection Units (YPG) were responsible for Wednesday evening’s car bomb in Ankara that killed 28 people, he declared on the morning after the attack. KCK Executive Council Co-Chair Bayık has stated on Ankara attack; “We don’t know who has carried it out. But we know from earlier that there have been such practices of retaliation for the massacres in Kurdistan”.
In Photos: Turkey in mourning day after attack kills 28 in Ankara

Turkey is in mourning a day after a car bomb attack targeted military personnel shuttles in the nation’s capital, killing 28 PYD Co-Chair Salih Müslim has noted that they were in no way related to the attack in Ankara killing 28 persons and has denied Davutoğlu’s statement.

At least 500 rebels on Feb. 17 crossed the Turkish border heading for the Syrian town of Azaz in northern Aleppo province, a monitor said, where opposition forces have suffered setbacks at the hands of the YPG forces

NYT > Turkey by By CEYLAN YEGINSU
The assailant, who struck a military convoy in the heart of Ankara during the evening rush, was identified by the prime minister as Salih Necar.

The Turkish parliament has failed to release a joint declaration condemning a suicide bomb on Feb. 17 that targeted a military convoy in Ankara, due to objections on the statement’s wording by one of the four political parties represented at the national assembly

World news: Turkey | guardian.co.uk by Ranj Alaaldin
Conflict with the PKK might be useful for a president seeking to bolster nationalist support but a peace process must now be sought if a damaging rift with the US isn’t to open

A delegation from the European Parliament’s (EP) Socialist Group, including EU Turkey rapporteur Kati Piri, is set to pay a visit Feb. 19 to the Sur district of southeastern Diyarbakır province

Opposition parties have pointed the finger at Turkey’s intelligence and security agencies for failing to stop the deadly terrorist attack in the capital Ankara that killed 28 people on Feb. 17

This week’s bombings in Turkey show that the country must radically realign its policies around the pursuit of peace with its own KurdsTurkey’s misguided policies have been taking that pivotal country in the wrong direction for several years. Now the errors and contradictions apparent in its domestic politics are becoming a major international problem, threatening to widen the conflict wracking the region in which until recently it was a force for stability and sanity.

Turkey is sinking into the quagmire of Syria With urban conflicts and major terrorist attacks, Turkey is looking more and more like its war-ravaged neighbour.

Why Azaz is so important for Turkey Why Azaz in Syria is so important for Turkey

In Turkey, the regime slides from soft to hard totalitarianism

The resemblances to interwar Italy are unmistakable, and the results are gradually turning out to be almost as fatal.

“Humanitarian aid to [civilians] must be allowed immediately. ‘Surrender or starve’ tactics are directly contrary to the law of war.”

Nobody asks who those are in the basement, or why the Patriotic Revolutionary Youth Movement (YDG-H) would open fıre on an ambulance which comes to pick up those wounded people.

Aerial view of Cizre and Tigris, Turkey. Wikicommons/Rahman Abubakr. Some rights rserved.Everything is happening before our very eyes! 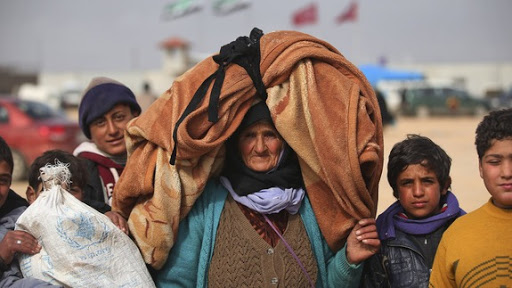 The European Union has urged Turkey to open its borders to tens of thousands of Syrians fleeing Russian bombs and pro-government forces laying siege to the city of Aleppo.

Some 1,300 Syrians are currently jailed in Turkey, Justice Minister Bekir Bozdağ announced, noting that 2,400 Syrians in total have been imprisoned due to arrests or convictions