The Rise Of Terrorism Inspired By Religion In France

The terrorist attacks at six sites in and around Paris on Friday, which French authorities said killed 129 people and injured more than 350, claimed more lives than all other acts of terror combined in the previous quarter century in France, according to the Global Terrorism Database. 10 The victims came from at least nine countries; scores were attending a rock concert, some were eating dinner at a Cambodian restaurant, two were sisters from Tunisia who were celebrating a birthday, according to Le Figaro.

Paris attacks give EU leaders excuse to get tough on refugees

Reports of a Syrian passport found near the body of one of the gunmen who died in Friday night’s attacks may change attitudes towards migrants across Europe. The EurActiv network reports.

VIDEO: ‘People falling, screaming, clawing to get away’

Michael O’Connor describes what he saw at the Bataclan concert hall in Paris when gunmen broke in.

Everything we know about the Paris attack victims

The terrorist attacks that gripped Paris late Friday and early Saturday left at least 129 people dead, and wounded more than 300 others. The majority of victims were gunned down during a rock concert at the Bataclan, a historic venue in the 11th arrondissement. Several were killed at multiple other sites.

France says it will keep striking ISIL in Iraq and Syria after group claimed responsibility for attacks that killed 129.

Meet Jean Jullien, The Artist Behind The “Peace for Paris” Symbol

Last night, this simple symbol became a universal sign of support for the city of Paris. We spoke to Jean Jullien, who created the symbol, about how it came to be.

How to Regain Control of Europe
Slate Articles by Anne Applebaum

This article is an updated version of an article written before the attacks.

The Paris atrocity, and after
open Democracy News Analysis – by Paul Rogers

ISIS’s violent assaults in France’s capital should lead to a political rethink among western leaders. But will they?

For the terrorists, best would be to be left alone to consolidate. Next best would be an epic all-out confrontation with western infidel ground forces. We should not give them what they want.

After Paris, macho language about “pitiless war” defines the contours of leadership. Little else is on offer. It is red meat to our emotions.

Demotix/Elyxandro Cegarra. All rights reserved.A week of horrible carnage – bomb blasts in Beirut and Baghdad and then the cold-blooded shootings in Paris. Each of these acts of terror left dead bodies and wounded lives. There is nothing good that comes of them – only the pain of the victim and then more pain as powerful people take refuge in clichéd policies that once again turn the wheel of violence.

Witnesses have been describing the scenes of horror that unfolded cross Paris on Friday night as attackers struck in multiple locations.

Hashtag that tried to help on France’s dark night

The #PorteOuverte hashtag on Twitter helped people in Paris find shelter after the attacks.

Machines, not migrants, are the threat to jobs 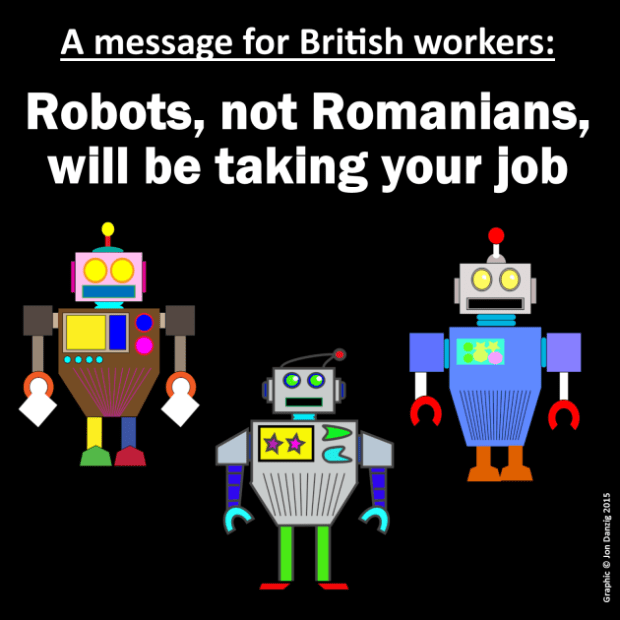 Eurosceptics often complain that migrants are taking British jobs and bringing down wages, especially in the low-skills sector. But the real threat isn’t from migrants – it’s from machines and robots that are predicted to replace half of all British jobs within twenty years.

Site’s “safety check” feature was implemented immediately after attack in Paris but not after bombing in Beirut.

World leaders responded to deadly attacks in Paris with defiant pledges of solidarity and Europe tightened security after Islamic State said it was behind an assault by gunmen and bombers that left 127 dead in the French capital.

The demon of Death, a letter from Paris

The real goal of the attacks in France, as well as those in the Shia southern suburb of Beirut a few hours before this, is through fear, to spread division.

Police investigations outside the Bataclan concert hall in Paris, November 14. Demotix/ Jonathan Tessier. All rights reserved.It was like spring in autumn. The weather had been turning warm, day after day, in this early November 2015 in Paris. One month later the town will host the UN Climate Conference COP21… Such unseasonable weather, the hottest November ever, must for sure have something to do with climate change.

Paris has been hit at its heart

The roots of these terror attacks are deep. They lie partly in Syria and Iraq, but also partly in our French and European cities.

After Paris attacks, cities around the world light their landmarks in support

Soon after last night’s attacks on Paris, in which more than 120 people were killed, other cities began projecting the colors of the French flag onto landmarks in a brilliantly colored display of solidarity around the world.

After Paris attacks, people stand up for Muslims with #TerrorismHasNoReligion

In the wake of the deadly attacks in Paris on Friday night, new hashtags meant to defend Muslims are trending online.

For many Syrians in the Calais refugee camp in northern France, the terror attacks in Paris on Friday night were particularly disturbing.

A 23-year-old design student from Cal State University-Long Beach named Nohemi Gonzalez is the first American identified among the victims of Friday’s attacks in Paris in which at least 129 people were killed.

Parisians Use #PorteOuverte to Help Those Seeking Shelter after Paris Attacks

Social Media Today by Pete Schauer
Following the devastating ISIS attacks in Paris in which at least 128 people were reportedly killed in six incidents on Friday, according to CNN, social media became a hub for shelter for people who were stranded on the streets after the attacks.

Twitter is working with CBS News to bring the questions users are asking about the Paris attacks to the people who could be the next commander-in-chief.

Cartoonists and illustrators took to social media on Friday and Saturday to share their drawings in response to the deadliest peacetime attack to hit France.

What We Know about the Paris Attackers

On Friday eight attackers in different parts of Paris shot and killed 127 people in seemingly coordinated attacks. The act has since been claimed by extremist group the Islamic State, or ISIS, raising serious questions about the extent of extremist influence in France and the likelihood of further violence.

The deadliest location among Friday’s terror attacks in Paris occurred at a concert venue called Le Bataclan, where Californian rock band Eagles of Death Metal were performing before an audience of 1,500 people. According to police reports, several gunmen opened fire at visitors mid-concert, killing more than a hundred people and injuring dozens more

France is reeling from a wave of horrific terrorist attacks in central Paris late Friday night, killing at least 127 people, critically wounding at least 99 and injuring hundreds more in multiple parts of the city.

The Paris massacre and the Syrian refugee crisis

Eriksen’s blog
Two dramatic events, one unfolding over the last several years, the other a sudden shock, currently eclipse all other issues. Syrians desperate to escape their broken country enter neighbouring and European countries in huge numbers, and a handful of bloodthirsty fanatics have killed over a hundred random, innocent people in Paris. These events both form […]

VIDEO: How will Paris cope after attacks?

BBC correspondent Matthew Price assesses the mood on the streets of Paris the day after multiple attacks killed at least 127 people in the French capital.