10 gadgets for the bookworm in your life

Everyone knows one of them. They always have their nose stuck in a book, they don’t go anywhere without one and they are perennially asking you if you’ve read the book version of that movie that just came out. Bookworms. Book lovers. Bibliophiles

The 75 best-edited movies of all time
kottke.org by Jason Kottke

From the Motion Picture Editors Guild, a list of the 75 best-edited movies of all time.

As for directors, Alfred Hitchcock is the most often cited, making the list 5 times (although not placing in the top 10), and spanning 3 decades. Right behind him are Steven Spielberg and Francis Ford Coppola, both of whom made the list 4 times. Like Hitchcock, Spielberg’s pictures were released over 3 decades. Coppola’s pictures, however, were all released in the 1970s – with 2 in 1974 (the only director with 2 films in a single year). All of his pictures placed in the top 22 films, with 3 of them in the top 11. At the other end of the continuum, there were 33 years between Terrence Malick’s 2 films on the list.

Based on about 14 million reviews on RateMyProfessor, this tool by Ben Schmidt lets you compare words used to describe professors, categorized by gender and discipline. For example, the above is the usage rate of “smart” in reviews, and you see lower rates with professors who are women than for men, for every discipline. This is true when you look at all reviews at once, just positive ones, or just negative ones. 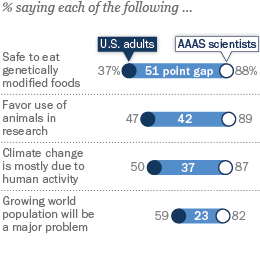 The public and scientists express widely differing views on science-related topics, but agree that K-12 STEM education in America falls behind other nations, according to a pair of surveys conducted in collaboration with the American Association for the Advancement of Science. FULL REPORT >

After the war ended, Churchill ordered all of Bletchley’s work — the computers, the notebooks — destroyed, but some of Alan Turing’s notes were discovered between the walls of Hut 6 during a recent renovation, and are now on display at Bletchley Park. Read the rest

The medieval travelogue presents present-day writers and artists with an abundance of material. Written in an age when the boundaries between fiction and non- were not so sharply drawn, early explorers and sailors had little compunction about embellishing their tales with exaggerations and outright lies. Travelers circulated stories of giants and monsters and credulous readers back home swallowed them whole. Well, sometimes. In the case of the most famed medieval traveler, Marco Polo, scholars have debated whether Il Milione—one of the titles of a narrative based on his accounts—refers to a family nickname or to Polo’s reputation for telling “a million lies.” But whether Polo told the truth or not hardly mattered to Italo Calvino, who found in the explorer’s colorful tales just the inspiration he needed for his 1972 novel Invisible Cities.

“To Kill A Mockingbird” sequel announced for July

Author Harper Lee announces the publication of a second book, 50 years after her Pulitzer Prize-winning novel came out.